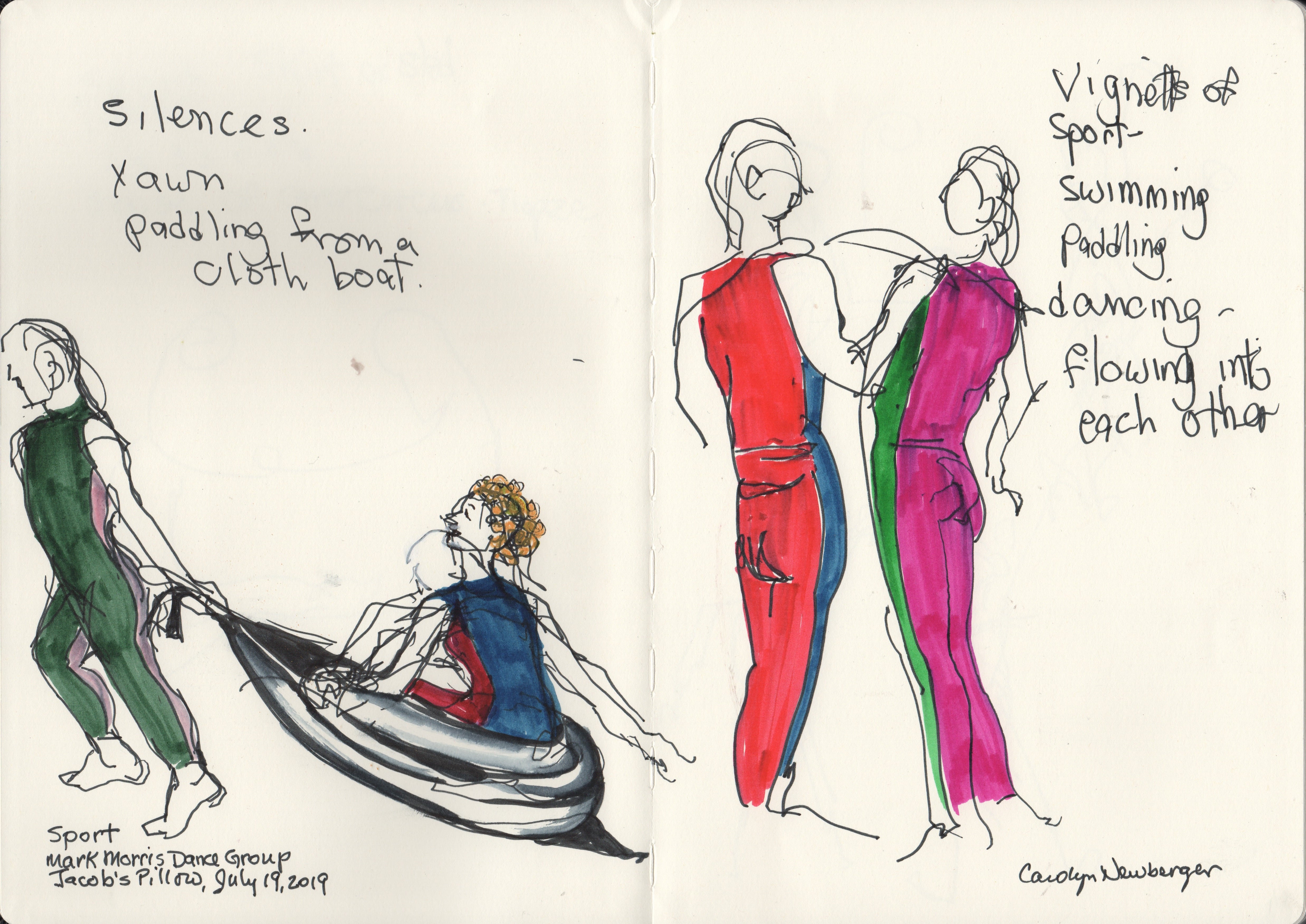 Imagine yourself standing inside a giant kaleidoscope, watching the pieces revolve around you, a sense of being inside an enchanted world immersing you in gorgeous, sparkling movement and sound. That was our feeling during a magical evening of the Mark Morris Dance Group at Jacob’s Pillow on July 19, 2019.

Greeting the audience, Pillow director Pamela Tatge noted proudly that Mark Morris Dance was by far its most frequently visiting troupe, and that she was especially proud of the Pillow’s formative role in shaping his choreography. The evening unfolded in short vignettes within larger pieces, set to music of Erik Satie, Henry Cowell, Felix Mendelssohn and Lou Harrison, serenely and passionately played by Colin Fowler, piano, and Georgy Valtchev, violin.

In dramatic contrast to the brilliant recapitulation of Merce Cunningham’s oeuvre by Compagnie CNDC-Angers/Robert Swinston of Angers, France, two weeks ago, here the music was not separate from but integrated with the dance—by intention, to great effect—as Tatge noted, “Mark Morris lives at the intersection of dance and music, like nobody else.”

“Sport,” set to Erik Satie’s “Sports et Divertissements,” was propelled with subtle humor by pianist Fowler. With dancers clad in bright jumpsuits with one color on the front and another on the back of the body (kudos to costume designer Elizabeth Kurtzman), the kaleidoscope whirled, skittered, swung and punched its way through a catalogue of sports, from baseball to boxing to lacrosse and, in the end, to the discipline and disappointments of bettering your golf swing fluidly, awkwardly, gracefully, violently and profanely. (To close the golf-practice vignette, one frustrated male dancer threw up his hands and cried, “Shit!”).

Water sports floated with glorious metaphors: kayakers and canoeists sweeping across the stage on dragged cloth boats; a sendup of synchronized swimming; the irrepressible Lauren Grant on her racing cloth skiff, head flung back, one arm in the air, the other trailing her fingers in the waters off—who knows?—St. Tropez?; and off to the races with horses cantering, high-stepping and galloping to a Lone Ranger’s worth of send-up by Erik Satie, of Rossini’s “Overture to William Tell.” Earlier, in a military march sequence, Satie even stuck in a brief quote of “The Marseillaise.”

When at the talkback after the performance, Morris replied “It isn’t a word thing, it’s a dance thing,” to a question about the meaning of gestures in the later dances (more about that in a moment), it’s still comforting to know absolutely (we think!) that those dancers who can do anything with their bodies are telling a story about playing golf and trolling in tropical waters on the Pillow stage!

“Prelude and Prelude,” with music for violin and piano by Henry Cowell, opened with a line of male and female dancers in black camisole leotards on the right of the stage. Apart, on the left, was a lone male dancer, also in camisole leotard, fan folded and held in his teeth, performing a kind of expressive counterpoint to the syncopated line on the other side of the stage.

In serried formation, the line of dancers moved bright blue fans in a comical ritual, over their crotches and chests, facial expressions serious as they examined their bodies intently, extended their arms outward, craned their necks and beckoned toward the heavens. As the dance itself unfolded, they opened, closed, extended and wrapped the fans around themselves like dance partners pivoting around the fixed point of the lead.

And then to something else entirely: “Song Without Words” romantic, lyrical, evocative Mendelssohn marching, spinning, waltzing the company from vignette to vignette, separated by a wordless silken banner, marched across the stage by an upright dancer at each end, sometimes with myriad feet behind it, marching along—to whom belong those feet without bodies? Where are they going so earnestly? Where are the words?

As Mark Morris suggests, that’s for us, the audience, to decide.

The program concluded with “Grand Duo,” set to “Grand Duo for Violin and Piano” by Lou Harrison. “Grand Duo,” Morris noted, is rooted in Jacob’s Pillow. He said that he actually “reverse choreographed” it during a fall residency (“you know, that scary time with all the animals!”) beginning with the fabulous “Polka” that closes the piece.

Here’s an exciting video of “Polka” that depicts the stunning synthesis of music and movement along with wry humor, with sidelong glances to Stravinsky and Diaghilev, maypoles and other rites of spring.

Note how the pianist’s syncopated keyboard slaps are echoed in the dancers’ own coordinated slapping gestures, which added an unexpected percussion part. One viewer commented: “That human beings can do these things is amazing.”

Where Harrison’s music is played as a duo, the dance is mostly larger ensemble with scattered solos and a deep sense of classical form: loosely draped tunics and flowing loincloths reminiscent of ancient Greece; solo muscularity reminiscent of Myron’s “The Discus Thrower”; and the energetic roundelay of mythic pagan ceremony. Embedded in this dance are mysterious, seemingly meaningful gestures, such as sequences where each dancer holds his or her two index fingers together and upright, above the head then in front of the body, then at the side.It was in reference to these stylized gestures that, in the talkback, a participant asked about their meaning. Mr. Morris, totally unaffected, charming, human and accessible, basically shrugged his shoulders and rejoined, “You tell me!”

That, dear reader, is the essence of Mark Morris’s art. It’s ineffable, most emphatically not based on formulas and established narrative tropes. Rather, its genius is its ability to draw us in—and to pull from us—our own sources of meaning, emotion, and delight.