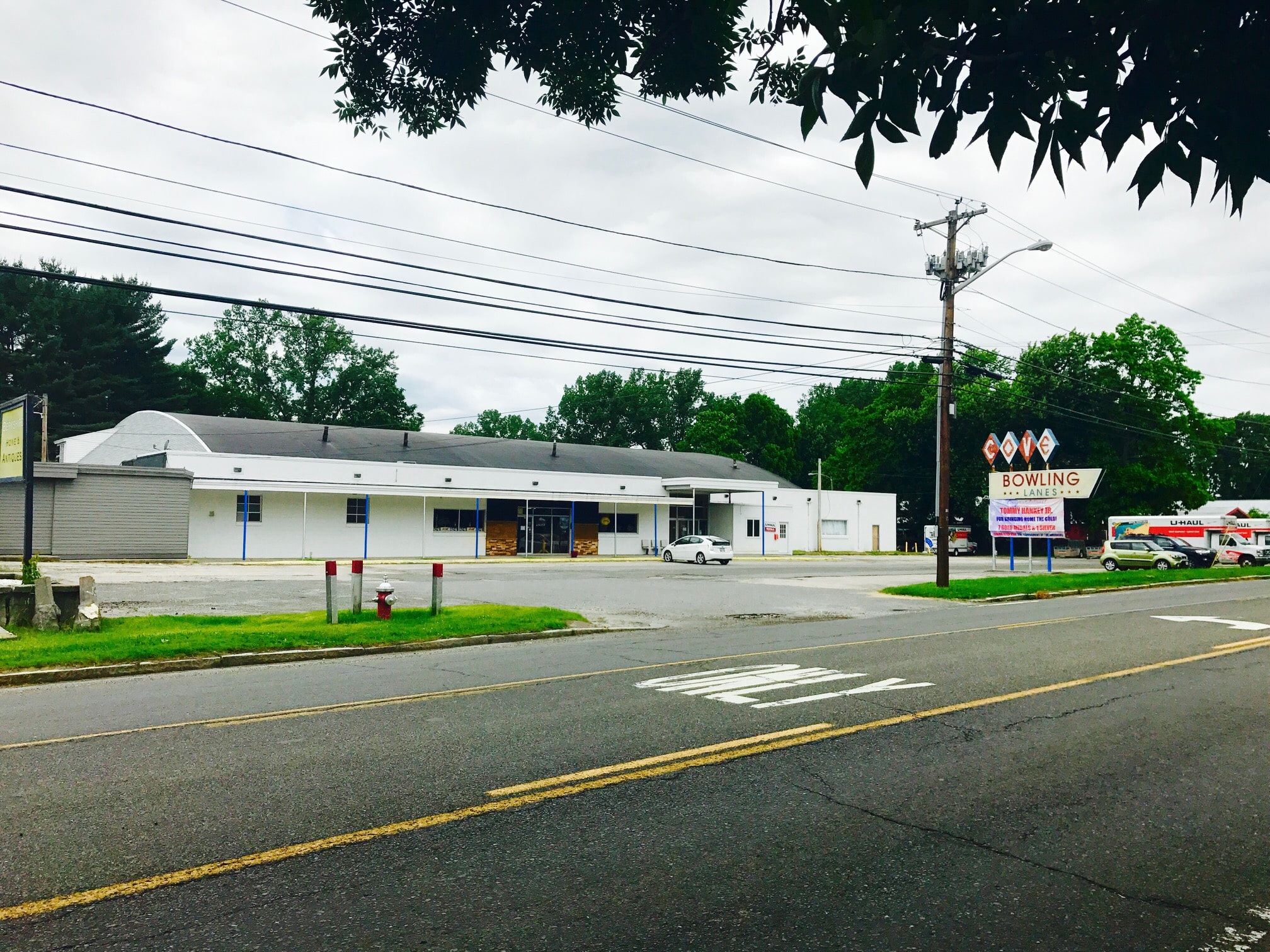 This is likely not a greeting real estate agents are accustomed to getting at 1:45 p.m. on a random Tuesday at the end of April. But that’s how Sotheby’s Maggie Merelle greeted the dozen or so folks who showed up at the Cove this past Tuesday for a tour of the property and a chance to both experience “Saturday Night Fever” in the middle of a cold, rainy weekday and win a DVD of “The Big Lebowski.” (Apparently I won.)

One Tuesday per month, local real estate agents gather for a tour of a local property for sale. Tuesday, April 30, the hosts were Merelle and Steven Weisz of William Pitt Sotheby’s, and the gathering place was local institution the Cove Bowling Lanes, which has been on the market for coming up on two years. The original asking price of $4.5 million has been gradually reduced to its current price of $2,995,000.

As for interested buyers for the 25,000-square-foot property that is set on 4 acres of land with 109 parking spaces, there here have been, on average, one or two showings per month, according to Weisz. Most of the would-be buyers have been from out of town. “People have come in with a group of investors. Bowling alleys are difficult to monetize. It’s the acreage, the building, how much money comes in, what the potential is. Which is where the Cove outshines. The location is terrific—right on Route 7. When we took on this listing, we did an exhaustive search on bowling alleys to get to know the challenges of what we’re selling. Because this place is set back from Route 7, there are possibilities for augmentation of the space … there’s the possibility of putting in live music here and a full-sized restaurant, and there’s another 15 feet to build out toward the road. You’d have to have a sense of adventure and imagination.”

As we chatted, two of the 24 lanes were occupied, with the real estate crew taking up another two. Daytime fluorescents were replaced with a full disco effect, and two screens descended, showing 1970s-era videos of the Bee Gees and Jackson 5. Great Barrington Selectboard member Ed Abrahams, who’s interested in seeing the business endure, suggested line dancing along the lanes.

“People say, ‘Oh, bowling alleys are closing up all over the place.’ But we looked at those that are successful, like Lucky Strike in Albany and BowlMor Lanes in Times Square. What made them successful? They changed the formula. They added restaurants, cocktail lounges, live music. They’ve changed the business model. We’re trying to get people to understand that there are different ways to make it work,” Merrelle said.

And, of course, as Weisz added, “There is that rumor.” The rumor he’s referring to is the one that claims the Cove as the inspiration for the bowling alley that was a central setting in the Coen Brothers’ 1998 cult classic film “The Big Lebowski” starring Jeff Bridges, John Goodman, Julianne Moore and Steve Buscemi, among others. The brothers attended Simon’s Rock in the late 1970s and observers have made note of the similarities between the Cove and the lane portrayed in the film version, set at the Hollywood Star Lanes as well as the overall 1970s vibe, right down to the sweater worn by “the Dude,” Jeff Bridges’ character.

Though the rumor has had legs enough to have been picked up last year by the Daily Mail in the United Kingdom, it has yet to be confirmed from the horses’ mouths.

Lamented Weisz, “We’ve been trying to get in touch with the Coen brothers, but no one’s answering the phone.”

In addition to the lanes, the Cove has a large bar and trophy room, snack bar, an arcade, and a miniature golf room, now looking a little worse for wear. In there, Weisz waxes enthusiastic, seeing “the next Helsinki.” Merelle suggested “virtual golf, batting cages.”

Owner Tom Hankey bought the Cove from Gordon McIntyre in May 2008 and said the business has been consistently profitable. “I’ve really enjoyed it. It’s been great. I just feel like it’s time. I’ve been here 20 years.” Hankey grew up on Anderson Street in Great Barrington, across from the courthouse. “I grew up in this place, my parents bowled two or three nights a week. I bowled in the youth league on Saturday mornings. It’s come full circle. My son did the same thing. He’s off to college now.”

Dad was being a tad modest there. Tom Hankey Jr. was recruited for the school’s bowling team and just won the Intercollegiate Singles Championships held April 20. Hankey Sr. was planning to watch his son on CBS Sports live on Tuesday night.

These days the lanes are busy five nights out of seven with league play, along with youth leagues on the weekend and, as this parent of young children can attest, the Cove has long been, on any given rainy or snowy afternoon, a godsend. (The day after Thanksgiving, from about 1975–85, my uncle would bring me, my sister and five cousins to the Cove for an epic tournament followed, always, by ice cream at Friendly’s, on the current site of the Marketplace Cafe.)

Abrahams said of the Cove: “I really want to make sure this stays a bowling alley.” Upcoming zoning changes may be an issue, though, to be decided at the Monday, May 6, town meeting. “This whole stretch is being rezoned. There’s three different zoning proposals. The third one is about Stockbridge Road, to encourage, or allow, apartment buildings closer to the road. So that’s almost going counter to encouraging it to stay as a bowling alley. On the other hand, the only thing worse than losing the bowling alley would be an empty space. My first choice is a bowling alley; second choice is, anything else.” By the end of the realtors’ hour at the Cove, Sotheby’s Ethan Watt was the high scorer (“Pure luck,” he insisted.)

Said Weisz: “The bottom line is we want this place to survive. This is the type of thing where, if we just let it be, eventually it’s going to be turn into an empty building, and then it gets torn down and people say, ‘I really miss that Cove.”