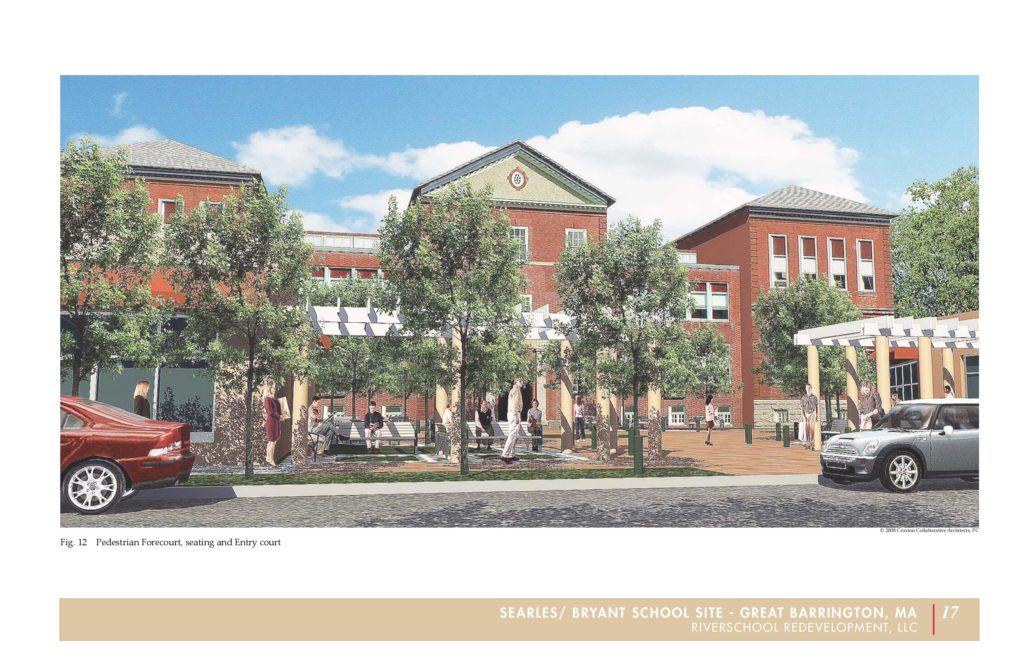 An illustration prepared in 2010 for Riverschool LLC portraying the envisioned conversion of the the former Searles School complex into a retail and commercial center.

The commercial center of downtown Great Barrington could very well be about to expand — to the east.

The former Searles Middle School complex on Bridge Street is finally off the town’s hands and into those of Iredale Mineral Cosmetics, LTD, said Town Manager Jennifer Tabakin at Tuesday’s (October 14) Selectboard Meeting.

And Iredale Executive Vice President and CFO Robert Montgomery said the company plans to sell Searles, and was currently in “discussions with two very interested parties,” though he did not want to provide detailed comment.

“We want to insure that whatever is done [at Searles] is complementary to what we’ve done in the area,” Montgomery said. This reasoning, he added, stretched down Bridge Street to the former Log Homes site, where a major bioremediation project is making way for a redevelopment that will likely include an expanded Co-Op Market. “It would be very nice,” Montgomery said, to have “another avenue of commerce along Bridge Street.” 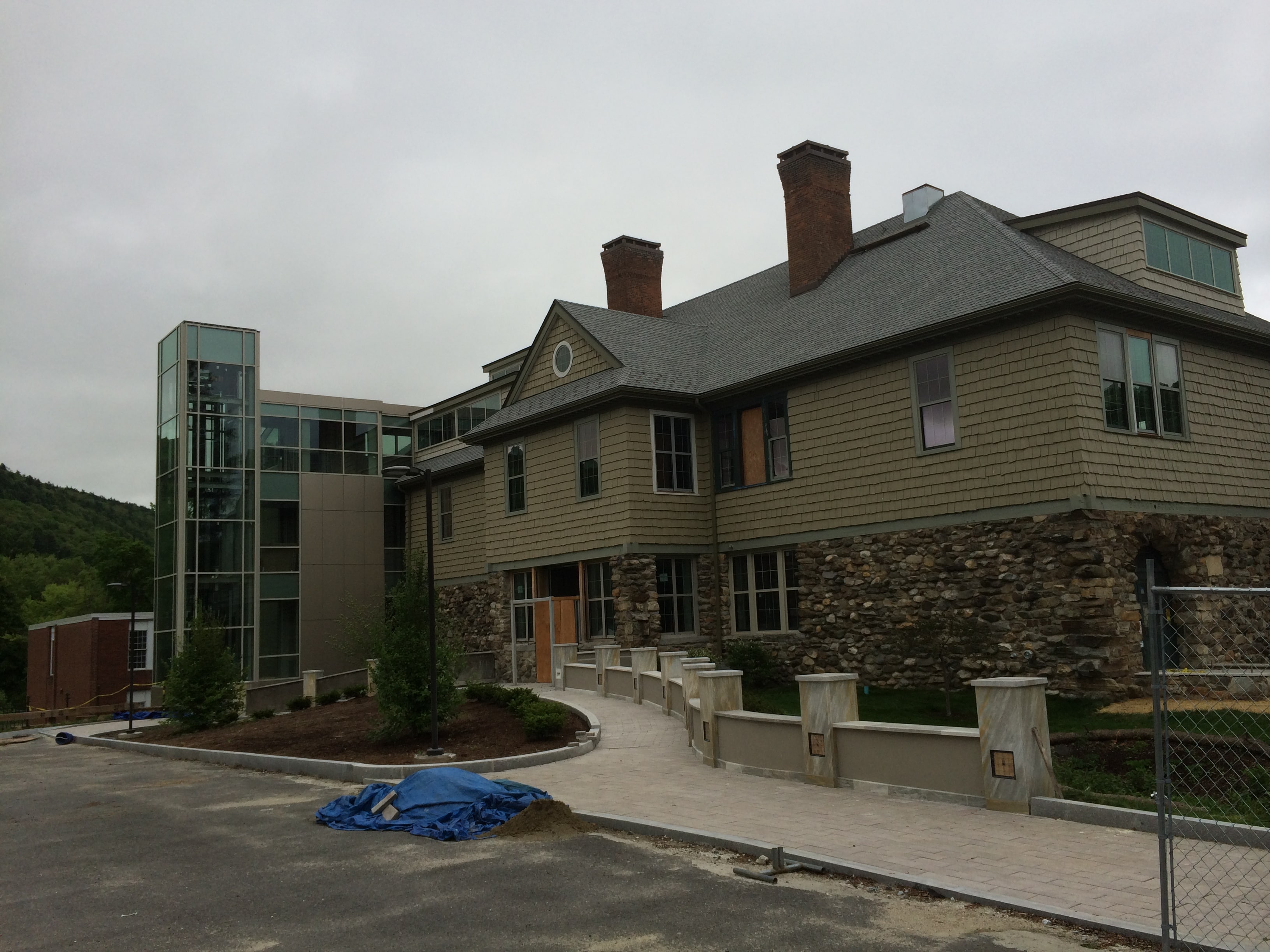 The rebuilding of the Bryant School into Iredale Mineral Cosmetics headquarters is still underway.

Iredale owns and has nearly finished renovating the former Bryant Elementary School for its world headquarters that is adjacent to the Searles complex. The town had issued a $640,000 promissory note to the company after Iredale’s partner, RiverSchool, LLC and developer Canus Corporation, backed out and failed to make payment on the note by May 1, 2014. The note was paid in full last Friday by Iredale, Tabakin told the Selectboard. The mineral cosmetics giant now owns 90 percent of the building; Community Development Corporation of South Berkshire (CDC) owns the remaining 10 percent. The note included $15,995 for a final environmental remediation on the property, which is the town’s responsibility, Tabakin said.

Tabakin and the Selectboard appeared relieved.

“We got the money,” said a smiling Tabakin when asked if the matter was completely settled. A round of laughter followed her comment. 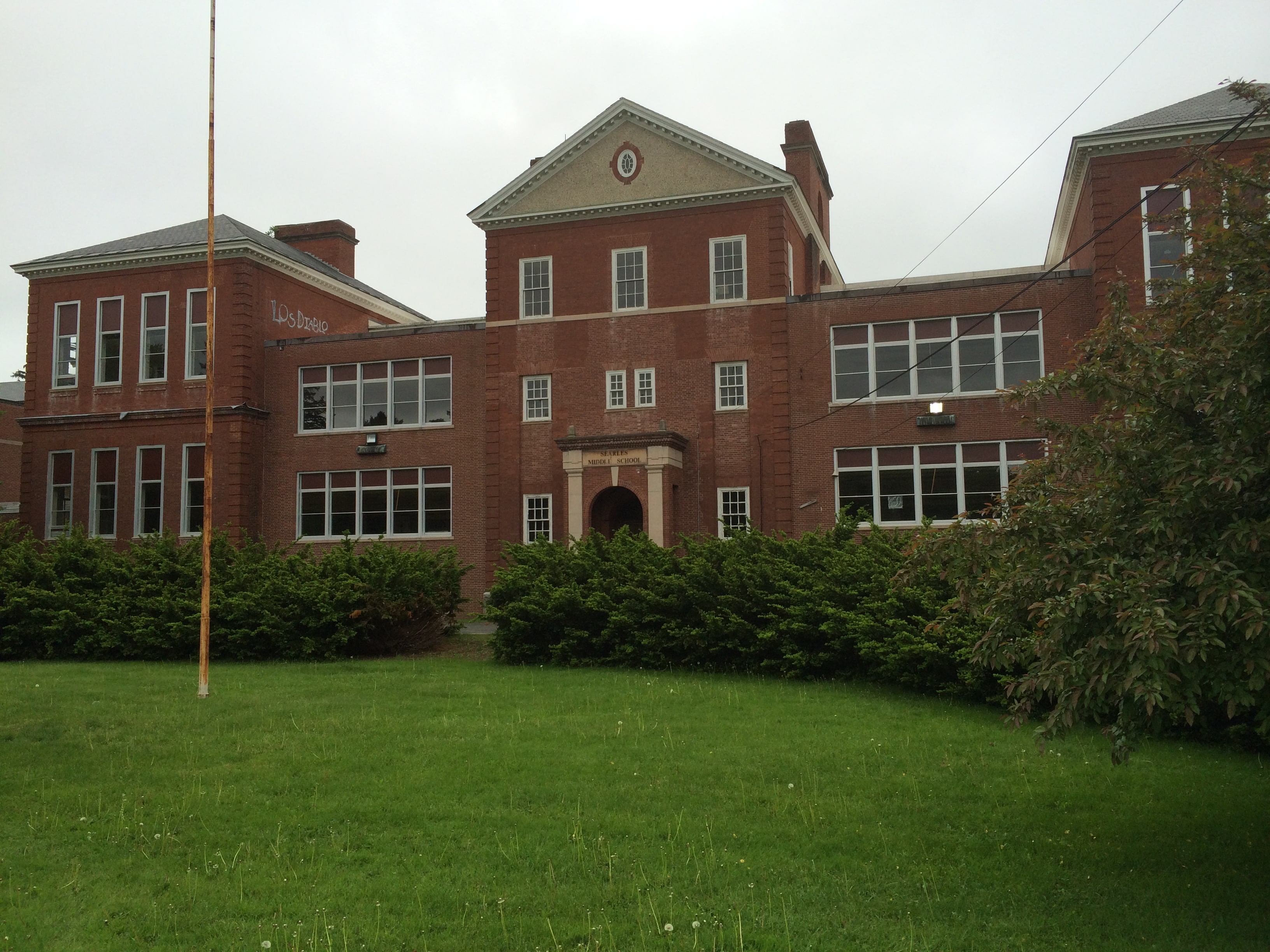 The former Searles School as it appears today, from Bridge Street.

The school complex had been empty after the school district moved students into two new schools in 2005 at its new campus near Monument Mountain High School. After controversial rounds of failed proposals by others, Iredale partnered with RiverSchool, LLC to develop the complex. The partnership wooed the town with its tantalizing plans to transform the former school complex into a $19 millon residential, commercial and retail complex.

Some of that has already happened. The new Iredale headquarters is almost complete, with a Certificate of Occupancy slated for mid-November, Montgomery said. “We’ll be moving in immediately thereafter,” he added. “It’s been a long project but we can’t wait to be in.” He said the company has had “people scattered all over the place. This will allow a good part of us to get under one roof.” 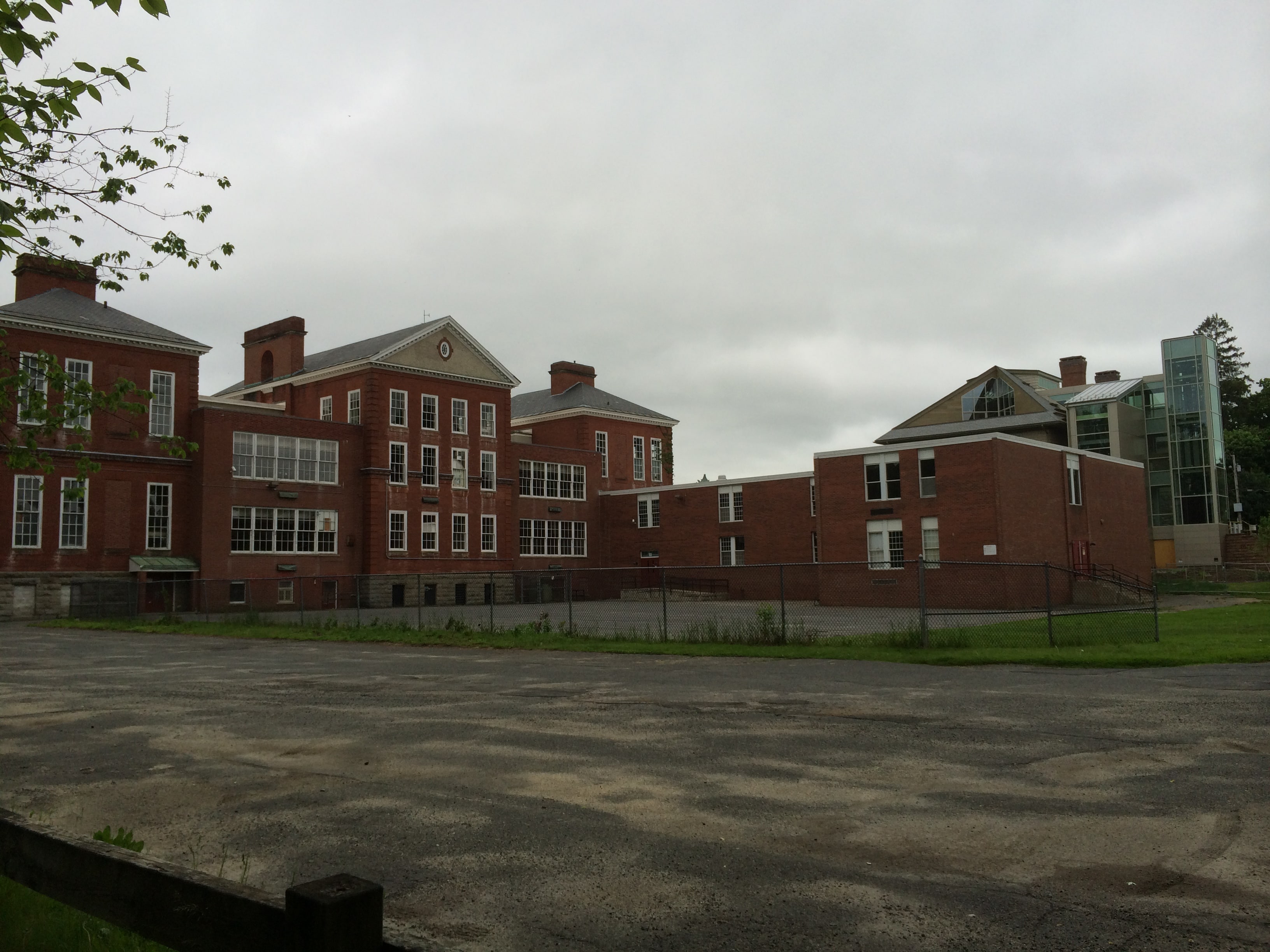 The back of the Searles School complex, with the Bryant School at right.

The Bryant School renovation has not only been long, but the company has had to jump through many a compliance code hoop to the tune of many a dollar. There are seismic regulations, Montgomery said, that he “personally” felt would “render a lot of old properties in Massachusetts basically obsolete for redevelopment,” due to the expense.

There was also a good dose of environmental hassle, some of which was the town’s responsibility. Specifically, an old underground storage tank that had developed “large plumes to sit there and spread,” he said. “To clean these up was more expensive than if it had been done properly,” when the tank was removed around 20 years ago. “The property was purchased subject to [the town] picking up the cost of any subsurface remediation,” Montgomery added. The Massachusetts Department of Environmental Protection stepped in and required three years of well monitoring, now complete.

“As it turned out the design of our building was such that we were putting in a lot of infrastructure right where the oil plume had existed,” Montgomery said. Rather than “let it run it’s course,”— the cheaper option — “we ended up carting a lot of soil away so we would never have any future issues with it, like having to “dig up the front entrance” if MassDEP found high levels of oil.

The company knew, Montgomery said, that all the asbestos had to be removed. “That was done on our nickel in both buildings.” 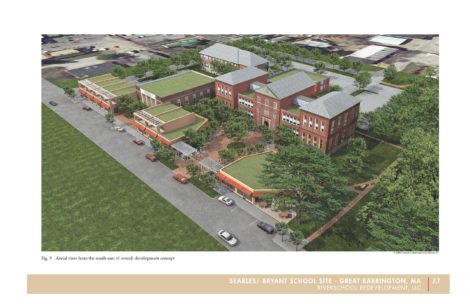 This illustration shows the redevelopment of the Searles and Bryant School complex as originally proposed by RiverSchool Development on Bridge Street in Great Barrington.

While the CDC owns 10 percent and has an option on the annex building, said Executive Director Timothy Geller, it has no voting rights. The original plan, Geller said, was to build 10 or 11 affordable housing units there, but now the plan is evolving. “We’ll have to see what the overall development plan is for the site, and how the original plan fits into that,” he said. “CDC will develop those units if it makes sense in the context of the entire project. That is yet to be determined.”

According to Montgomery, we’ll all know something about it relatively soon.

“It is possible that within a month’s time or a little longer — by the end of the year — there will be a lot more definition around that vague picture of where we are today,” he said. “It’s a grand building, and it ought to be renovated correctly,” Montgomery said. But Montgomery is not naive, having been through the renovation wars, and added that bringing old buildings up to code is complicated and expensive.

— Albert Einstein
Read next: What I really said -- and why I now support the Monument renovation