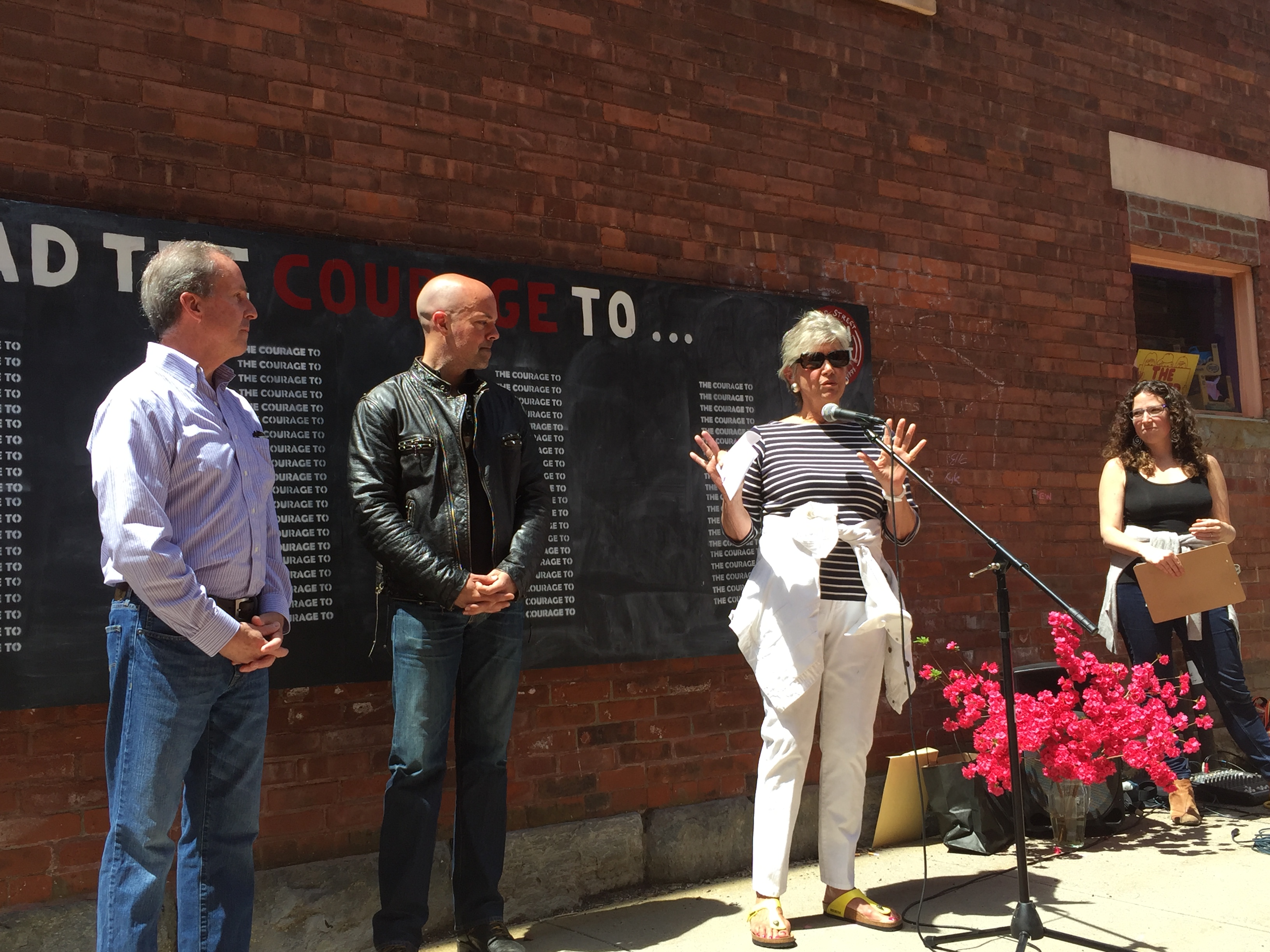 Great Barrington — Passersby took pause, kids parked their bikes and the general din of the holiday weekend was suspended momentarily on Saturday afternoon as a crowd of more than 70 community members filled the alleyway between Railroad Street and the Triplex Theater to celebrate young people and their courage. This event, in conjunction with the inauguration of the Courage Wall, served to kick-off Railroad Street Youth Project’s (RSYP) 3rd Annual Generation Block Party that included an awards ceremony, food, live music and games.

RSYP Executive Director Ananda Timpane welcomed the crowd — beneath a sliver of blue sky visible between facing brick facades — under the auspices of celebrating the “courageous things youth do every day.” Timpane went on to say, “It takes a lot of courage to be a young person today. They are growing up in a time when young people are faced daily with uncertainty in an economically, environmentally and politically precarious world.” For those unfamiliar with the work of RSYP, Timpane summed it up beautifully: “[our work represents] true intergenerational leadership and commitment to our community,” she said.

RSYP Mentoring Coordinator, Sabrina Allard, talked about the influential nature of this work. In her remarks, Allard spoke again and again about the importance of today’s youth being, “seen for who they are and all the amazing talents they bring” to the proverbial table. She went on to say, “not every day is easy–everyone goes through bumps,” noting the particular strength and courage it takes to be a middle schooler in this day and age. In this vein, she spoke about the importance of simply showing up.

State Rep. William “Smitty” Pignatelli was introduced by Timpane as someone who is, “always showing up to shout out our young people.” She went on to call Pignatelli a veritable “backbone for RSYP.” The ever-gracious Pignatelli was joined by his colleague, state Sen. Adam Hinds, whose attire suggested he had driven south to the event via motorcycle. After some light-hearted ribbing, Pignatelli noted the importance of collaboration in bringing important work to fruition, calling Hinds his “partner in the Senate for the past five months.” Pignatelli went on to admit, “I fell in love with RSYP about 15 years ago; I saw the opportunity to continue the good work that began in Great Barrington” noting that the creation of the Berkshire Youth Development Program this is happening. Of this important work Pignatelli said, “[it] lets adults step aside…and embrace the ideas of the youth.”

“I had a feeling this might resonate with the youth,” said author and Housatonic resident Barbara Bonner, of her idea to collaborate with the Railroad Street Youth Project in bringing a Courage Wall to Great Barrington. Bonner, while doing research for her second book, Inspiring Courage (published last month by Wisdom Publications), came across a community project in Alexandria, Virginia. There, on Mount Vernon Avenue, an 8 foot by 20 foot chalkboard was erected with a prompt at the top: “I wish I had the courage to…” The prompt encouraged passersby to consider their fears, and what it takes to overcome these fears. In her book, Bonner has compiled quotations, poems, and stories of those often overlooked moments of courage in daily life: what they really mean, how they manifest in people’s lives, where they come from, and how they can be cultivated.

“I discovered the history of the original Courage Wall and then brought the idea to Ananda and the Youth Operational Board because I believed it would resonate with RSYP’s mission and community,” says Bonner. She went on to advise those poised with chalk in hand: “Don’t overthink it…[courage] pours forth from inside. You are enough.” It was Timpane who ultimately invited the crowd to, “make our community’s courage a little more visible by writing on our wall” which was facilitated by the passing out of brightly colored sticks of chalk. “The Courage Wall has the capacity to support young people in South County to feel empowered and valued, and envision a hopeful future for themselves,” she added.

It did not go unnoticed that the theme of the day was visibility; the Courage Wall, a literal manifestation of this visibility, will remain in the alley through the fall. Its foundation in impermanence, however, must not be overlooked. The fact that no message scrawled there can be indelible in the physical form, considering the propensity of nature or human hands to erase it, puts courage into further perspective: to be courageous is not to be seen; it is to act. When a true ripple effect is set into motion by doing, the effects can’t help but be far reaching. Everyone, including school groups and community organizations, is invited to visit the Courage Wall and share their thoughts and inspiration. For more information on the Railroad Street Youth Project, visit www.rsyp.org.