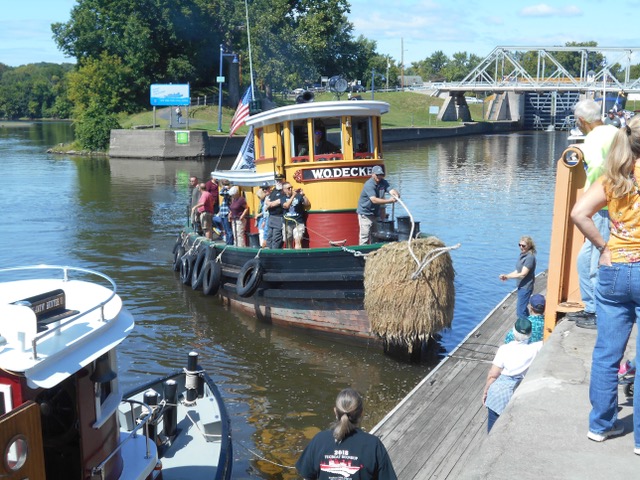 The Russell I, rechristened the W.O. Decker, pulls dockside at the annual Tugboat Roundup last autumn in Waterford, N.Y. Photo: Bernard A. Drew

It’s a steady 4 knots per hour as Capt. Maura Hackett navigates the 1930 tugboat W.O. Decker on the Hudson River, making a loop south from Waterford, New York. Originally a coal-fired steamer built for yard duty, the vessel is now powered by a 300-horsepower General Motors 610 diesel engine. In the fleet of South Street Seaport Museum, it recently underwent a $750,000 restoration.

Donna and I attended the 20th Tugboat Roundup at Waterford at the juncture of the Hudson and Mohawk rivers and the Erie Canal/New York Barge Canal in September. There was a good crowd for the dockside demonstrations, vendor booths, food tents and historical and conservation displays. One highlight was a tour of the famed Manhattan fireboat John J. Harvey, which came out of retirement and, for 80 hours with volunteer labor, supplied water at the 9/11 site in 2001. At regular intervals, the crew impressed onlookers by firing off several of the water cannons.

The other highlight was a ride on the Decker. The tug was built at the Long Island Machine and Marine Company at Hunter’s Point. It was the company’s last ship of 11 to come from the yard. It was originally called the Russell No. 1, and assigned to shore work.

The Russells, who owned Newtown Creek Towing and other concerns, were contemporaries of the Morans and the McAllisters, all vying for tow work.

Convenient to my learning more about the water workhorse is a new book, “Tugboats and Shipyards: The Russells of New York Harbor, 1844-1962” by Hilary Russell Jr. of Sheffield. The book has 140 photographs (many from the George Munson collection), illustrations and maps.

Hilary Russell, who taught at Berkshire School in Sheffield for many years, directs the Berkshire Boat Building School and teaches at WoodenBoat School in Brooklin, Maine; Yestermorrow Design/Build School in Waitsfield, Vermont; the Riverport Wooden Boat School in Kingston, New York; and at his shop in Sheffield. He has written for WoodenBoat magazine, Messing About in Boats and Adirondack Life and is the author of an earlier book, “Building Skin-on-Frame Double Paddle Canoes.”

Although he never trod the decks as a tugboat hand, he has plenty of background as a Russell. His great-grandfather, Arthur A.E. Russell, a native of Liverpool, England, began a lighterage firm sailing loose-footed, gaff-rigged sloops in New York Harbor and beyond, capitalizing on the Pennsylvania oil that came into Port Elizabeth, New Jersey. The ships met arriving cargo vessels and “lightened” them of their loads, shuttling cargo to appointed destinations.

“The second generation established the Newtown Creek Towing Co.,” he explained, “and began at Hunters Point at the mouth of the Creek, that already-busy tributary separating Brooklyn and Queens. Becoming better known in the next generation as Russell Brothers Towing, they expanded south to Virginia, downeast to Maine, up the Hudson River, through the canals and into the Great Lakes.”

That was one aspect of the family business. Another was building steam engines and patenting engine parts at a foundry and machine shop, Long Island Marine and Machine in Hunters Point. “They pioneered the short, oval wedge stack, stern notch barges and the use of diesel engines in place of steam,” he says.

The Russells owned three yards located on Newtown Creek, at the mouth of Bushwick Creek in Greenpoint, Brooklyn, and at the Erie Basin. “They built tugs of all kinds, then-innovative notch-stern barges, trawlers, ferries, subchasers for the U. S. Navy and Coast Guard, fireboats, coast-wise freighters, and an experimental liquid container ship for the U.S. Army,” according to the author. “Today their most famous tug is the W.O. Decker, docked at the South Street Seaport Museum in New York City. Originally the Russell 1, the vessel — built in 1930 at the Russell yard on Newtown Creek — is the last wooden-hull tug built in New York Harbor.”

Russell weaves the tugboat history into a telling of his personal quest to learn more about his family; collecting accounts of storms, accidents and other details of daily life on tugboats in the 1930s through 1950s from tugboat captains; and revealing more about the lives of family women and country life at the family farm in Mount Kisco.

“As the postwar building boom slowed,” the author said, “Russell Brothers relied heavily on towing oil barges. When there was a glut of oil in the early 1960s, Russell’s work slowed dramatically. Ironically, oil, which helped Arthur Russell establish his successful lighterage business, turned out to be the straw that broke the company’s back.”

The Russells, having themselves absorbed White Star Towing, Harlem River Towboat and Flannery Towing, sold the umbrella Russell Brothers Towing and Newtown Creek Towing to McAllister Towing in 1962, ending the family’s uninterrupted 118 years on the water.

(South Berkshire trivia: McAllister Park on Haley Road in Great Barrington was the gift to the town’s in 1971 by Gerard and Jane McAllister in 1971. McAllister was a third-generation member of the towing McAllisters.)

Hilary Russell Jr.’s book is great fun and recommended, whether you’re interested in the lure and lore of tugboats, in the workings of earlier-day shipyards or family enterprise.

Edited by Jane Crosen and designed by Kim Bradway, the 158-page book is available locally at the Bookstore in Lenox, Shaker Barn Books in West Stockbridge and the Bookloft in Great Barrington — also at Oblong Books in Millerton, New York; the South Street Seaport in New York City; and the Hudson River Maritime Museum in Kingston, New York.