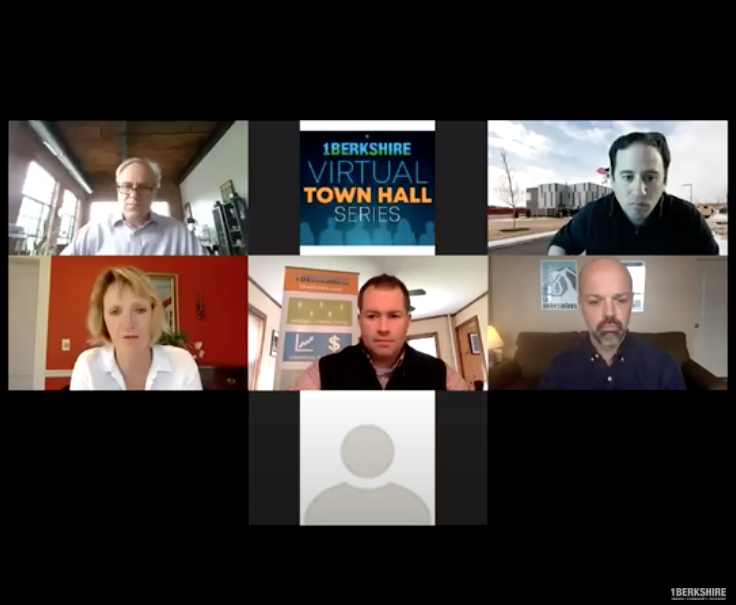 Pittsfield — Reopening the Berkshires after the COVID-19 pandemic should be done carefully but could spawn a reimagining of the region’s economy, a panel of public officials and business leaders concluded on Friday morning.

1Berkshire, an economic development group based in Pittsfield, held one of several “virtual town halls” via Zoom, this one on “Reopening the Berkshire Economy.”

See video below of the 1Berkshire virtual town hall on reopening the Berkshire economy:

Hinds set the tone with a few grim statistics. On Friday morning, news broke that retail sales in the U.S. had dropped 16.4 percent, by far the steepest monthly drop on record. This was on top of an 8.3 percent loss during the preceding month. However, online sales rose significantly but still not enough to make up for the declines elsewhere.

“We all woke up to some concerning news,” Hinds said. “We now have nearly 1 million jobless claims in Massachusetts in the last eight weeks. There are 7 million people in Massachusetts.”

Hinds said the new national numbers likely provide regional context to the plans, announced Monday by Gov. Charlie Baker, for the beginning of a four-phase plan to reopen the state’s economy.

Hinds also noted a recent report from UBS that 100,000 more brick-and-mortar retailers are expected to close by 2025. Even during the great recession of 2009, only 20,000 retail stores were closed. Berkshire County’s unemployment rate is 27.8 percent, Hinds said.

“So we’re in the middle of a major shift in our economy, a redistribution of our economy in many ways,” added Hinds, a legislative observer on Baker’s reopening advisory board. In the last two weeks, he has sat in on more than 80 sessions that included discussions on different sectors of the economy.

Hoch noted the fiscal challenges all municipalities will be facing as they’re confronted with diminished revenues from the state and severe shortfalls in local-option sales tax revenues on meals and rooms. He projected a “precipitous drop” of 25 percent in non-property-tax revenues in Williamstown. He said the town is looking at more outdoor dining, with the possibility of even closing some streets, in order to help Williamstown’s vibrant restaurant sector get on its feet.

Hinds said Berkshire County might see a more aggressive reopening schedule than other portions of the state because of the county’s sparsely populated rural landscape. Both Butler and Hinds cautioned, however, that such decisions will be driven by balancing the economy with concerns about public health. Hoch noted that social pressures can prompt people to comply with directives.

“If you’ve been spotted in Williamstown not wearing a mask, I and my staff have probably been notified,” Hoch said. “Sitting in local government, we’re the vehicle for both sets of people to express their excitement and anger at the same time. Our job is to navigate those two successfully.”

Three days after the 1Berkshire virtual town hall, Baker released additional details of his plan to reopen the state. Phase 1 of the reopening begins Monday, May 18, for some businesses. At that time, the construction and manufacturing industries as well as houses of worship will be allowed to resume operations.

Sosne’s Berkshire Innovation Center, which assists small to medium-sized manufacturing companies, had its grand opening on Feb. 28. Baker himself attended.

“We had 400 people packed into the innovation center,” Sosne said. “It’s a jarring contrast to what we’re doing now.”

Sosne explained that the hardest-hit industries have been leisure and hospitality. Manufacturing, he said, is in a comparatively stronger position. A lot of manufacturers, Sosne said, “see some opportunities.” In addition, “there may be some onshoring” of manufacturing jobs after the pandemic recedes.

“We’re seeing what kind of opportunities there are for the Berkshires and this sector,” Sosne said. “This has been devastating locally, but how can we work together to rebound it?”

Trainer was the representative from the culture and tourism sectors. She said her organization, Hancock Shaker Village, is “feeling stunned by the loss of our performing arts colleagues.”

News of the cancellation of the Boston Symphony Orchestra’s summer season at Tanglewood broke shortly after the virtual town hall ended on Friday, but season cancellations had been announced earlier from Jacob’s Pillow, Shakespeare & Company, and others.

Trainer said Hancock Shaker Village, which laid off 10 employees at the end of March, is looking at ways to strengthen its position as an outdoor destination.

“How can we reformulate what we’ve always done in a way that works in this new world and safely?” Trainer asked. “One example is our baby animals. A lot of culturals are trying to find creative ways to still program … We have the benefit of a lot of wide-open space.”

Sosne predicted changes to the workplace, in part because companies that were skeptical of allowing employees to work remotely “now realize it works.” Of the influx of people from the Boston and New York area to the Berkshires, Sosne added: “After 9/11, people moved here because they wanted to get out of high-density urban environments. There is an opportunity for the Berkshires to grow in that sense. We need to be supportive of people who want to do that. It would be a wise move for us.”

“We’re nimble by nature,” Trainer added. “As more people work remotely, there is an opportunity for us to retool ourselves. It’s not easy. It’s painful right now. But I’d rather live here than anywhere else.”

“We might be stronger after this,” said Hinds. “It speaks to a need to get these fundamentals right. We as a region are as well-placed to come out stronger than any other region.”

As Hoch’s audio cut out and his video became choppy, Butler said he was reminded of a perennial problem in Berkshire County: the lack of reliable high-speed broadband connectivity.