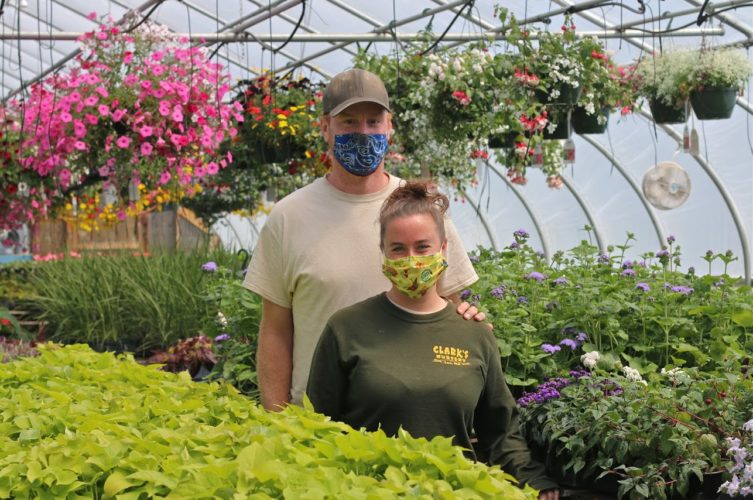 Dan Sumner, left, and Brittany Sumner, co-owners of Clark’s Nursery in Lee, say that the nursery is busier than it's ever been. Photo: Emily Thurlow

Berkshire County — COVID-19 has sprouted much uncertainty for businesses and consumers alike. Between preventive advisories designed to stop the spread of the novel coronavirus and closure of schools, town offices and businesses, Brittany Sumner wasn’t sure her family-run shop would even be able to open its doors.

But after being designated an essential business, the Lee-based Clark’s Nursery was not only granted access to open its doors, it has also become one of the more popular places people are turning to for both sustenance and entertainment while adhering to stay-at-home advisories. In fact, this year’s opening has yielded a crop of consumers like Clark’s has never seen before said Sumner, who co-owns the business with husband Dan and parents Tina and Rodney Clark.

“We’re close to double our normal sales,” said Sumner. “The Berkshires tend to be an area that’s big in gardening, but with the majority of people being forced to work from home or carry out downtime from home as vacations are canceled, people are paying more attention to their outdoor landscapes.”

What’s more is that there doesn’t seem to be a difference between Monday sales and weekend sales. “There’s no such thing as a weekend anymore,” said Sumner, laughing.

People are flocking to the business every single day and downtime is at an all-time low. Initially consumers were purchasing a lot of perennials, premade combination planters and hanging baskets as well as plants that attract hummingbirds and pollinators, said Sumner.

Hanging baskets have been so popular that in addition to the 1,300 plants that were grown in-house, the company has had to order from another grower, and received its first-ever truck shipment filled entirely with hanging plants. Organic soil is also one of the top-selling products.

Clark’s Nursery was founded more than three decades ago and has been housed at three different locations, having moved each time it outgrew its space. Sumner began helping out her parents at the business when she was in grade school. The school bus would drop her off at the nursery and her job was to deadhead, or pinch off, spent blooms of fuchsias for 1 penny a plant.

These days, Brittany Sumner can be found at the nursery for 12 hours each day alongside her husband, her parents, a part-time employee and, sporadically, her niece and nephew. Throughout the day, she can be seen running back and forth, aiding customers on decision-making, tending to plants and helping at the cash register beside her mother, who has lupus, an autoimmune disease that can cause inflammation throughout the body, including the skin. In between, she runs into the office to attend Zoom meetings as a board-certified behavior analyst for Berkshire Hills Regional School District.

“If it wasn’t for delivery pizza, I don’t think we’d eat at all,” said Brittany Sumner.

Clark’s isn’t the only Berkshire-based garden and horticultural business that’s blossoming in the era of COVID-19. Ward’s Nursery & Garden Center has hired more staff and is looking to hire more to accommodate the growing demand, according to Jodi Cahillane, advertising and marketing coordinator for the Great Barrington-based business. The company first opened in 1957.

Although some members of the staff have cut back on their time out of precaution, Ward’s still has roughly 30 full- and part-time employees. Similar to Clark’s, many customers are buying more perennials at Ward’s, but they’re also buying up a lot of fruit trees. Before May 1, the company had sold 600 to 800 fruit trees according to Sam Fennell-Ward, nursery manager at Ward’s.

Even with a delayed opening, Windy Hill Farm in Great Barrington is also seeing sales numbers that it’s never seen before said Dennis Mareb, owner of the business that was established in 1980. Windy Hill has also had to hire additional help to meet demands, and it has a total of around 30 full- and part-time employees.

Mareb said the company was nearly sold out of all of the seeds it offers as of last week. Sales of fruit trees and fruit bushes are also on the rise.

“It’s one of the most, if not the most, challenging years we’ve ever had,” he said. “This was a year we couldn’t really prepare for.”

“Business as usual” does not exist for any industry at this point. With that said, county horticultural businesses have taken steps to keep both staff and consumers safe while still adapting to increased demands. Windy Hill Farm delayed its opening to establish protocols as recommended by the Massachusetts Nursery and Landscape Association.

Upon entry into the greenhouses at Clark’s, staff sprays the hands of each person with sanitizer. Brittany Sumner said that people have been understanding and flexible. The business has also changed the packaging on as many of its planters as possible and used more 6-inch round pots in an effort to limit touching. Clark’s has also moved rows of plants outside to help with those nervous about being in tight quarters with others, she said.

Ward’s has instituted curbside and delivery preorders, said Cahillane. The service has been especially popular and foot traffic for this time of year actually seemed down, she added. The service has been so popular that staff has been unable to keep up with its orders and was currently unable to fill new ones until May 29. Deliveries have been scheduled one to two weeks into the future.

Much like other businesses, Ward’s has also set up lines to keep people 6 feet apart. Cahillane said that staff has also tried to use communication typically associated with restaurants, like “behind you,” to keep people 6 feet apart. And what locals are seeing in the Berkshires is exactly what is happening all over the country and the world, according to Dave Whittinger, executive director of the National Gardening Association.

Each year, the association conducts annual research every January and each annual report covers the previous year. In 2019, 74% of U.S. households participated in at least one lawn or garden activity. Breaking down the numbers a little, 27.9% of American households, which Whittinger said equates to 35.8 million, participated in flower gardening, and 24.8% in vegetable gardening. Anecdotally, Whittinger said that the 2020 numbers will probably be double that.

Consumer horticulture contributes $346 billion to the U.S. economy and creates more than 2 million jobs, according to the MNLA.

In the Berkshires, there are many people who have started digging in the dirt for the first time ever, for both sustenance and entertainment. Many are growing vegetables for the “food security” aspect, others for the health aspect, and many just for the sheer enjoyment of the hobby, said Whittinger.

“There don’t seem to be specific crops flying off the shelves,” he said. “From what I’ve heard, it’s across the board all types of plants are being purchased. Vegetables, of course, are a huge area of interest this year, though, for obvious reasons.”

Moving forward, it’s hard to anticipate what the future will bring. Dan Sumner said he isn’t sure that the business will sustain its increase in sales throughout the rest of the season.

Beyond the months of May and June, Windy Hill has to prepare for pick-your-own apple season in August and pick-your-own blueberries in the fall. Changes to those traditional activities are to come, but meanwhile, Mareb said he and his wife, Judy Mareb, feel very fortunate that their business continues to remain strong during these times.

“My wife and I, as owners, feel a tremendous amount of pressure, especially when people teeter on the edge of being difficult when we’re trying to be as fast as reasonably possible,” he said. “But it isn’t lost on Judy or I or our staff that we still have jobs and a really strong business. We’re keeping our cool and trying to keep our staff and our customers safe. That’s all we can do.”