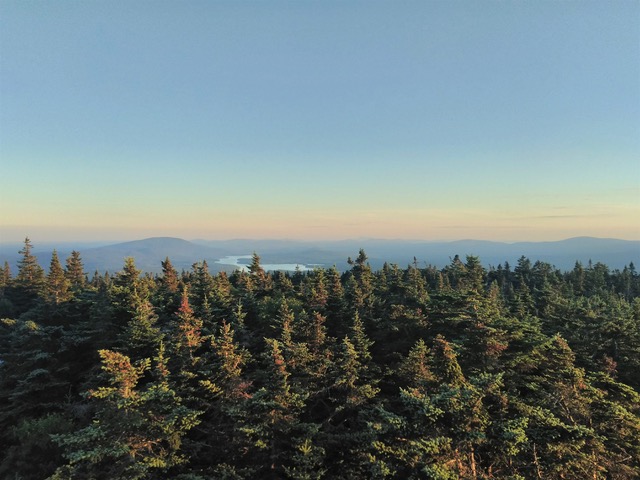 I don’t usually take special trips solely to “get” new bird species for my list (I don’t really have a list), but, this past month, I took two. Neither bird I was after breeds in the Berkshires, but the places that contained them—a mountaintop, a grassland—struck me as reflective of the diversity of habitats around us.

I’d heard that a Henslow’s sparrow, a Midwestern species, had been breeding not far from where I grew up, at the Shawangunk Grasslands National Wildlife Refuge in Ulster County, New York. Maybe I was thinking about grasslands because I’ve been living alongside a giant stretch of open field. At first I assumed it was just another cornfield, but the farmers let it lay fallow under a cover crop of alfalfa, surrounded by corn. I began to notice that it drew birds that need undisturbed grasslands—a habitat on the decline in this country. There were the gurgly, bubbly songs of bobolinks, the flash of a meadowlark once. From the edge of the field at dusk, in the quiet, I heard multiple savannah sparrows cranking out their creaky songs from different parts of the vast field.

I took my dad to the Shawangunk refuge one morning, a large expanse at the site of an old airport, and the Henslow’s sparrow was “singing” right where it was supposed to be, south of the observation deck (it’s not much of a song). Well-documented by observers every day since it arrived, the bird was almost too easy to see. I found it perched high on a weed, though it was too far away to see any markings, which are quite handsome for a sparrow.

If I look up from the cornfields at home, there is Mount Everett, the second highest peak in the state. Even more extreme is Mount Greylock, where the trail I hiked a few weeks ago wound though a lush interior of balsam and moss—like being transported a hundred miles north. Several Swainson’s thrushes were singing, present nowhere else in the Berkshires during breeding season. (I wrote last month about seeing one on migration.) Many decades ago, another thrush species, the Bicknell’s thrush, also bred on Greylock. Shy, elusive, breeding only on high peaks throughout the northeast and in similar forests in eastern Canada, it’s the northeast’s only endemic species and is considered a rare find.

So I went to Stratton Mountain in Vermont, the only Bicknell’s stronghold I had been to before, to try to find it. At 5:30 in the evening, my friend and I started hiking up the ski slopes, the shortest (and most brutal) way to the top of the 3,875-foot peak. Next to dawn, I figured evening would be best for bird activity. At the top of the slopes, we turned onto some trails and disappeared into balsam forest similar to Greylock, then emerged at the fire tower. From the top, the fir-covered canopy unfolding below, the woods mostly unbroken except by distant ponds, I could hear all the birds that had started singing—Swainson’s thrush, magnolia and yellow-rumped warblers, even a winter wren. No Bicknell’s.

The naturally small, limited range is what makes Bicknell’s so vulnerable. Its population here in these New England peaks has been fairly stable—most are protected—but it has declined in heavily-logged Canada. Bicknell’s vacated Greylock in the 1970s, perhaps an early sign of its current plight. As mountaintops warm, it will likely keep migrating upslope until it only inhabits the highest peaks. It also faces competition from Swainson’s thrushes—which are also moving upslope—destruction of its tropical wintering grounds, and high mercury levels. Still, the species, a climate-change refugee, was denied endangered status by the current administration last fall.

It was rather late in the season; birds were quieter. Apparently, unlike the Henslow’s sparrow, finding the Bicknell’s wasn’t as simple as showing up. I was contenting myself with this excursion being just a lovely hike. We chose a ski slope down and, as the light diminished, the birds got lively—juncos, Swainson’s thrushes, various calls, including a shrill, insistent wheer!

Was that it? Irresponsibly, I hadn’t studied up on my thrush calls beforehand. But it seemed to match. As I fiddled with my phone, playing the Bicknell’s call and song to myself, a thrush whizzed right by me. That had to be it, responding to its own sound. A couple of them called back and forth. I stared at the dim forest edge. “Come out, so we can go down,” pleaded my friend, who didn’t fancy descending in the dark. We couldn’t see anything, but then—two phrases of its fluty, ethereal song. It came out quiet, almost muted, for how close the bird was. We picked our way down, headlights for the final stretch, satisfied.