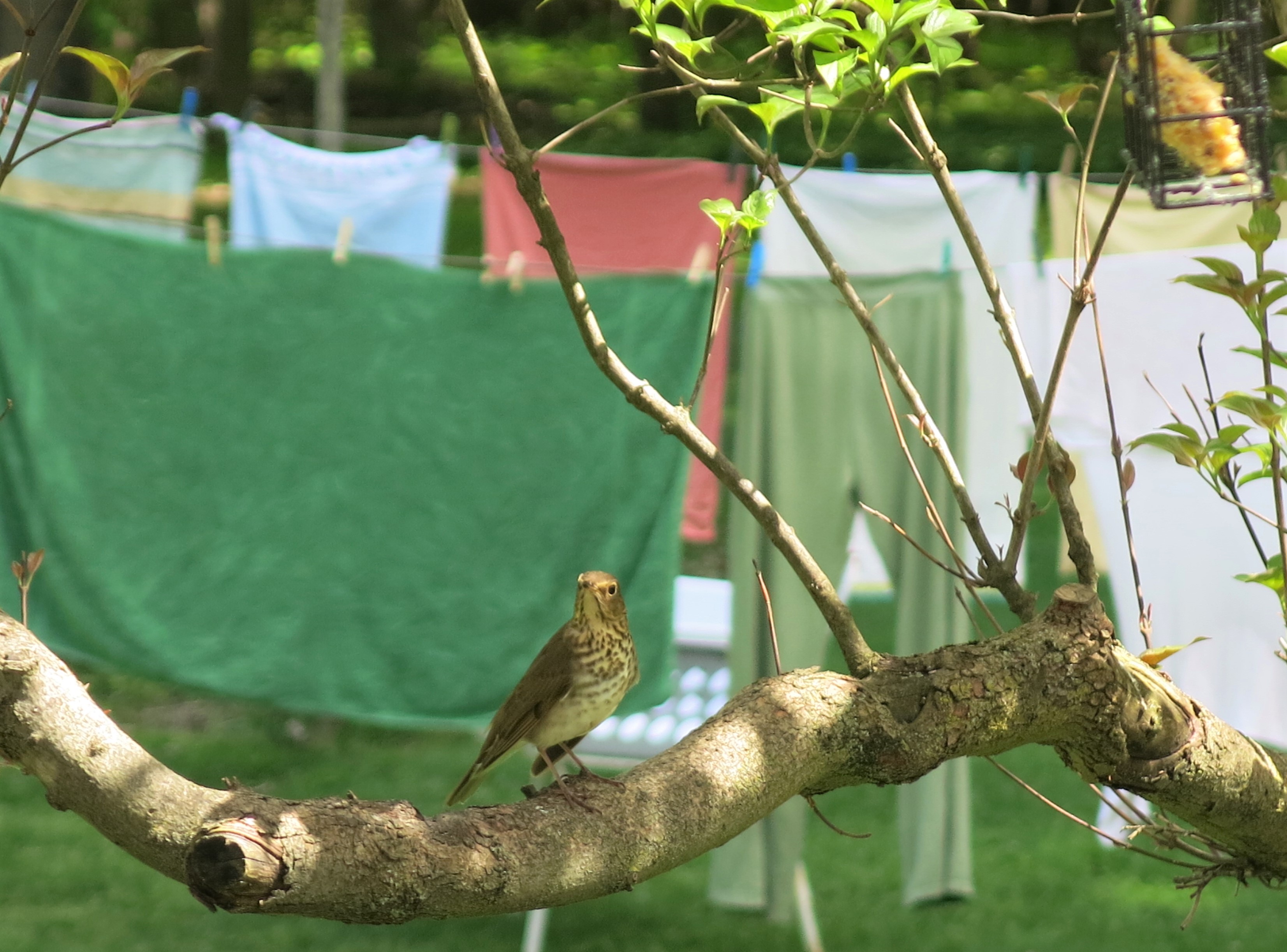 I’m on the phone with my mother who is at the hospital. She’s just had a hip replacement, but she’s worried that no one has changed the nectar in the hummingbird feeder. It is hot, and she hopes it hasn’t gone bad. I bring the feeder in, wash it and refill it. She also still keeps the feeders stocked with sunflower seeds. Bears aren’t a problem, and so she likes to see the birds up close, year-round. “It’s more for me than for them,” she says.

While feeding birds isn’t as pressing now as in the winter, birds will still happily partake of what’s offered them in our backyards to supplement the abundant insect life. Hummingbird feeders are the obvious choice but, this season, I’ve been surprised at the birds that show up for various food sources well into spring and summer. A rose-breasted grosbeak, for instance, just returned for the summer and staked out my feeder, trying to get sunflower seeds out of the wire mesh with its stout beak. The male arrived first and then, a couple of weeks later, the female was at it, too, as if he had showed her the bonanza. It was exciting to see such a colorful bird up close.

My mother (in the Hudson Valley in New York) kept a suet feeder up long past winter, until it got too hot. While woodpeckers are the primary visitors, other birds are also attracted to the rich energy source—plenty of ravenous starlings, the occasional catbird,and even bluebirds. The behavior of these bluebirds, which my mother watched from winter into spring, is testament to the adaptability and capability of birds to learn new skills. The suet inside the hanging wire cage is made for the tree-grasping feet of woodpeckers and nuthatches. At first the bluebirds kept to the ground, collecting the scraps that would fall from the other birds. Then they seemingly decided to take matters into their own hands, eventually learning how to clasp the feeder itself.

One spring day, during migration, there was a bird at her suet feeder that struck me as a baby bluebird because of its speckled breast. But after another look, I realized it was a thrush. It would perch for a bit and then make a rush at the suet, fluttering as it tried to stay in place long enough to get some of the suet. I studied it. It was plain brown, no red like you’d see on a veery or on the tail of a hermit thrush. That and the buffy facial markings made it a Swainson’s thrush, a species we might only see when it migrates through. Thrushes are not particularly known for eating suet, or for coming to feeders of any kind, but it hung around for five days or so, even flying out from under her porch steps one day. Perhaps it stayed longer than it normally would have, that suet feeder a welcome, high-calorie pit stop on its long journey from northern South America to, probably, somewhere in Canada. Then intuition kicked in and it was gone.

In my backyard, an azalea bush immediately became a hub of activity when it bloomed in the spring. Not only did hummingbirds feed on the nectar in the flowers, but orchard orioles, a less common bird in these parts, swooped in with a loud low chatter to do the same. The male orchard oriole is stunning—picture a smaller, more slender version of a Baltimore oriole, with chestnut instead of bright orange. The female was there, too. Orioles do sometimes visit nectar feeders, and this natural nectar feeder kept them entranced. Orchard orioles are more of a southern species, so it was exciting to have one right outside my window almost every morning. Whether through hummingbird feeders or lots of native flowers, nectar is one way to keep birds around all summer long.

When the azalea’s blooms faded, I stopped seeing the orioles, but they must not have gone far. A few weeks ago, I glimpsed one streaking across the cornfield next to my driveway. A few days ago, the male was singing incessantly, marking off what seemed like a triangle of its territory. The female appeared and there seemed to be some commotion in the trees along the river, so perhaps it had a nest nearby. And as they have in years past, the bluebirds drawn to my parents’ yard nested in the box my father put up. After their first clutch of eggs mysteriously disappeared, they raised a second batch successfully, and their soft chortling calls as they look after their fledglings brighten up the yard.