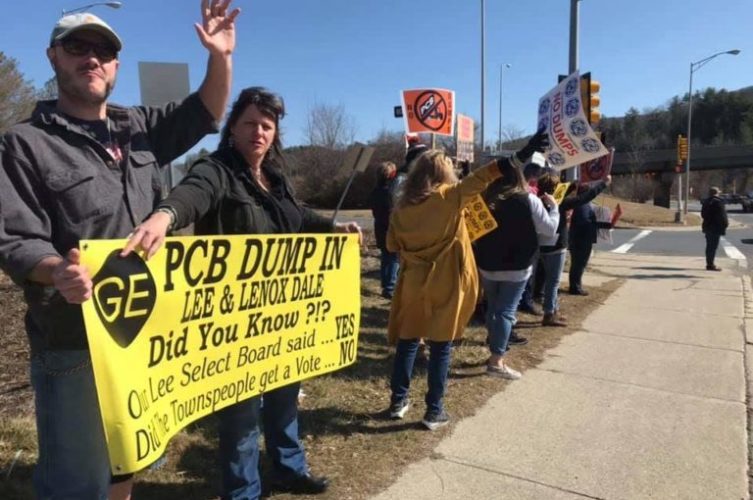 LEE — Strong words were the order of the day on Tuesday night as activists confronted the Lee Board of Selectmen over their decision to agree to an arrangement that will locate a toxic-waste dump in the town.

“Your job was to fight for us and you failed miserably,” Washington Mountain Road resident Nicole Kosiorek told the board.

At issue is what to do with contaminated soil to be removed from the Housatonic River. General Electric, which had dumped carcinogenic polychlorinated biphenyls (PCBs) legally into the river from its sprawling Pittsfield plant until the practice was banned in 1979, had reached an agreement last year to clean up the river with the five towns affected by the pollution downstream from the plant: Lenox, Lee, Stockbridge, Great Barrington, and Sheffield — known collectively as the Rest of River Municipal Committee.

In October 2016, the U.S. Environmental Protection Agency issued a plan on how best to clean up the rest of the river south of Pittsfield. It was appealed by five parties, including GE, in part because of the plan’s insistence on shipping all waste out of state at great expense to GE.

The settlement ultimately agreed to by the Rest of River committee, GE, and the EPA was seen as a compromise but many local residents, including the Housatonic River Initiative, were appalled that a second PCB disposal site was going to be built in Lee, in addition to the existing site at Hill 78 in Pittsfield that contains much of the contaminated sediment already dredged from the river upstream.

The worst of the contaminants (more than 50 parts per million of PCB) will be shipped to a federally licensed out-of-state disposal site. The lower-level contaminants — some 80 percent to 90 percent of the material — will be deposited in a lined “state-of-the-art” landfill in Lee, known as the Upland Disposal Facility, adjacent to the Lane Construction Company gravel pit property off Woodland Road at the Lee-Lenox town line.

The decision of the Lee Board of Selectmen to sign off on an agreement, through its participation in the Rest of River Committee, sparked outrage on the part of hundreds of the town’s residents. Many of them have mobilized in opposition through the HRI and a group formed more than a year ago called the No PCB Dump Action Group. The group has mobilized and garnered support mostly through its private Facebook page, which has more than 5,000 members.

Now they are also focused on raising money, through a GoFundMe page, for a legal effort to challenge the board’s decision. To that end, Great Barrington attorney Judith Knight spoke at Tuesday’s meeting in an effort to convince the board that it had exceeded its authority when it signed onto the agreement with four other towns to locate the PCB dump in Lee.

See video below of the Jan. 26 meeting of the Lee Board of Selectmen:

Knight’s contention was that the matter needed to go to town meeting for approval. Unlike most other towns in Berkshire County that have the open town meeting form of government, which means that all of the town’s voters may vote on all matters, Lee has the representative town meeting, which is composed of elected town meeting members who represent six different districts in Lee.

Knight had written a letter to the selectmen on July 5 asserting that they did not have the authority to enter into the agreement as part of the Rest of River Committee, a panel that had its own lawyer, without approval from town meeting. Indeed, on Oct. 1, 2020, the town meeting members voted “in a strong majority to rescind the agreement and set aside $50,000 to hire counsel to go about doing that,” Knight said.

“We have put forth a very strong argument for you to join us in this important effort,” Knight told the board.

But Lee town counsel Jeremia Pollard demurred. Tearing up the Rest of River settlement and “starting over,” as Knight asked the board to do, would be a violation of the agreement. He also said town meeting has no authority to settle litigation and that none of the other four towns in the Rest of River settlement took the pact to town meeting for approval.

Pollard cited Chapter 43 Section 2 of the town bylaws, which address “settlement of claims”:

Knight then suggested the town did not have adequate representation on the Rest of River Committee because the committee’s lawyer was not representing Lee.

“I don’t know how they get around that conflict of interest,” Knight said. “The formation of that committee does not abdicate the town of Lee from its responsibility to its town members. It’s the duty of its town members, not to some committee that was formed.”

“That’s utterly lacking in any legal basis,” said Pollard, who suggested an appeal to the EPA instead.

Knight replied that the contract signed by the Rest of River Committee is not enforceable because the “people who signed it did not have the authority” to do so. She vowed to file a lawsuit challenging the Lee Board of Selectmen’s actions in Berkshire Superior Court.

“Signing off an agreement of this magnitude without taking it to town meeting is an abuse of your discretion,” Knight said. “At this point, it’s really about abusing your discretion.”

“We don’t like it but we had to deal with it,” explained exasperated board chair David Consolati. “We believe we had the authority. We had to look at what was put in front of us.”

In response to suggestions about NIMBYism, Knight also suggested that perhaps leaving the PCB sediment in the river might be a better approach rather than shipping some of it away and burying the rest in Lee.

“If they’re going to dredge the river … all you’re doing is stirring it back up,” Knight said. “PCBs can travel in the air.”

As part of the settlement allowing the dump in Lee, GE is obligated to pay $25 million to the town, money one young audience member suggested was a “bribe.”

“If you were willing to take this bribe, I’m sure somewhere else with many, many less families in their communities absolutely also would,” said Stone Murphy.

“I have never taken a bribe in my life,” Consolati replied in anger, “and I am totally offended by your little accusation there about a bribe.”

Murphy emphasized that he did not believe the selectmen would benefit financially from GE’s money, but that the funds amounted to a bribe directed to the town.

At various times, there were between 75 and 100 attendees, with perhaps a dozen offering comments, all of which condemned the board for agreeing to have the dump located in their town.

“If we were to take a vote, I would vote to do the same thing we did before because the alternative was a disaster,” said board member Patty Carlino. “I certainly didn’t want a dump, but it’s one that science has established to be safe and effective.”

Kosiorek, a teacher in the Pittsfield schools who lives near the dump site, said the town has put her and her family in an untenable situation, in part because their home will be devalued. She brought two of her children, 4 and 9, to the Zoom meeting “so that we can see that these are the faces of what we are doing.”

“Within three miles of this dump are three schools, multiple home daycares, playing fields, parks, and playgrounds,” Kosiorek said, adding that the board acted “like they were above us” and were “treating us like second-class citizens.”

But the selectmen stood their ground. Incumbent board chair Tom Wickham was defeated in his bid for reelection last year by newcomer Sean Regnier, who had opposed the deal. Since his election to the board, Regnier has reluctantly embraced the Rest of River pact, prompting one commenter to assert on the No PCB Dump Facebook page that he had “lied” to voters and would be a one-term selectman. Consolati is up for reelection this spring. There were calls for his resignation in the chat feature during the Zoom meeting.