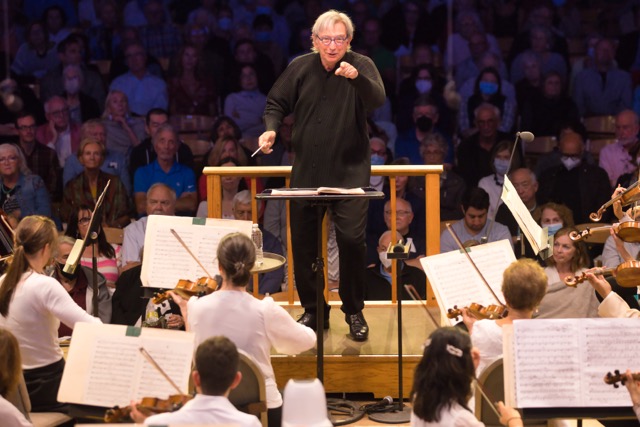 The Boston Symphony Orchestra, with the assistance of the Tanglewood Festival Chorus, concluded its Tanglewood season with a pair of concerts conducted by Michael Tilson Thomas. Each program featured an epical symphony, one by Aaron Copland on Saturday, and one by Beethoven on Sunday. These works exemplified two sides of this conductor’s musical persona and together bore a message about the conductor’s core beliefs. Copland’s symphony is built around ”The Fanfare for the Common Man,” and Beethoven’s includes a setting of Schiller’s “Ode to Joy” celebrating the brotherhood of all persons. Both symphonies received deeply committed readings by the conductor who imparted energy, clarity, and conviction despite dealing with serious health issues. The programs also included works by Rimsky-Korsakov, Rachmaninoff, and Charles Ives.

Tilson Thomas (a k a MTT) became a star conductor while still in his 20s, during a time when American maestros were rare birds; Leonard Bernstein was the first native-born musician to take the helm of a major orchestra. Bernstein acted as a mentor and role model for the young MTT, not least in taking an interest in the belatedly emerging figure of Charles Ives. Unlike Bernstein, MTT fully embraced the American composers of the 20th century (up to that point), and his debut recordings with the Boston Symphony Orchestra included works by Ives, Ruggles, Piston, and Schuman. Although issued in 1974, they are still unsurpassed in their clarity, passion, and understanding of the composers’ idioms. During his sterling tenure with the San Francisco Symphony (1995-2020) he assembled a series of programs devoted to what he labeled the “American Mavericks.” When they appeared in Carnegie Hall in 2013, I caught one program that included Ives’ “Concord Symphony” (his Second Piano Sonata as orchestrated by Henry Brandt), Morton Feldman’s “Piano and Orchestra” gorgeously played by Emanuel Ax, and Ruggles’ “Suntreader.”

As a champion of less familiar repertory, MTT demonstrated his commitment through regular programming, putting the scores in the foreground. It was therefore a very moving gesture when at the conclusion of the Copland “Third Symphony,” during the ensuing ovation, he bowed modestly and then held the score aloft, so that the audience would understand it was the true object of their enthusiasm.

Saturday’s program opened with Rimsky-Korsakoff’s “Dubinushka.” I suspect the thinking here was that this was a Russian version of the Copland Fanfare. It is a setting of a feisty workman’s song composed during the lead-up to the 1905 Revolution of which the composer was a sympathizer. While big and brassy, it was musically forgettable. This was followed by Rachmaninoff’s “Piano Concerto no. 3” with the 21-year-old piano phenom Alexander Malofeev as soloist. This was, to say the least, a controversial performance. I have written a lot about Rachmaninoff this summer, and this biggest of his concerti can be a thrilling experience. It also has achieved a somewhat distorted notoriety through the movie “Shine,” in which a young, emotionally unstable Australian pianist named David Helfgott undertakes to play what is portrayed as a work so difficult that it can kill the pianist. As his teacher, portrayed by John Gielgud, intones in his juiciest voice: “the Rach Three!!!”; and of course, in the movie it almost does.

I have to say that this performance almost killed me—sitting in a good seat in the front of the shed, I could barely hear the piano for the first few paragraphs of the music, which includes a simple statement of a flowing theme that is the constructive basis for the long first movement and returns later. Suddenly, at the solo cadenza, the piano popped out with brutal force, engaging in that life and death struggle with the monster. There was both visual and aural evidence of a titanic struggle, with tempos regularly grinding to a halt, only to resume with heroic effort. The notes were all there, but they were bathed in so much pedal that they were there for far too long, reducing Rachmaninoff’s exquisitely-shaped lines and figurations to a massive blur of sound.

Some in the audience and among the critics found this exciting and full of character. There was a loud ovation at the end of the performance. I found that the music was fragmented into tiny bits. For me, the glory of the music is that it really does all hang together in its largest dimensions, at least when it is performed in a way that is more respectful of the structure. What we got instead was a display of impressive digital dexterity and volcanic temperament. This young performer is obviously full of talent and potential—it will be interesting to see what he does with it. In order to feed even more red meat to his roaring fans, Malofeev performed a “pas-de-deux” from Tchaikovsky’s “Nutcracker” as transcribed into a virtuoso showpiece by Mikhail Pletnev.

As my concert companion remarked, the Copland was the redeeming element in the program. While the performance had some rough spots (it’s been a long season for the BSO brass), the piece moved with purpose and delineated a narrative arc that spanned its entirety. My personal take on this work, which was composed between 1944 and 1946 (in other words, straddling the end of World War II), is that it is a narrative of the historical moment: a sober recognition of and preparation for coming conflict, mobilization (both in the military and on the home-front), mourning losses while remembering happier days, and—finally—marking the outcome brought about by “the common man”—the famous fanfare—which then grows into a form of victory celebration which is, however, mindful of the grim price that was paid. This story, or something parallel to it, is told with an absence of cliché, a mastery of orchestration, a clarity of texture even in complex moments (beautifully brought out by MTT), and a large-scale drive provided by a coherent harmonic language of the composer’s own.

Sunday’s program was more cohesive. It is always interesting to see what companion piece is chosen for Beethoven’s Ninth. Unlike some Mahler symphonies, it is not quite long enough to constitute an entire program in itself, so a short opener is needed. In earlier times, it might be a Mozart symphony (in 1960, Pierre Monteux preceded the Ninth with Mozart’s Haffner Symphony); more recently a favorite companion piece has been Schoenberg’s existential scene with speaker and chorus “A Survivor from Warsaw.” Such choices offer a kind of ideological frame within which to hear the Ninth; in the latter case, a comment on the resilience of the human spirit (specifically the Jewish community in Warsaw) in the face of inhuman brutality (the suppression of the uprising in the ghetto).

MTT’s choice was characteristic: He chose Ives’s “Psalm 90,” scored for soprano and bass soloists with chorus, organ, and bells. It can briefly be described as the ultimate statement of musical Transcendentalism. Ives considered this the only one of his works that fully satisfied him; his artistic goal was to utilize the power of music to delineate the heights and depths of spiritual experience, and the piece moves step by steady step from genesis to nirvana, a kind of continuous unfolding process that grows within its own set of rules, unconnected to any known classical procedure.

Juxtaposing the Ives with the Beethoven offered a series of intriguing suggestions. One is that despite the political and national uses to which the Ninth has been put (including by the Nazis when it was performed for Hitler et al. in the 1930’s, by humanists such as Leonard Bernstein who traveled to the newly dismantled Berlin Wall in 1989 to celebrate, etc.), the Ives context refreshingly places the work outside all special pleading and at the disposal of “alle Menschen.”

On another purely musical level, the step-by-step unfolding process can be compared to the variations that Beethoven builds on the simple and by now familiar folk-ish tune in his setting of the “Ode to Joy.” While variation form was well established in Beethoven’s day and was used frequently by him throughout his career for powerful statements, this movement treats the form more freely, with widely differentiated sections that suggest an evolution of human consciousness from communal unity to the widest forms of diversity embraced in an ecstatic festival, showing yet another pathway to nirvana.

MTT’s approach to the symphony cast new light on each movement. In the first, he utilized a meticulous articulation strategy which indicated the purposefully fragmentary nature of the thematic material. Phrase accents were pointed and rests carefully placed. This clarified a typical Beethoven strategy: opposing a pressure toward forward motion with roadblocks and obstacles, building to an ever-greater tension. In this process, each detail contributes to a discourse between dynamism and stasis. The Boston Symphony Orchestra thoroughly molded its reading to the conductor’s concept.

In the scherzo, the pace was a bit on the deliberate side, offering weight and a darker-than-usual tone to what is already a demonic mood. This served to highlight the contrast with the trio in a remarkable way: The conversation among solo winds (gorgeously played) started almost naively with oboe and bassoon in counterpoint and built with the addition of the other winds to a multi-colored flowing fabric of individual voices in ideal harmony, tapering off as if receding into a pastoral distance where it might be continuing perpetually (as suggested by its return later in the movement). The theme, a rising and falling scale asymmetrically phrased, anticipates the “folk-theme” of the Ode. Such thoughts and images were aroused by the conductor’s careful management of the musical flow over all four movements, supported by a clear-eyed creative vision of a much-played work that is easy to take for granted.

The vocal soloists were uniformly excellent, including soprano Jacquelyn Stucker and bass-baritone Dashon Burton, who performed in both the Ives and Beethoven, as well as alto Kelly O’Connor and tenor Ben Bliss, whose attractive voice was a notch lighter and more flexible than the Wagnerian voice that often solos in the bacchanale episode of the “Ode.” This helped maintain a unifying flow in a movement that can often feel sectional—ultimately Tilson Thomas’s lean and transparent approach sustained the build-up to the ecstatic final moments, rendering them all the more powerful. At the end, the crowd erupted in an ovation that kept the conductor returning to the stage. One can only hope that there may be another return sometime in the future.