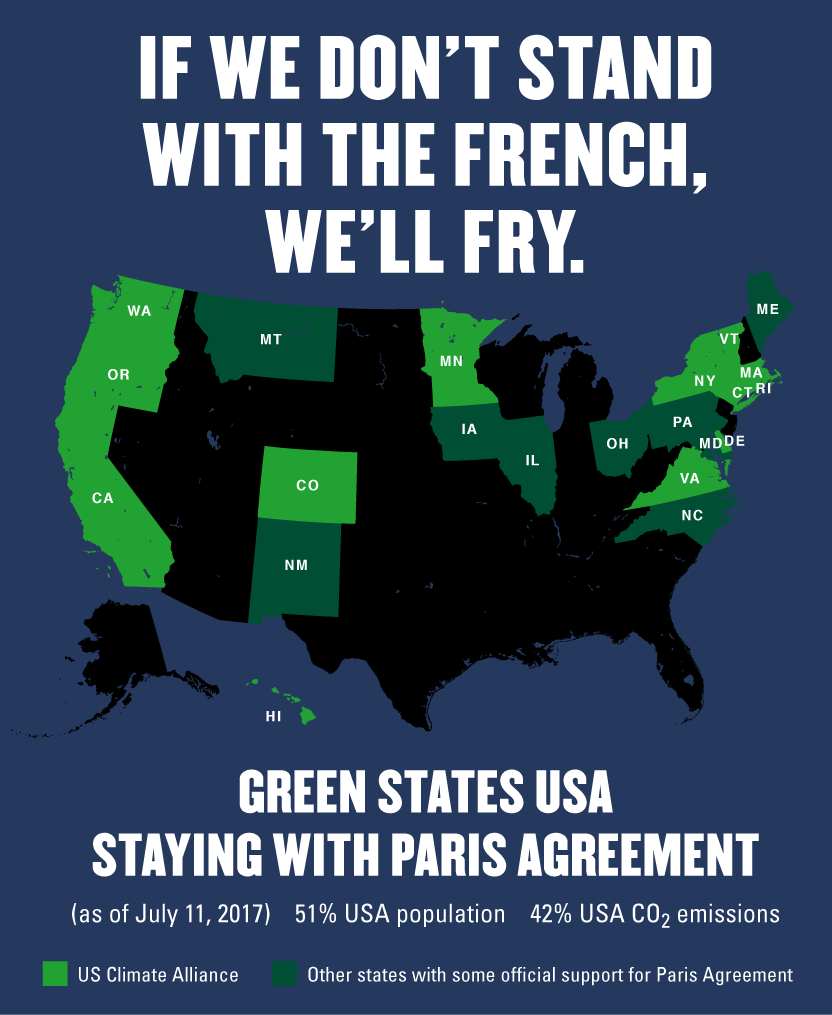 Imagine that it takes 22 years for the world’s countries to organize an inter-country football game. All countries finally agree to participate and play by the rules. The game is about to begin. Then a star quarterback, who has taken the lead in organizing the game, refuses to play and decides to sit on the sidelines. The other players go on without him, and players from his country redouble their efforts in order to compensate.

That scenario is playing out now. After 22 years of United Nations-sponsored conferences among 196 countries, the Paris Agreement was reached in 2015 – only to be rejected by President Donald Trump 18 months later.

Since the United States abandoned the Agreement, however, there has been a remarkable outpouring from states, cities and corporations determined to stay in the Agreement and meet or exceed their previous commitments to reduce greenhouse gas emissions.

As President Obama said when his successor scorned the Agreement, “Even as this administration joins a small handful of nations that reject the future, I’m confident that our states, cities, and businesses will step up and do even more to lead the way, and help protect for future generations the one planet we’ve got.”

On June 1, Trump rejected the Agreement in the White House Rose Garden, declaring that other countries are “laughing at us” while reneging on their own pledges, and convincing many that the U.S. was making unfairly large contributions to emissions reductions.

States and cities moved quickly to make pledges that would reassure the world that it could still count on participation of a significant – though unofficial – U.S. presence. 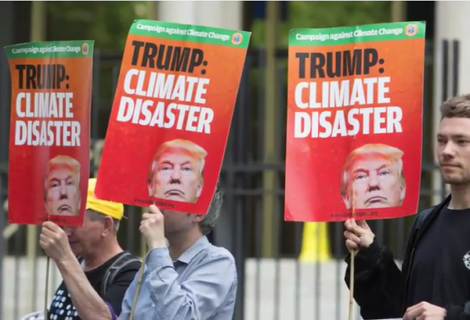 Together, these 13 states emit roughly 20 per cent of the carbon dioxide emitted by the U.S. as a whole, according Department of Energy data.

When the Alliance was formed, Governor Jay Inslee of Washington announced, “we are committed to achieving the U.S. goal of reducing emissions 26-28 percent from 2005 levels by 2025” – the original U.S. target.

According to a National Geographic online report, nine other states and the District of Columbia have expressed continued support for the Agreement even though they have not joined the Alliance: Maryland, Montana, North Carolina, Ohio, Pennsylvania, New Mexico, Iowa, Illinois, and Maine.

Some reductions will be accounted for by states already implementing renewable portfolio standards of their own. Even though this Administration has dropped the ball on climate change, twenty-nine states are already requiring a certain percentage of their energy needs to be met by wind, solar, geothermal or biomass generation.

California is the state heavyweight champion for climate change. Guiding a state economy that recently surpassed France to become the sixth largest in the world, Governor Jerry Brown has been meeting with Mexico, Canada, and China to talk climate policy. He has a lot to share.

Not only did California enact stringent greenhouse gas reduction legislation in 2006 to reduce emissions to 1990 levels by 2020, but it is accomplishing that goal while growing its economy.

In fact, according to the California Energy Commission, wind production has doubled and solar power has increased by a jaw-dropping 2,342 per cent. And, since the enactment of the California Global Warming Solutions Act of 2006, the state has added more than 1.3 million jobs.

Cities have stepped up to the plate as well. So far, 364 Climate Mayors representing 66 million Americans have pledged to uphold the Paris goals. 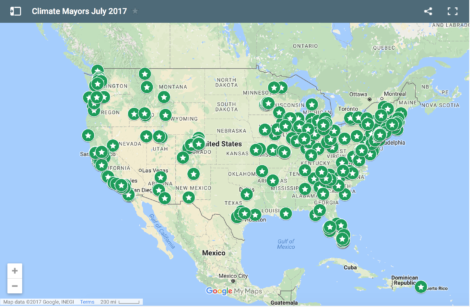 Founded by Mayor Eric Garcetti of Los Angeles, and the former mayors of Philadelphia and Houston, the coalition of mayors is committed to reducing greenhouse gases in their cities.

Other cities can sign on through the climate-mayors web site.

Cities interested in signing up “to the spirit and goals of the Paris Climate Agreement” must develop community greenhouse gas inventories, set near- and long-term targets to reduce emissions, and must develop a Climate Action Plan aligned with the city’s targets.

The Private Sector Steps Up

Numerous corporations have also jumped into the climate change arena. In an op-ed for CNBC, Lynelle Cameron, president of the Autodesk Foundation, said, “”In Trump’s first few months in office, he has done more to catalyze and motivate the private sector than Hurricane Katrina or Sandy, or the work of talented environmental organizations put together,” And departure from the Paris Agreement “will activate the private sector like we’ve never seen before.”

In the first days after Trump’s announcement withdrawing the country from the Paris Agreement, numerous companies, as well as college and university leaders joined “We Are Still In,” a pledge to continue to honor the Paris Agreement started by Michael Bloomberg.

Among the business giants who joined, pledging corporate reduction of greenhouse gases, use of renewable energy, and sustainability efforts were Google, Apple, Adidas, Facebook, Tesla, Lyft, Target, EBay, and Nike.

Over 20 of the Fortune 500 companies representing 6.2 trillion of the U.S. economy are actively committed to meet the U.S. Paris goals.

On July 12, two quirky, independent and powerful political titans – both well into their 70’s – met to consolidate the climate resistance. California Governor, Jerry Brown and Michael Bloomberg, former mayor of New York, have now folded into one organization the State Climate Alliance, the Climate Mayors, and the signatories of “We Are Still In.”

According to the press release, America’s Pledge “will compile and quantify efforts from U.S. states, cities, businesses and other actors to address climate change in alignment with the Paris Agreement.”

Bloomberg, who is the United Nations Secretary-General’s Special Envoy for Cities and Climate Change, declared that “the American government may have pulled out of the Paris Agreement, but American society remains committed to it…and we will redouble our efforts to achieve its goals. We’re already halfway there,” he said.

Governor Brown is now Special Advisor for States and Regions ahead of the United Nations’ 23rd Conference of the Parties to the Framework Convention on Climate Change (COP23).

The goal of America’s Pledge’s is to compile and showcase existing climate commitments of U.S. subnational and non-state actors at COP23, to be hosted by the Government of Fiji this coming November in Bonn, Germany.

To make sure that the emission reduction proposals of so many non-state actors are credible and quantifiable, Brown and Bloomberg have lined up two prominent environmental groups, the Rocky Mountain Institute and the World Resources Institute to lead “an inclusive analytical effort.”

America’s Pledge will work to compare the impact of its reduction commitments with the business-as-usual scenario of the Trump Administration policies, comparing both outcomes against the U.S. Nationally Determined Contribution of 26-28 per cent reductions against a 2005 baseline by 2025.

Happily, there is a mechanism built into the Paris Agreement for recording non-state pledges. As the digital business publication, Quartz, put it, the Paris Agreement accidentally created a backdoor for U.S. states, cities and companies to defy Trump’s defection.

NAZCA is “a global platform that brings together the commitments to action by companies, cities, subnational regions [or, states in the U.S.], investors and civil society organizations to address climate change.” 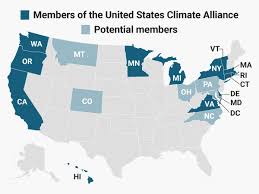 Although the America’s Pledge group cannot be considered a legal member of the Paris Agreement, its pledges will count, and their progress in meeting the pledges will be measured through NAZCA’s data partners under their uniform measurement and reporting standards.

The philosophy of the Paris Agreement was to encourage broad inclusion and entry, but to carefully check the actual implementation and realization of emission reduction pledges. America’s Pledge is aware of the need for credibility and uniformity of emissions measurements, which is why it is teaming up with experts in this area.

Although it is doubtful that anyone anticipated that a huge player in the process would be suddenly sidelined, NAZCA provides the perfect platform for continued action by non-state U.S. players.

The U.S. Cannot Formally Withdraw Until 2020

The earliest that a country can give notice that it will withdraw is November 4, 2019.

Then, a year later, the U.S. could finalize its withdrawal, making the earliest possible date November 4, 2020, the day after the next presidential election.

Although it is difficult to withdraw from the Agreement, it is easy to reenter. A new president could have the U.S. back in in a month.

Meanwhile, U.S. delegates could go to the next Conference of the Parties in Bonn, Germany in November. If they do, it is likely that they will attempt to renegotiate U.S. commitments, which Trump advocates, even though Germany and France have flatly turned down that idea.

Whether or not U.S. delegates attempt to undermine or modify the U.S. agreement, it is certain that Mr. Bloomberg and Governor Brown will go to the Bonn COP to present America’s Pledge. Governors from Climate Alliance States, mayors of large U.S. cities, and corporate representatives will also likely make appearances — showing the world that the “non-state U.S” is still very much in the game.