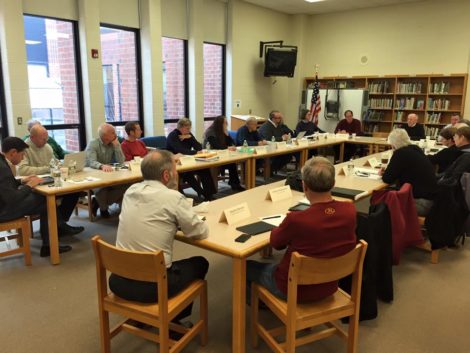 The Berkshire County Education Task Force in a meeting earlier this year. The task force voted on Saturday to recommend a single countywide school district.

Dalton — A panel charged with finding ways to make the county’s schools more efficient and sustainable has recommended the creation of a single-school countywide school district within 10 years.

Before making its recommendation, the Berkshire County Education Task Force had narrowed its options to three: the creation of one countywide district, consolidating the county’s 19 school districts into three, or the establishment of three regional supervisory unions.

“I thought it was about time we made a recommendation,” Steve Bannon, a task force member who chairs the Berkshire Hills Regional School Committee, said in an Edge interview. “It’s a sound recommendation but there is a lot of work to do to work out the details.”

Of the 30 members comprising the task force, 24 were present at the task force’s July 15 meeting at Nessacus Regional Middle School. The vote to recommend option one was near unanimous at 23-1.

“This was not the direction we thought we were headed when we started two years ago,” explained John Hockridge, who chairs the task force and is a member of the North Adams School Committee. “But once we started doing our work, a clear consensus evolved that the one-district option presented the best opportunities for education and improved financial sustainability for the school districts.”

“It was a shocking recommendation,” added task force member Andrea Wadsworth, who is also business administrator for Lee’s schools and sits on its school committee. “When I first sat on that [task force], I never thought I would advocate for it, but then as the information gets laid out and you see the depth and breadth of all the options for the students, it made perfect sense.”

Members of the task force characterized the recommendation as “aspirational” because it would require not only special legislation at the Statehouse on Beacon Hill, but the approval of most of the county’s municipalities and school districts as well.

Still, members are confident that the goal is achievable by 2027, which is when the task force would like to see it realized. The task force estimates the consolidation of the county’s 19 schools districts into one could save taxpayers up to $36 million per year.

Bannon emphasized that a single countywide district would not necessitate the “mass closings of schools” some critics had feared, though he would not rule out the possibility that some schools could be shuttered if enrollment numbers warranted it.

“Not everything has all been fleshed out,” Bannon explained. “No student at Sheffield elementary school will be sent to Williamstown. Obviously, there will geographical limitations.”

Asked why the task force has chosen one district over three, which had been viewed as a compromise measure, Hockridge said, “One of the arguments was that, 10 years from now, we might be in the same situation. If the projected decline in enrollment continues, then our newly structured districts could experience the same challenges.”

Hockridge credited several existing districts as having already begun the process of sharing services to save money and resources. Berkshire Hills Superintendent Peter Dillon, who is also a member of the task force, is also superintendent of Shaker Mountain School Union #70, a school system that includes some small towns in north and central portions of the county. And two years ago, Berkshire Hills and Lee initiated talks on merging their districts.

How would the savings be achieved? Wadsworth pointed to several possibilities. State aid for transportation, known as Chapter 71 funds, is reserved for regional school districts. Municipal districts such as Pittsfield, Lenox and Lee do not have access to Chapter 71 funds, but they will if they become part of a regional district.

In addition, public school choice has been a vexing issue for several years, as the tuition paid by sending districts to receiving districts has been stuck at about $5,000 since choice was implemented as a result of the 1993 Education Reform Act that overhauled how education was funded in Massachusetts. Presumably, in a unified district, there would be no need to charge tuition for a student from, say Pittsfield, to attend school in Lenox.

Educational opportunities would be greatly enhanced as programs could be shared across schools whose enrollments are too small to support them individually. Hockridge has detailed them in a column he published in The Edge in April: “In the Berkshires, a school crisis – and opportunity.”

But Hockridge said there are many details that will need to be worked out as the task force enters Phase 3 of its mission. What would happen, for example, to debt accumulated in one district (e.g. Berkshire Hills is still paying off $16 million in bonds issued for its new regional elementary and middle schools in 2005) when all the districts are merged into one?

“But I don’t think we know all the implications yet,” Bannon said. “I’m not sure we know how a 15,000-student district would work.”

In an effort to mold the recommendation into a pragmatic proposal, the task force voted to hire Karla Baehr of the District Management Group, a nationwide educational consultancy. Baehr is a former deputy commissioner of the state Department of Elementary and Secondary Education.

The task force has been meeting every third Saturday to address the challenges of what Hockridge says are “declining student enrollment, near-stagnant financial resources, and reduced academic offerings.”

Other task force members were enthusiastic about the recommendation.

“This is great news – a very big step forward,” said Adams town administrator Tony Mazzucco. “Berkshire County is taking the boldest step in education the commonwealth has seen in decades.”

“The task force has now decided that only the bold move of transitioning within a decade to a single district for our county can ensure the future soundness of this region’s educational programming for all our students and all our communities,” William Cameron, retired superintendent of the Central Berkshire Regional School District, said in an email. “Knowing that considerable challenges need to be met and obstacles overcome if this aspiration is to be realized, I fully support that decision.”

One skeptic of school consolidation contacted by The Edge was less than enthusiastic. Egremont resident Susan Bachelder was a staunch opponent of the Southern Berkshire Regional School Committee’s decision, now reconsidered after a lawsuit from the town of Egremont, to close the South Egremont School.

Bachelder favors Option 3, which would establish three supervisory school unions across the county. Contrary to the conventional use of the term, a school union does not represent organized labor, but rather it is what Hockridge calls “an umbrella over the current structure” that retains more local control for towns than a formal regional school district.

“It is suggested that prior to larger regional school districts, we establish supervisory unions by region as an easier path to consolidation,” Bachelder said in an email.

Bachelder said she remains unconvinced that the creation of larger regional school districts will cut school taxes. “Cost savings in the collective purchase of Xerox paper does not warrant greater centralization of power,” she said. “Closures and consolidations have never brought about a budget decrease.”

The task force, Bachelder said, “is comprised of vested educational interests who, much like the bureaucracy we complain about in Washington, seem to think creating more bureaucracy is the solution to declining population.”

Charlie Flynn is a former Egremont selectboard chairman and a former member of the Southern Berkshire Regional School Committee. Flynn is a longtime critic of the BCETF and would prefer a different approach.

“It takes the parent and the community out of education,” Flynn said of the proposed single district. “If you want to turn this whole region into a retirement community, this is the way. No parent in their right mind would stay in this area.”

Hockridge says, aside from transportation and school choice, other savings could come from consolidation of the central offices of the 19 districts.

“You could also share teachers or do some distance learning,” he explained. “And with a regional district, there would be only one school committee.”

This fall, the task force will get out on the road, as it also did in December, to speak to school committees, municipal bodies and focus groups about its proposal. The task force’s next meeting will be Saturday, Aug. 12, at Nessacus Middle School, Hockridge said.