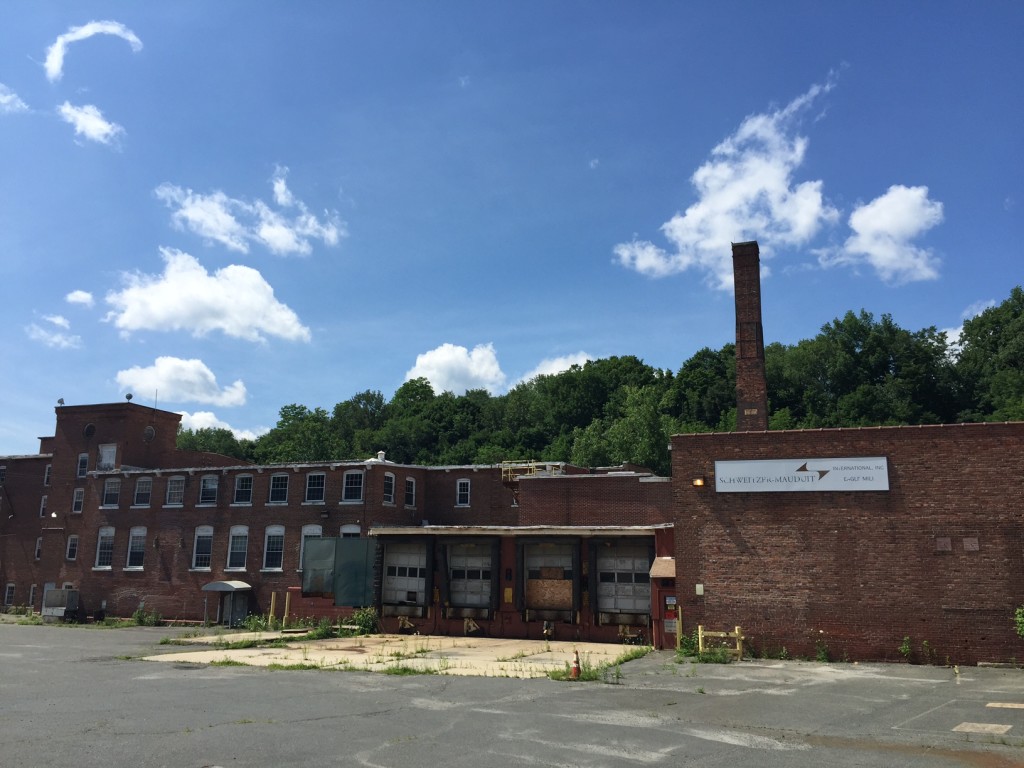 Lee — In a setback to redeveloping the Eagle Mill complex here, the National Park Service (NPS) Friday (July 24) announced that it is upholding its May 19 decision that designates all the buildings within the complex historically significant, including two more recently built additions that require demolition to develop the site, making it more difficult for Great Barrington developer Jeffrey Cohen to turn the site into a commercial center with retail, offices, restaurants, affordable and market-rate housing.

Paul Loether, Chief of the National Register of Historic Places in the National Historic Landmarks Program visited the site, once a thriving paper mill, in early July to better understand the complexity of the situation. But even then Loether said his agency’s rules were “a little inflexible,” though he also said he would try to get “creative.”

But it is those additions, or “wings,” built for utility and expansion between 1932 and 1964, that are tripping up a $70 million development poised to create more than 200 jobs and throw a healthy wad of tax money into town hall every year.

Loether explained that the decision isn’t a denial of the project, but of the “period of [historical] significance,” which the NPS says must run to 1964, rather than to 1932 as Cohen thought it should.

“It’s a shame,” said Cohen, of Mill Renaissance, LLC, “because they could have said the opposite, and no one would have questioned it.”

“Beauty doesn’t necessarily count,” Loether explained. “From a historical standpoint, the buildings that are there now are all connected…they’re not great buildings, but they are what they are, and in the history of the community they were something that kept that plant running for a while longer.”

Yet from his Washington office, Loether beamed a small ray of hope. He quoted Yogi Berra’s quip, “it ain’t over till it’s over,” noting that the second part of Cohen’s application now goes “downstairs” to the historic tax credit department, to which he said he would convey the complexity of the situation, which is that Cohen, in order to develop the property, needs to knock down the two newer structures on the narrow site in order to provide for modern-day standards, regulations, and housing needs, like room for emergency vehicles.

But in order to get those credits, which Loether said will be an “uphill battle…[Cohen] will need to make a very good case…”

That case is this, Cohen said: the entire site’s obsolescence may allow the demolition and still qualify it for tax credits under another set of regulations. “The entire site, the way it is today, is something that couldn’t be permitted under today’s regulations,” he said. “The part we want to reuse is the most important historically.”

“We accept the fact that all the buildings evolved over 207 years and were part of the complex. But they were developed over a period of time without respect to land use, conservation, wetlands, the river front, emergency vehicles, flood plain…many issues that in this day and age are applicable to the development of any land…no one could come in today and develop it without making changes.”

Cohen, who praised Loether’s “accessibility and candor,” and said it was clear Loether did everything he could to creatively interpret the regulations, does not want to “lose the entire historic complex — no one will come in and develop it, because they can’t change it.”

Cohen, who sits on Great Barrington’s Conservation Commission, isn’t giving up. He’s already put “several hundred thousand” toward pre-development costs, and says he will make something “productive” happen at the site “for me and all of us in the process, or I will die trying.”

If he can’t make it work with those tax credits, he is considering as a very “remote” possibility, tearing down the whole complex and putting in apartment buildings, but said that it may be impossible due to demolition costs and contamination, among other issues. “You lose the culture, lose the history…but maybe we say to hell with that and clear the whole site — we have six acres on the water in nice area of town.”

Cohen would still have to purchase the site, which in 2012 was going for around $700,000. But since there isn’t exactly a line around the corner to buy the place, that number may go down, he said.

“Doesn’t it make more sense to let these two buildings go and save the ones that look and act like historic buildings?” he added.

So far, no one seems to disagree with Cohen, including Loether.

“The [NPS] programs are designed to leverage historic preservation,” Loether said. “Those policy goals sometimes rub up against each other. I wish I could just wave a magic wand for these guys, but professionally I can’t. Sometimes you make decisions you don’t like and this is one of them for me.”

He added that it would have been a “really easy” decision if these buildings were “laced with PCBs (polychlorinated biphenyls).”

“It could be a deal-breaker,” Rep. Pignatelli said last month. “We’re on the cusp of a $70 million development of an old mill in the heart of downtown Lee and we’re getting hung up on which buildings need to get restored because they’re old.”

Cohen has even met with Massachusetts Lt. Gov. Karyn Polito and her chief of staff. “They had done their homework,” he said. “My impression was that she understood and was supportive. I don’t know what she may or may not do in terms of support.”

Polito’s office was unable to comment on the matter, however.

Cohen says that if he had known how hard this process was in Massachusetts, he wouldn’t have begun it. “Ignorance got me into this hole but I’ll dig my way out and accomplish something.”

And then he quoted from Ted Kennedy’s eulogy for his brother Robert, with a famous line paraphrased from George Bernard Shaw. “Some men see things as they are and say why? I dream things that never were and say why not?”