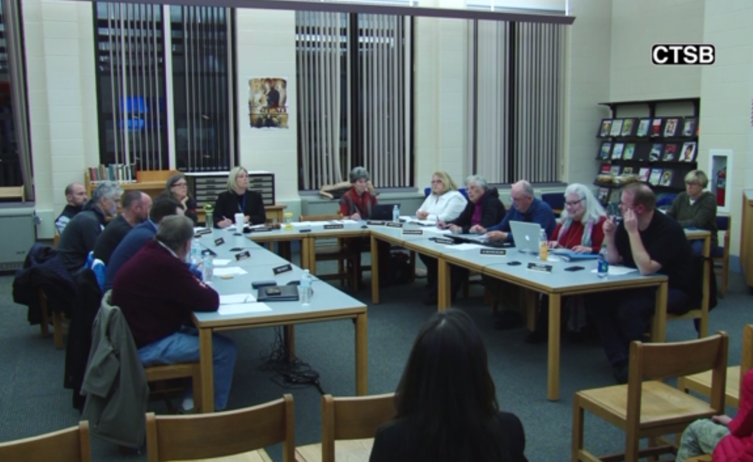 Sheffield — Though she firmly denies it, the chair of the Southern Berkshire Regional School Committee has apparently violated the state’s open meeting law by conducting deliberations outside a posted meeting, prompting at least one district resident to announce her intention to file a complaint with the state attorney general’s office.

Jane Burke, who chairs the school committee, sent an email to all nine of her fellow members on the morning of October 7 after receiving a message on the previous day from this reporter that The Edge was working on a story about a lawsuit and whistleblower complaint from longtime district employee Kurt DeGrenier.

The lawsuit in question seeks unspecified damages and alleges workplace retaliation and breach of contract after DeGrenier had drafted an earlier complaint that his son, a student in the district, was not receiving the services he was entitled to.

Defendants in the complaint are the district, its school committee members, superintendent Beth Regulbuto and Student Services director Sandra L. Hubbard — all individually. Click here to read it.

The email appears to be a violation of the section of the state open meeting law that forbids the deliberations of a public body outside of a noticed meeting.

See image below of the relevant portion of the state open meeting law guide:

The message, obtained by The Edge and portions of which were posted on social media, lays out news media strategy for the school committee in the wake of the disclosure of the DeGrenier lawsuit and whistleblower complaint.

Burke’s email contained a statement to the news media on the DeGrenier matter she said was drafted by the school district’s attorney at Murphy, Lamere & Murphy, which is based in Braintree. The statement says, in part, that the district “denies the allegations contained in [the DeGrenier] complaint and intends to vigorously defend against these baseless claims.”

“It is especially important that we all use the statement above in response to anyone who seeks comment from us,” Burke wrote. “While we had heard a threat that the story would be given to the press it is never the less [sic] very disturbing to be faced with this. Let’s stand strong in support of Beth and Sandy. There is good work to do for students.”

“Since my school committee account is inaccessible today I am wondering if yours might be to [sic] so I am sending this to your personal emails because it is urgent,” Burke wrote.

It is not clear whether Burke received any replies from other school committee members, but even if she did not, the improper nature of sending an email to a quorum of a school committee is clear in the open meeting law, whose purpose “is to ensure transparency in the deliberations on which public policy is based.”

“For example, if a member of a public body sends an email to a quorum of a public body expressing her opinion on a matter that could come before that body, this communication violates the law even if none of the recipients responds,” a 2017 guide to the open meeting law states.

Apprised by The Edge in an email of the planned open meeting law violation complaint and asked to respond to the apparent violation of that law, Burke replied in an email to The Edge:

“I deny any violation of the Open Meeting Law as alleged in your email. As this matter pertains to the underlying litigation, as well as a threat of new litigation, I cannot comment further,” Burke wrote.

“However, please know that both I, in my role as Chair, as well as the SBRSD Committee, take compliance with our obligations under the Open Meeting Law very seriously. If an Open Meeting Law complaint is filed, which your email states is the case, the District will respond accordingly. Thank you.”

Burke’s action spurred pushback on social media, including Save SBRSD, a Facebook group that is often critical of the district and which touts itself as “a forum for parents and members of the Mt. Everett community.”

Jenny Brown, an Egremont resident, called Burke’s correspondence a “secret email” and a “violation of the open meeting law.”

“[Burke] is a public servant and she cannot conduct secret meetings via email,” Brown wrote on Save SBRSD. “We did not elect our school committee to ‘stand strong in support of Beth and Sandy.’ We elected them to represent US.”

Brown said she plans to file a complaint with the state attorney general’s office, which enforces the open meeting law. In most cases, the complaint must be filed within 30 days of the alleged violation. Representatives of the AG’s office were not available over the holiday weekend for comment.

The complaint must be filed not only with the attorney general’s office, but with the public body’s chair, in this case Burke herself. If the public body does not respond within 14 business days and does not request an extension to respond, then the complainant must contact the open meeting law division of the AG’s office division for further instructions.

Out of concern for possible reprisals, few parents were willing to speak on the record to the Edge regarding the apparent open meeting law violation. One who is close to the situation spoke on the condition of anonymity.

“Clearly the school committee is confused as to what their role is supposed to be. Honestly … I am disgusted,” the parent wrote in an email. “They were elected to be the voices of their constituents, and to create policy for the district … It’s obvious that they feel they are above the law as this is not the first OML violation.”

Indeed, there was another recent violation the school committee has acknowledged. In December, longtime school committee member Bonnie Silvers was ousted from her leadership position on the committee. The vote on her replacement was taken with a secret ballot, a clear violation of OML, which states unequivocally that, “No vote taken by a public body, either in open or an executive session, shall be by secret ballot.” A revote was performed the following week.

Save SBRSD urges district residents to attend a “Save Our Schools” event next Thursday, Oct. 24. Organizers plan to picket the school in advance of the school committee meeting that night. One commenter on Save SBRSD said, “There will be more witnesses sharing their stories next week.”

On Wednesday, Oct. 16, the school committee’s executive evaluation subcommittee meets at 5 p.m. upstairs in the Eagle’s Loft at Mount Everett Regional School. On the agenda is a discussion of the superintendent’s goals, as set forth in her evaluation of last year. Click here to see the goals and click here to view her first-year evaluation in which she was rated “proficient” overall. She achieved the same rating in her second-year evaluation.

“We need to let it be known that we do not want the superintendent’s contract renewed,” an anonymous post on Save SBRSD said. “Please show up in support of your children’s education.”

Regulbuto was hired in 2017 to replace the retiring David Hastings. She is in the third and final year of her current contract.

The district has been battered by challenges and tragedies over the last few years, including declining enrollments that have caused Southern Berkshire to consider consolidating with the Berkshire Hills Regional School District in Great Barrington.

The district had a rocky opening last September when science and technology teacher Jim Berlstein wrote a post on Facebook complaining of a “hostile work environment” and, referring to the school district, added, “It is not safe.” DeGrenier began that year under suspension for reasons he alleges in the aforementioned lawsuit and whistleblower complaint.

The Southern Berkshire district was also embroiled in a lawsuit from the member town of Egremont, which was angered when the school committee decided to put the South Egremont School on hiatus. The suit has since been settled and the school reopened.

In the same week as the illegal secret ballot vote, the district sustained a bomb threat and a school committee member, Dennis Sears of Sheffield, announced his resignation and walked out of a school committee meeting, angered over his colleagues’ support of a settlement with Egremont concerning the withholding of payments from the town to the district. Sears subsequently rescinded his resignation and rejoined the committee.