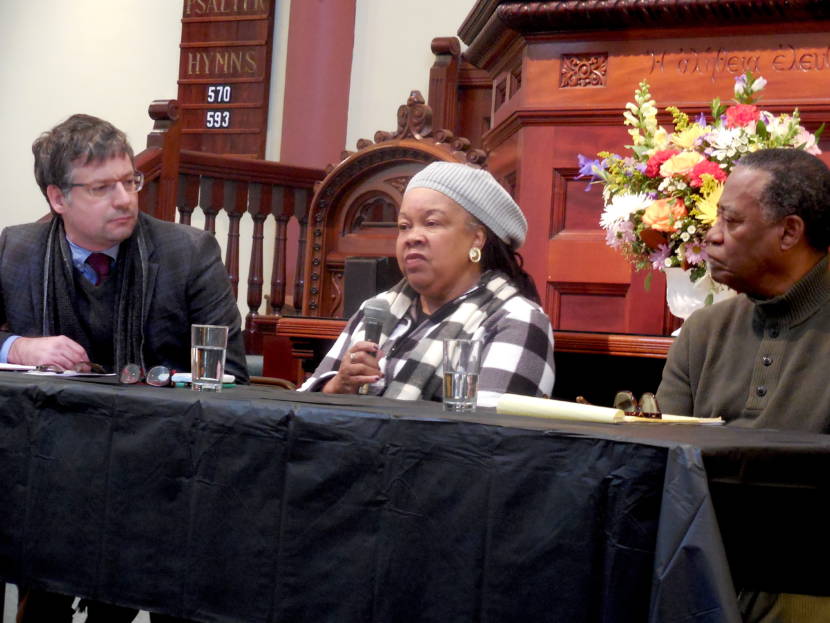 Great Barrington — It may have been one of the most bitterly cold days in memory, but the oppressive weather could not extinguish the warmth and hope South County residents felt on the occasion of what would have been the 90th birthday of Rev. Martin Luther King Jr.

About 70 people turned out Monday at the First Congregational Church for a service and interfaith celebration honoring the birthday and teachings of the iconic civil rights leader. And there was also prayer, song, dance and a panel of distinguished scholars, all of whom have studied and written about King and African American history.

The event was hosted by a number of organizations, including the Du Bois Legacy Committee, which was formed in 2016, in part to spearhead a townwide celebration of the 150th birthday of W.E.B. Du Bois, a renowned scholar and civil rights activist who was born in Great Barrington and graduated from Searles High School.

Rev. Cara Davis, the longtime former director of Construct Inc., welcomed attendees, while Rev. Mattie Conway, the sister of the late Rev. Esther Dozier of the Clinton A.M.E. Zion Church, led a prayer before all joined in singing “We Shall Overcome,” the iconic gospel protest song and anthem of the civil rights movement. Also on the musical agenda was “Lift Ev’ry Voice and Sing,” the NAACP anthem written by Great Barrington resident James Weldon Johnson.

The panel discussion on King and his legacy featured Wesley Brown, Frances Jones-Sneed and Justin Jackson. Brown is a visiting faculty member at Bard College at Simon’s Rock and a professor emeritus of English at Rutgers University. Brown is also the author of three novels; he edited a book on Frederick Douglas and is one of four narrators of a film on Du Bois, “A Biography in Four Voices.” Brown also worked in the 1960s on voter registration in Mississippi.

Jones-Sneed is professor emeritus of history, political science and public policy at the Massachusetts College of the Liberal Arts in North Adams. She has directed grants for the National Endowment for the Humanities and is co-director of the Upper Housatonic Valley African American Heritage Trail. Jones-Sneed is also editing the autobiography of 19th century minister Samuel Harrison and is working on a monograph about Du Bois.

Jackson is a historian, author and assistant professor of history at Simon’s Rock. Jackson has also lectured on Du Bois. He has completed a book which is currently under contract to be published, entitled The Work of an Empire. Last year, Jackson wrote a three-part series for The Edge entitled, “W.E.B. Du Bois and his politics: A complicated and controversial legacy.” Click here to read it.

Among the questions Jackson asked Jones-Sneed and Brown was how best to further King’s message and the most effective method of activism for social justice and against racism. Both responded that the local level is the best place to start.

In addition to the brain food, there was entertainment provided by Pete Wilson and company. Wilson is a local musician who was a member of the Clinton A.M.E. Zion Church, which is being restored.

The project took a big step forward last week when the group leading the restoration hired a design and architectural team. Indeed, Wray Gunn, who chairs Clinton Church Restoration, took the opportunity to pass around the collection plate to raise money for his group.

Former First Congregational Church Pastor Charles Van Ausdall, who was known as “Pastor Van” and retired in 2016 after 30 years at the church, also put in an appearance and spoke briefly.

Below, to remind us of the eloquence and moral persuasiveness of Rev. Martin Luther King Jr., and why we celebrate his birthday, is his 1963 “I Have a Dream” speech at the Lincoln Memorial in Washington, D.C.: