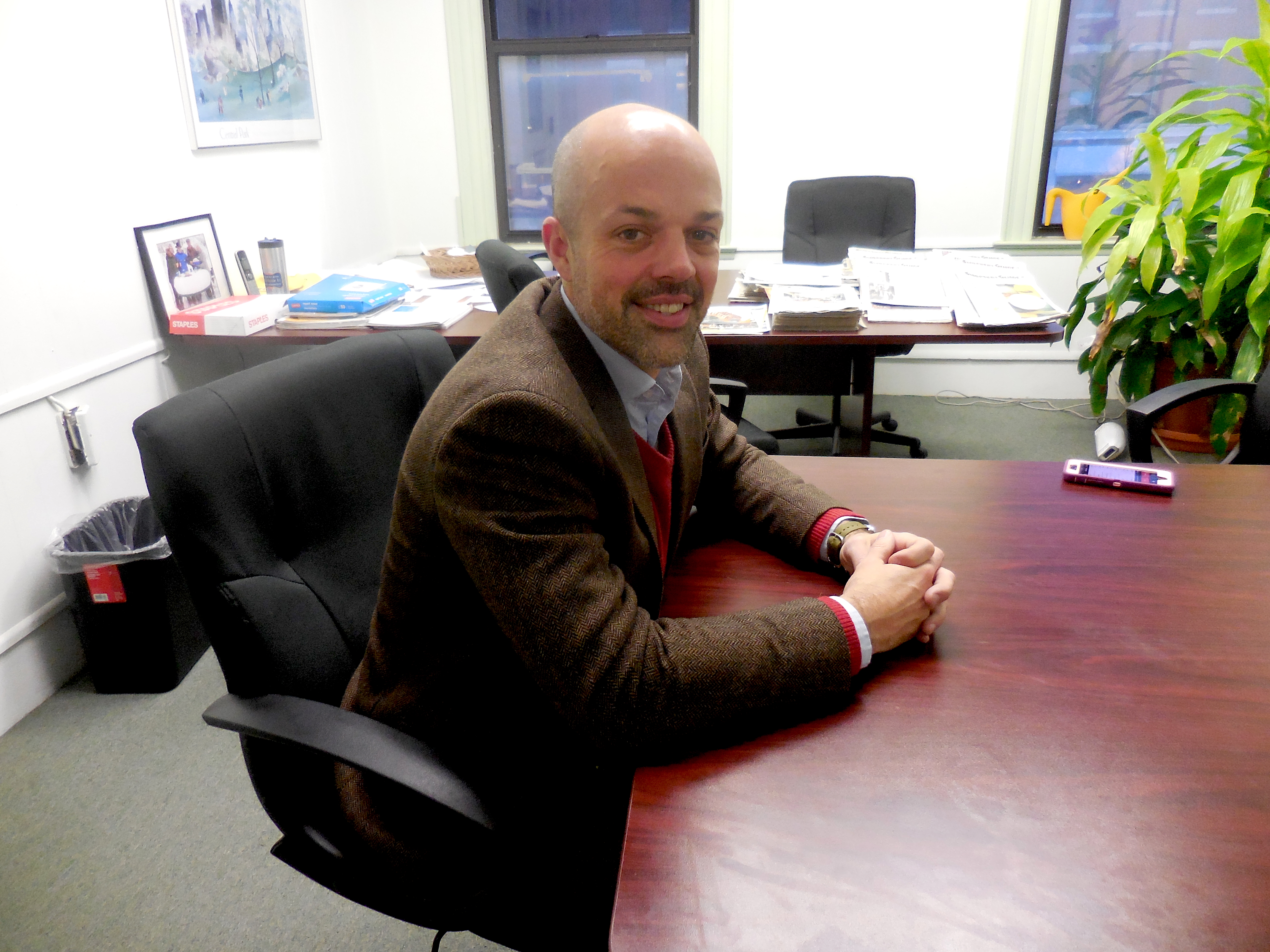 Great Barrington — When Adam Hinds decided to run for state Senate last year, he pretty much knew what he was getting into. After all, he had been a community organizer for years in Pittsfield. He was knee-deep in politics as campaign manager for former Congressman John Olver and worked as a regional director for the presidential campaign of John Kerry in 2004.

But on the same joyous day that Hinds was elected — Nov. 8, 2016 — so too was President Donald Trump, who ushered in a new era of politics and with it a more divisive and in-your-face style than anyone can remember.

Trump lost Massachusetts by more than 27 percentage points and the Bay State — dominated as it is by the Democratic Party — is hardly wracked by the sorts of divisions one often sees in the purple states.

Still, Hinds can sense the tension even in his Senate district. Geographically the largest in the state, the Berkshire, Hampshire, Franklin & Hampden District includes all of the Berkshire County and portions of the other three. It’s roughly the size of the entire state of Rhode Island.

“It’s there in Massachusetts, too, but not quite at the same level of division,” Hinds, who is nearing the end of his first year in office, said in an interview last week in The Edge newsroom in downtown Great Barrington.

“On Nov. 8 last year, none of us would have anticipated how the year would be politically, so in that sense, it’s nothing like I anticipated,” Hinds said of his inaugural year. “But with it comes a new level of unpredictability injected into every single day.”

Ironically, the state issues Hinds must deal with every day do get people’s attention but it’s the local issues where passions seem to run highest. The decision by the Berkshire Museum to sell some of its Norman Rockwell paintings and a nurses’ strike at Berkshire Medical Center seemed to capture the imaginations of Berkshire County residents.

For obvious reasons, Hinds avoided taking sides on those issues (this statement he released on the museum is a good example), trying to heal divisions between the parties involved and hoping his neutrality would help keep the lines of communication open.

“I had people come up to me and say, ‘If you don’t take a stand on this, I’m not voting for you again,'” Hinds recalled. “When it’s a locally divisive issue, it can become very personal.”

But Hinds says he has continued undaunted, despite the fact that, “Every issue has five sides to it and they expect you to take a stand yesterday.”

It’s not that Hinds can’t handle conflict. After all, he studied international law and negotiation at Tufts University and he spent three-and-a-half years in Iraq, working for part of that time as a team leader of an UN-led negotiation between the Kurdistan region and the government of Iraq. But he is a deliberative person by nature and not one to make snap judgments when reason is called for.

“It has been really what I had hope it would be in terms of the ability to dive into local and regional issues while also dealing with very important statewide issues, particularly where Massachusetts can be a leader for the country,” Hinds said of his first year in office.

On the state level, Hinds has been very active in the area of criminal justice reform. In November he delivered the keynote address at a conference at Bard College at Simon’s Rock sponsored by the Osher Lifelong Learning Institute (OLLI) at Berkshire Community College.

Hinds spoke of his efforts on bail reform, recidivism and incarceration rates. Senate President Stan Rosenberg, D-Amherst, led the charge on the bill, which passed in Senate and is still making its way through the House. Rosenberg is on a leave of absence from his leadership post for reasons that will be explained later in this article.

Not long after being sworn in last January, Hinds landed a committee chairmanship tailored to his district: Senate chair of the Joint Committee on Tourism, Arts and Cultural Development. Fittingly, tourism is the third largest industry in both the Berkshires — and the state, for that matter.

Perhaps the most high-profile initiative that arose from that position was the so-called Berkshire Flyer, a passenger rail service that would connect New York City to the Berkshires via the Hudson Valley and Pittsfield.

Hinds formed a working group and called a meeting in Lenox in September after receiving approval from lawmakers to establish a working group to identify the benefits and challenges of establishing direct seasonal weekend passenger rail service.

The working group has met several times and has its share of supporters who insist it is the only viable route to the city and some detractors who maintain an informed skepticism about the project:

“I’m pleased with the direction it’s taken. We have very quickly started to identify a preferred route. I’m very happy the Department of Transportation has gone in with both feet, putting resources towards it. I’m very happy Amtrak is at the table actively participating in development and cost estimates and entry into Penn Station.” More meetings are planned early next year, he added, “so that I have marching orders as we head into budget season.”

Hinds is also Senate vice-chair of the Joint Committee on Economic Development & Emerging Technologies. Consequently, he has taken a keen interest in the availability of high-speed broadband into his district, which he also sees as a driver of economic development for the Berkshires and western Massachusetts.

He is particularly pleased that Gov. Charlie Baker recently signed a bond bill for $45 million, through the Massachusetts Broadband Institute’s “last-mile” project, to bring broadband into additional communities that are unserved.

About $15 million has been set aside for so-called “extra mile” funding, much of which will go to towns in Hinds’ district. Rosenberg, the Senate president who recently stepped down from his leadership post pending Senate and criminal investigations into sexual misconduct on the part of his husband, played a key role in securing the funds.

“I work closely with him,” Hinds said of Rosenberg. “This has been a serious blow for western Mass. because he’s from Amherst so he understands the importance of standing up for western Mass. He said, ‘If we’re going to do that [spend $45 million on broadband], then we need to continue our investments in high-speed internet for western Mass.’ I’m not sure any other Senate president would have done that.”

Hinds said it’s best for the parallel investigations — one by the Senate Ethics Committee and another reportedly by the FBI — to run their courses.

“It’s devastating on numerous fronts, for development and innovation of technology and our economy and especially for rural areas,” Hinds said. “Many towns have such limited options and there is a lack of investment in rural areas already. [The repeal of NN] is bad on its own, but even worse for rural areas.”

Attorney General Maura Healey agrees, and on Thursday announced that her office would file suit against the Federal Communications Commission’s decision to repeal net neutrality.

Another devastating blow, Hinds says, would be if the federal tax bill being hammered out in Congress eliminated the historic tax credit, a preservation tool that includes incentives for investors to redevelop and reuse historic buildings such as the old mills that dot the Berkshires. The tax bill passed by the House eliminated the HTC, while the Senate bill would trim it back.

A number of development projects in the Berkshires have used the HTC as an important component of the business model for redevelopment. One such example is the redevelopment by Jeffrey Cohen of the former Eagle Mill in Lee.

“When we talk about historic tax credits and the role they’ve played in essentially allowing for developers to take on market-rate housing, it’s been a key factor,” Hinds said. “And to see that disappear at a moment when a lot of our regional companies like General Dynamics are saying that, absent an influx of market-rate housing for some of their young engineers, they have trouble retaining the staff that they need. And so there are a lot of examples of [HTCs] being a key linchpin for economic development.”

Hinds is also interested in pressuring the state Department of Elementary and Secondary Education to increase education funding, especially for rural schools that face unique fiscal challenges, such as being overly dependent on homeowner property taxes, compared to their urban and suburban counterparts.

Along with his Democratic colleague, state Rep. William “Smitty” Pignatelli, D-Lenox, Hinds was one of 18 senators and representatives who signed a letter to Gov. Baker urging him to fully fund transportation costs to regional schools districts. That lack of promised funding has been a sore spot among regional school districts and its advocates for decades.

Hinds wasn’t shy about admitting to some disappointments in his first year. His attempt to create a “workforce alignment czar” to help link workers to businesses in the Berkshires was vetoed by Republican Baker as part of the budget process. So was a plan to provide emergency beds for homeless individuals during the winter months.

“To have them vetoed by the governor has been hugely discouraging,” Hinds said. “The legislature has overridden those but it’s still up to him to release those funds and so experiencing that as part of the process has been a big frustration.”

Perhaps his biggest disappointment has been an inability of lawmakers to put much of a dent in the devastating opioid addiction crisis that has gripped the Berkshires and the rest of the state. Hinds also sits on the Mental Health, Substance Abuse & Recovery Committee.

“There was a strategy put forward that included getting more Narcan in the hands of first responders and doing more around prescription monitoring for doctors and yet we’ve watched the numbers still increase in Massachusetts, and so to that effect it’s been hugely discouraging,” he said.

Finally, Hinds has watched in amazement the “trajectory that we are on in terms of divisiveness in the political space,” which he says is being driven at the national level. He pointed to economic displacement, income inequality and lack of social mobility as causes.

“These dynamics that lend themselves to a Trump,” he explained. “We increasingly have conflicts between groups as opposed to individuals. Identity groups are created and mobilized … It creates a dangerous dynamic built on fear. [Trump] was someone who came in and played on those insecurities.”

Indeed, Hinds is giving a TED talk in January in North Adams. He’s not absolutely certain what he’s going to talk about but says “it’s moving in this direction of politics in a divisive environment, and I have some ideas of how we should be doing politics differently.”

As for what he has learned about himself, Hinds says he’s well schooled now about the difference courage and thoughtfulness. Among other things, “It’s easy to yell, but it’s harder to roll up your sleeves.”

As for the groove of being a senator, “The pace is unending, its nonstop, every waking hour.”