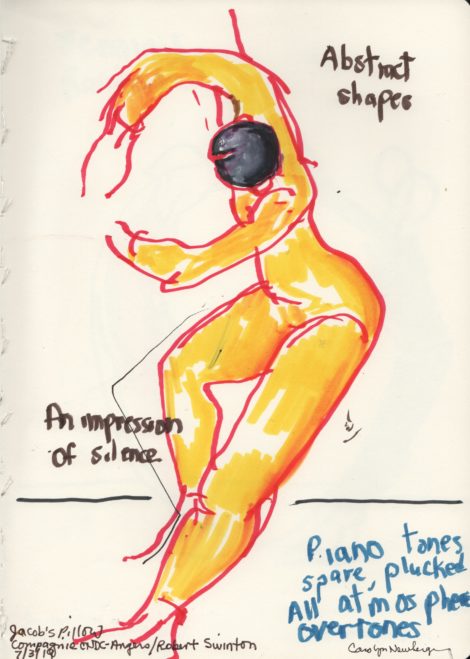 AT THE PILLOW: In celebration of the radical life and work of Merce Cunningham

One hundred years ago, on April 16, 1919, Merce Cunningham came into this world. Over the course of his long life (he died in 2009), Cunningham became one of the principal innovators of dance, disconnecting dance from storytelling told to music through a classical vocabulary of movement, to an artform as radical as abstract expressionism and 12-tone music. He innovated, experimented, searched for pure forms of basic elements, and created worlds where the elements of sound and motion operate independently, inviting the audience to discover their own meanings and connections, or just be immersed in his unfolding revelations.

The Merce Cunningham centennial is uniting dance companies and cultural and educational institutions around the globe in a celebration of his contributions. His connection to Jacob’s Pillow began in 1955—Cunningham’s first Jacob’s Pillow performance two years after forming his own company—and stretched into 2009, when he received the Jacob’s Pillow Dance Award. The Pillow is celebrating the centennial with performances, talks, and festival-long digital and film exhibitions in the Doris Duke Theatre and Blake’s Barn.

Last week’s program brought three of his iconic dances to the Pillow stage, performed by Compagnie CNDC-Angers/Robert Swinston from Angers, France. Mr. Swinston, a scholarship student in the School at Jacob’s Pillow in 1971, overlapping with Ted Shawn’s final year at the Pillow, joined the Merce Cunningham Company in 1983. He is now director of the Centre Nationale de Danse Contemporaine-Angers, based in France, which brings Cunningham’s legacy to audiences around the world.

The program began with gritty black-and-white footage from 1955 of Cunningham and his dancers in their first performance on the Ted Shawn stage. Their movements were unconventional. The music, which included Louis Moreau Gottschalk and John Cage, contained syncopations, dissonances and silences. The costumes were spare and monochromatic. This wasn’t dance as we knew it, those of us in our postwar suburbs on tree-lined streets. This was also the year that Rosa Parks refused to relinquish her seat on the Cleveland Avenue bus after a long day’s work in Montgomery, Alabama. The assumptions of pre- and post-war America were on the cusp of change.

The changes Merce Cunningham and Rosa Parks, among others, brought about might be characterized literally and figuratively as coloring outside the lines. The old rules that constrict freedom and expression, in their different ways, had to be challenged.

“Suite for 5” began as a solo suite for Merce Cunningham, as he explored the possibilities of body, movement, space and time, with additional dancers added over time. Set to the minimalist music by John Cage for prepared piano with dancers in simple earth-toned unitards, dances of one, two, three, four and five dancers seemed tranquil, natural, unhurried, and went forth in a space as palpable as the dancers within it. 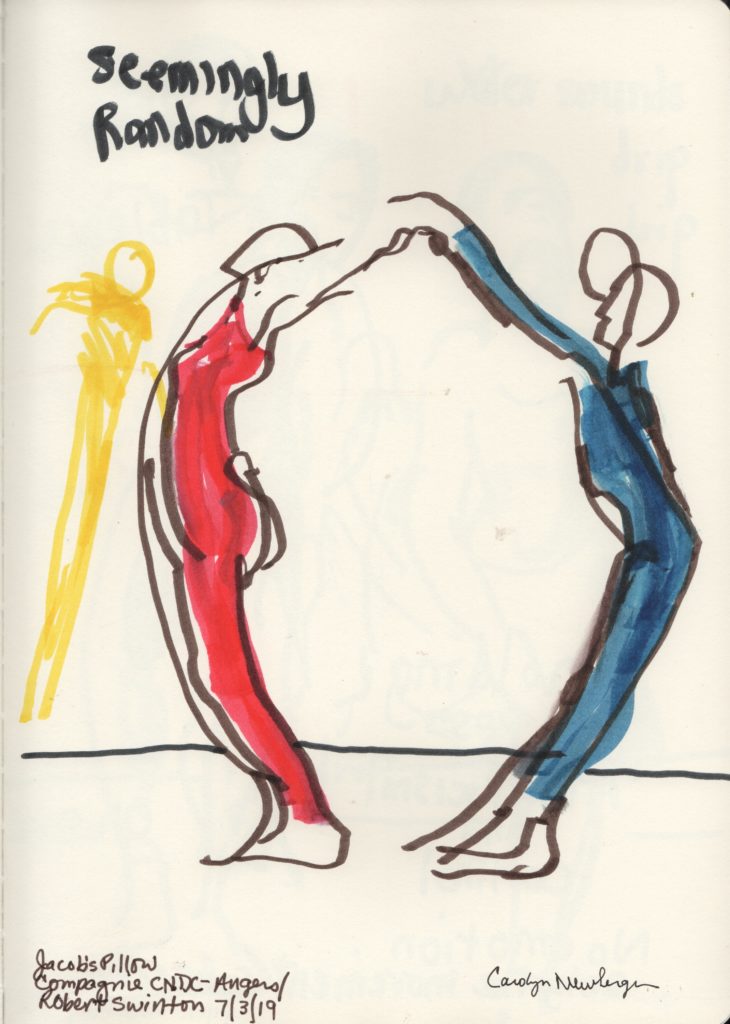 The program notes describe the first two dances as reflecting Cunningham’s deep love of nature, and one felt it. All of us were immersed in silence, dancers in proximity to each other, but profoundly occupying their own inner space as they explored with their bodies the outer space that they moved in. The piano’s tones, plucks and echoes exalted the tranquil enveloping atmosphere and framed their own emotions, as well.

Meditating in nature on a quiet day creates a similar kind of consciousness. With eyes closed and ears open, one hears myriad sounds one doesn’t hear when distracted by sight: leaves rustling; one bird calling here, another there; a scurrying in the underbrush; an acorn falling. With eyes open, one enters the world of tree shapes; bark, the colors of earth, sky and leaves; water glistening on rocks. Together they form one’s universe, with independent elements, yet, at the center, a sense of calm. 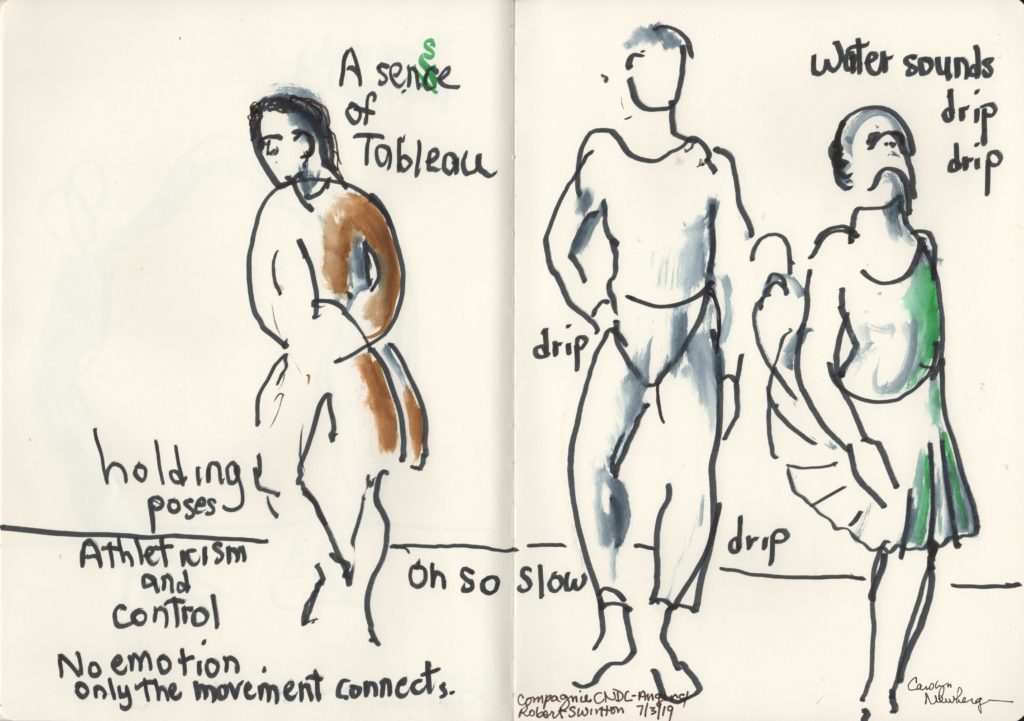 A sense of Tableau. Illustration by Carolyn Newberger

In “Inlets 2,” again inspired by Cunningham’s love of the climate and topography of his native Pacific Northwest, seven dancers moved from and into stillness, creating a sense of tableau flowing slowly. The steady drip-drip of water, created by three musicians turning conch shells of various sizes while holding them to microphones, evoked gentle rain, even as the dancers’ movements explored and penetrated a seemingly liquid space.

At the intermission, a lovely couple seated behind us asked, “Do you like this?” Regular Pillow-goers and lovers of dance, they did not. This question evoked a lively discussion as we sought to explain why we found it so thought-provoking and satisfying. Of course, modern dance or art or music challenge us out of our preconceptions of what dance, art, music and other arts are or should be. It requires us to expand our senses, in this case to integrate silence into sound and stillness into movement. It invites us not only to read between the lines, but also to give the between as much attention as the lines themselves. 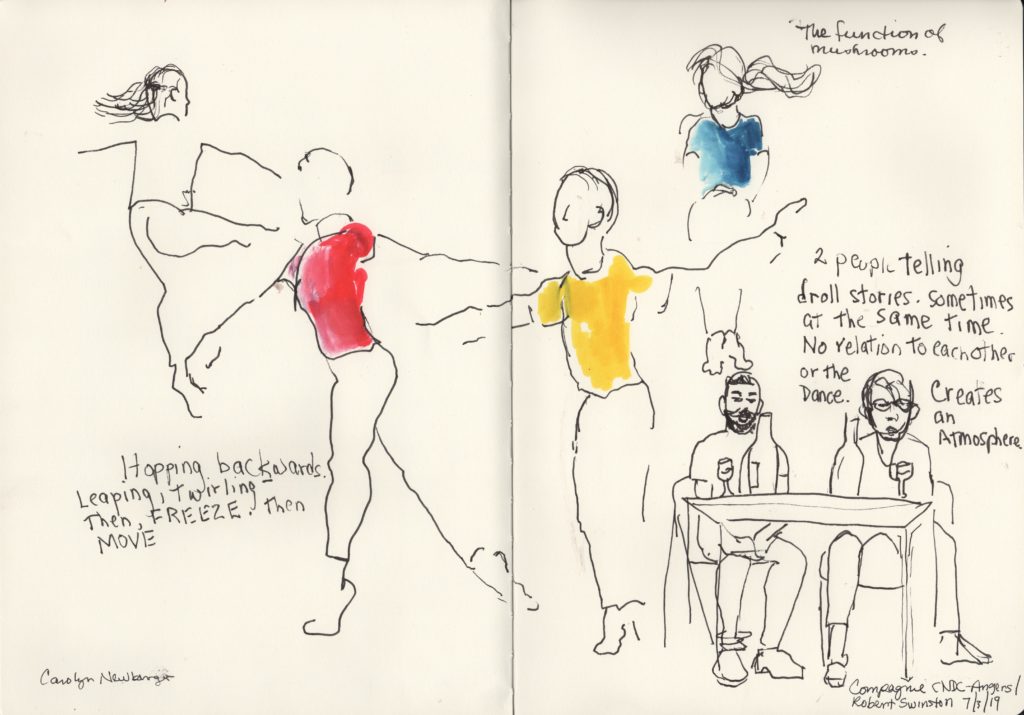 ‘How to Pass, Kick, Fall and Run.’ Illustration by Carolyn Newberger

After intermission we returned to a stage with a small table on the right, with water glasses and carafe, and old-fashioned radio microphones. Seated at the table were a man and a woman who began reading in calm, clear voices snippets of stories about all manner of things, many very funny, bearing, as far as we could tell, very little relation to each other or to the dance.

On the stage, the company’s seven dancers twirled, kicked, froze, unfroze, extended arms and legs in slow motion, and scampered like mice in a cornfield. We, the audience, were living in the moment of dancers and storytellers living in their own moments, and privileged to join them as they reached into ours.

— Emma Goldman
Read next: CONNECTIONS: Searching for the American Centinel