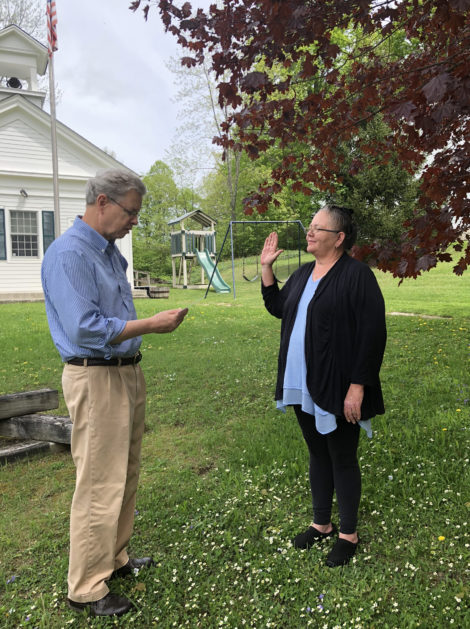 David Scribner
Alford Town Clerk Tom Curtin administers the oath of office to newly elected Select Board member Peggy Rae Mendon-Wilson during a ceremony Thursday (May 17) in front of the Town Offices.

In a first for Alford, a woman is elected to the Select Board

Alford –At 11:30 Thursday morning (May17) the rural Western Massachusetts town of Alford – population 494 – made history. On the lawn in front of the white clapboard town offices – once the Alford School – Town Clerk Tom Curtin, reading from the traditional declaration, administered the oath of office to Peggy Rae Hendon-Wilson, the first female to be elected to Alford’s Select Board.

“I feel really blessed to live here,” responded Hendon-Wilson, a Wisconsin-born horticulturalist who has lived in Alford for 30 years. Up the hill from the swearing-in ceremony stands the Alford Village Church, where she was married and where her daughter Sarah, now living in Montana, was baptized.

She owns Avalon Woods, a landscaping business, and teaches horticulture and environmental science for schools in the Southern Berkshire Regional School District. Her husband, Howard, is on the town’s Conservation Commission.

Hers was a write-in campaign, receiving 54 votes out of the 71 votes cast. There are 362 registered voters in Alford, a town where 50 percent of properties are in the hands of second-home owners, and where there is neither police department nor post office.

As for the low turnout for the May 15 annual town elections, town Treasurer, Tax Collector and Selectman’s Secretary Roxanne Germain observed: “It didn’t help there was a tornado warning.”

Germain explained that she had consulted her 80-year-old father about the historic nature of Hendo-Wilson’s election.

“He’s lived here his whole life, and he says she’s the first, as far as he knows,” she reported.

“The Alford Garden Club came through big time,” Hendon-Wilson said, by way of explaining her victory at the polls. She replaces Select Board member Ray Wilcox who declined to be nominated for another term.

“We have a lovely town,” Hendon-Wilson noted. “Everyone enjoys communicating together.” 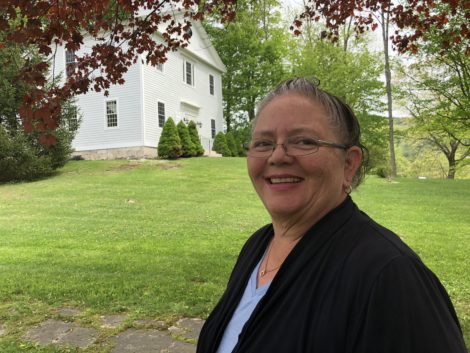 Communicating in Alford is about to become more high tech. By September 1, every resident in the town will have access to high-speed, broadband Internet, thanks to the community’s investment in fiber optic network. Currently, residents have neither DSL nor cable services.

And she added that Alford has a diverse population that includes farmers, artists, writers, physicians, lawyers, and even a Nobel laureate in the person of biophysicist Joachim Frank.

“Plus,” observed Town Clerk Curtin, “we have the lowest property tax rate in Berkshire County. $5.14 per thousand.”

Hendon-Wilson’s first meeting as a Select Board member will be June 11, when she will take her place at the table with current Select Board Chair Charles Ketchen and attorney Peter Puciloski, a second write-in candidate who replaces Tim Drumm who retired once his three years on the board were up.

“Sometimes, it’s really difficult to get people to run for office,” commented Curtin.

Now that Hendon-Wilson has broken the gender barrier, perhaps there could be more competition.