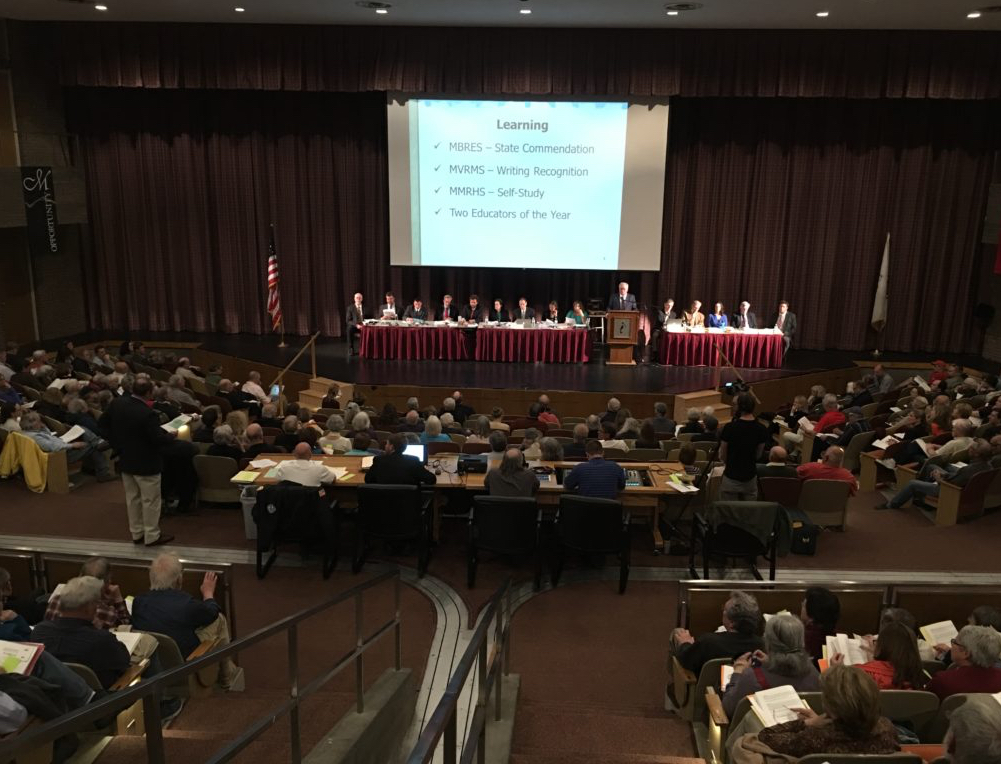 Great Barrington — Immigration, the school budget and zoning issues will headline the 28 articles on the warrant for tonight’s annual town meeting at 6 p.m. at Monument Mountain Regional High School.

The first article grew out of a statement drafted by the Selectboard and the Police Department last fall and adopted by the board. The department, the resolution said, “does not investigate civil immigration laws, as this role falls to the federal government. All of our residents should be completely confident that their local Police Department is here to assist them in a crisis situation.”

The town’s proposed policy says the Police Department will treat undocumented citizens like everyone else and will not be an arm of ICE (the federal Immigration and Customs Enforcement agency), while the citizens’ petition lays out a more detailed set of policies modeled after and modified from the American Civil Liberties Union (ACLU), Massachusetts Immigrant and Refugee Advocacy Coalition (MIRA) trust policies.

The latter proposed policy was drafted and filed by Gwendolyn VanSant, CEO and founding director of Multicultural BRIDGE, with partners Berkshire Showing Up for Racial Justice, Berkshire Interfaith Organizing, and Lia Spiliotes, chief executive officer at Community Health Programs (CHP). The policy would help prevent unwarranted detentions and problems when an undocumented resident comes into contact with law enforcement.

Earlier this year, both the Southern Berkshire and the Berkshire Hills regional school districts adopted like-minded policies as they pertain to their own campuses.

As for zoning, there are four items, only two of which are considered controversial. The first involves regulating solar energy systems. Currently, the town has no zoning bylaws that address the subject.

In an interview with The Edge, Town Planner Christopher Rembold said the lack of regulations could be interpreted to mean that since there are no express regulations on solar, then the systems are prohibited.

“It could be interpreted that the bylaw prohibits solar,” Rembold said. “We all know that in practice that has not been the case.”

Without any such regulations in place, the town was caught flat-footed earlier this year when a farmer on West Plain Road looking for supplementary income wanted to construct a large ground-mounted solar array on a dozen acres near the Rudolph Steiner School.

The proposed regulations would clarify much of what has become common practice, allowing ground mounted installations by-right in some zones and by special permit in others. Roof-mounted systems would be allowed by-right virtually everywhere in the town.

“The Planning Board has taken a middle ground,” Rembold explained. “Rather than prohibit solar everywhere, the board recognizes that clean energy is a good thing. If homeowners and business owners can diversify their income streams, that’s a good thing.”

The other proposed zoning bylaw involves the designation of portions of the town as part of a so-called “smart growth overlay district.” Rembold says it would allow the town to be more proactive and encourage the development of existing buildings and properties. The district would also give the town better tools to deal with applications under the state’s comprehensive permit law for affordable housing, known as 40B.

“The underlying zoning does not change,” Rembold said. “We are proactively saying this is where we want redevelopment and affordable housing.”

And there are two major spending packages to vote on. The town’s proposed operating budget clocks in at a little more than $11.1 million, a 1.99 percent increase over last year. The proposed capital budget anticipates spending almost $4.2 million on capital projects, of which $1,176,400 is expected in grants, state funds and CPA. The remaining $3,010,000 will be funded in bonds.

Meanwhile, Great Barrington’s share of the proposed Berkshire Hills Regional School District budget is more than $15.3 million, for an increase of almost 6 percent in the assessment over last year.

Also on the warrant is an article, sponsored by former Finance Committee Chairperson Sharon Gregory calling for the creation of “a formal delegation of school committee members, town officials and citizens to open discussion with other school districts and towns to create an expanded regional high school.”

In addition, there are eight items on the warrant for voters to approve or reject relating to proposed grants to the town and various organizations from the Community Preservation Act. Click here  for a list and analysis.

The annual town meeting is slated to begin at 6 p.m. in the Monument Mountain Regional High School auditorium. A special meeting of the Select Board is scheduled for 5:30 p.m. in the high school library to discuss a draft request for proposals for the reuse of the Housatonic Elementary School.