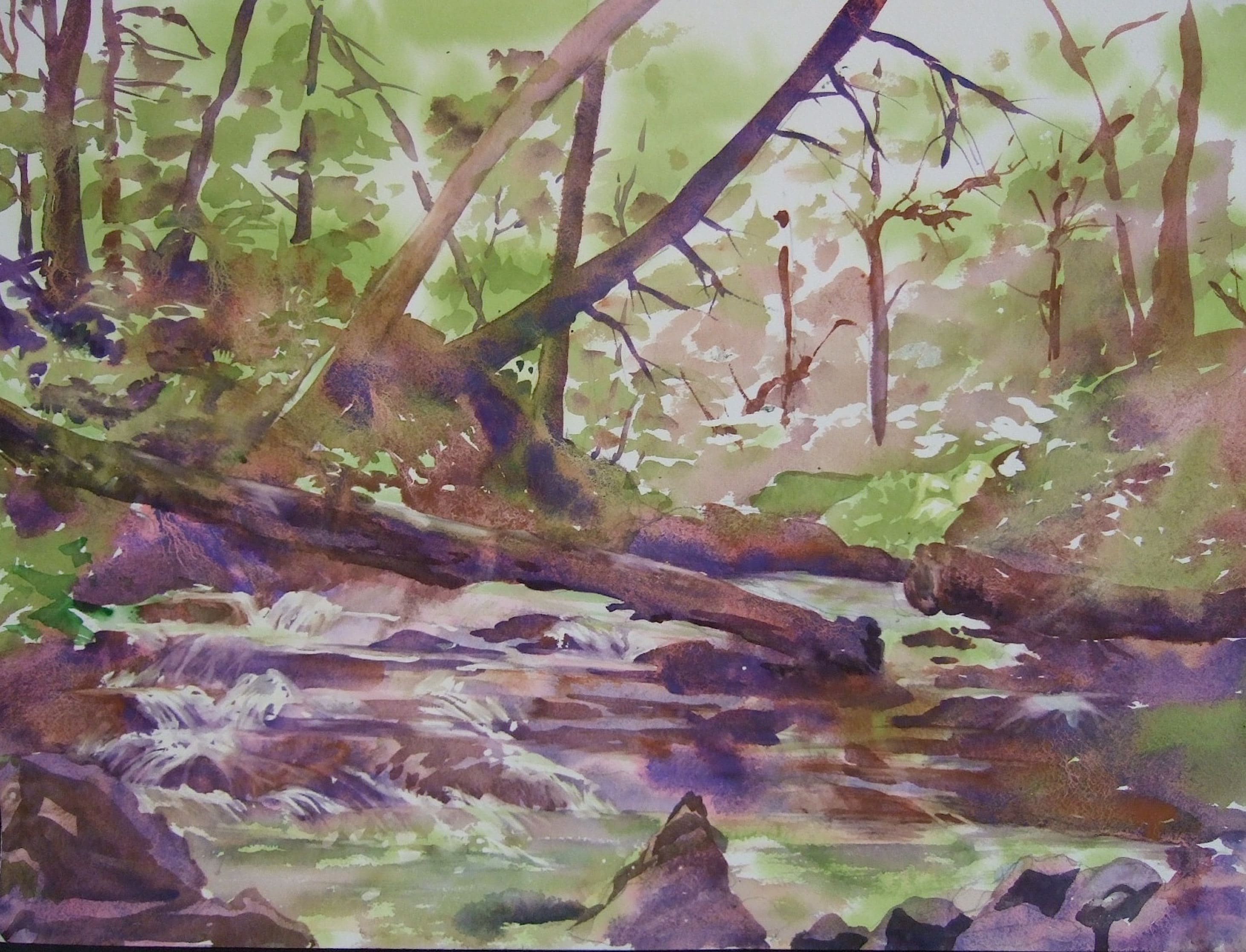 This spring, I have written several stories in The Berkshire Edge about finding treasures and pleasures in the Berkshire forest. These writings are a continuation of a year spent painting and writing in and about the forest, inspired by Lily, the small dog my husband, Eli and I adopted about a year ago. Over the coming months, I will share Lily and my adventures in the forest with you, my dear Berkshire Edge readers.

Treasure in the Berkshire Woods

We live on a quiet country road. Very few cars pass by on a given day, but when they do, well, they’re hell-bent getting to nowhere. Our little dog, Lily, rescued a little more than a year ago at age two from her sweet owner rejoining her military husband across the country, will now swim across oceans and leap across mountains to be with us, her doting and elderly new owners.

One night last spring we returned from dinner out to find Lily on the road, 15 pounds of easy prey to the bobcats and coyotes that share our neighborhood. We sealed off the doggie door, but still our Lily managed to get out, and once out found her way to us as we unloaded our car by the road, or raced to join our neighbor Mike’s Westie, Finley, as they walked past our house. Something had to be done.

So we called the invisible fence company, and in no time at all, they buried a wire between our property and the road, all the way from the brook bordering our house, up the road and across the entrance to a driveway leading to a back cabin at the property’s edge. Then the invisible fence folks placed little white flags all along this stretch of road and fitted Lily with a bright red collar sporting a small gray box with two electrodes protruding onto her neck.

For the moment, the collar was inactive. Meanwhile, my job was to train Lily to recognize that the flags were warning signs saying, “Don’t even think about going here.” I should mention here that I have tended to be the earlier riser in our marriage. For dogs and babies I rise reluctantly but willingly in the morning hours when called. Lily calls like clockwork. Between 6:30 and 7 a.m. she comes sniffing and whining to the bed. Sometimes after one or the other of us feeds her she will go back to her bed and buy a little snooze time, but by 7:30 it’s arise and shine, no kidding and no excuses.

So up I would get and out we would go. Early mornings last June, Lily and I ventured onto our property with a 15-foot leash issued by Invisible Fence so that I could pull Lily back from the forbidden edge again, and again, and again.

Suffice it to say, I was a diligent dog mommy. Lily seemed pretty much to get it, being the eager to please little doggie that she is, and in due time, the Invisible Fence trainer came back for a follow up visit, turned on the juice, and allowed Lily to be “corrected” so that she would know the consequences of transgressions. She had a couple more “corrections,” to my horror, and probably to her benefit, and that was that.

Meanwhile, Lily and I discovered the big, messy, seething forest that lies behind the few houses that dot our road. I’m talking about hundreds of acres of forest connected to thousands and hundreds of thousands of acres of forest stretching northward through Vermont, into Canada, beyond the Yukon, and clear to the North Pole. For Lily and me, this vast wilderness begins in our small patch of the universe, where a turbulent brook runs northward alongside our two cabins, with a rough path on its bank and the wild and mysterious forest beyond.

Some time ago, before Lily, I began to venture into this forest, discovering a wide path, cut years ago by the elder Mr. Coakley who lives at the far end, so that he could hitch up his horse and take friends and family on buggy rides through the woods. During the past few years I have discovered patches of ramps, wild leeks, pushing their spatulate leaves up through the leaf litter every spring; and fiddleheads on a hillside over a berm, sloping into the brook. But I’ve always been an outsider, venturing into the woods as a tourist in search of souvenirs.

Not so with Lily. Lily is a forest creature, a mix of something like mini pinscher, Chihuahua and/or dachshund; in other words, a creature born to sniff out small rodents in tight places, leap through trees and brush in pursuit of a squirrel, fly six feet into the air to snap after a butterfly, and nose to the ground, trace a scent for half a mile. Thanks to our invisible fence training along the southern border of our property, we ventured to the edge of the woods where it approached the road, and it soon became clear that for Lily, the edge was only the beginning.

So since then, after Lily roots me out of bed with a nose to my elbow, and after I suit up in my insect shield clothing, we take off into the woods. I find that I can wrap Lily’s 15-foot leash around small trees and rappel myself down embankments; that with a hiking pole, I can climb steep hillsides; that with a bear bell tucked into the back mesh pocket of my fishing vest I can follow comfortably an unknown track deep into the woods.

Two days after plunging into the forest with Lily, I spied a nine-inch tall golden cylinder with a fissured black cap emerging from the ground, glowing translucent in the morning sunlight. A giant morel! I carefully cut it from the ground, almost crumbling into a handy (and clean) doggy poop bag and raced it back to the kitchen to fry up for breakfast. The next day I found another, the head broken off beside it, the golden shaft, maybe three inches in diameter, still soft and fresh. These morel fragments joined domesticated mushroom brethren in crêpes for dinner.

So having found treasure, I kept looking for more. And what I have discovered is treasure all around me. Fungi growing from trees in clouds of red on white stalks, giant scalloped shelves, ladders of small white crescents scaling the wizened trunks of oaks, mini worlds of lichens and stones, trees that speak to me, mosses of inexpressible softness, punctuated by sprigs of miniature pines, hidden grottos, a universe of worlds within worlds. And I am there. I inhabit these worlds. I lay my ear on the bark of an enormous tree and listen.

In our house, formerly an old fishing cabin, we’ve built a room with a glass wall of window that slides open, like an accordion. With the screen down, we look out over our little lake into the green treetops. We hear the brook and the birds. We feel grateful for our home and our health and for each other, and for the beauty around us. But in our home we are observing nature, not in it. Like Grand Canyon visitors standing on a glass platform, we are awestruck but safe, admiring but not part of what we see. In the woods I feel part of nature. Bear bell and insect shield clothing notwithstanding, I am a creature in the forest, as Lily is a creature in the forest, up close and embedded in its thrumming, decaying, regenerating power.