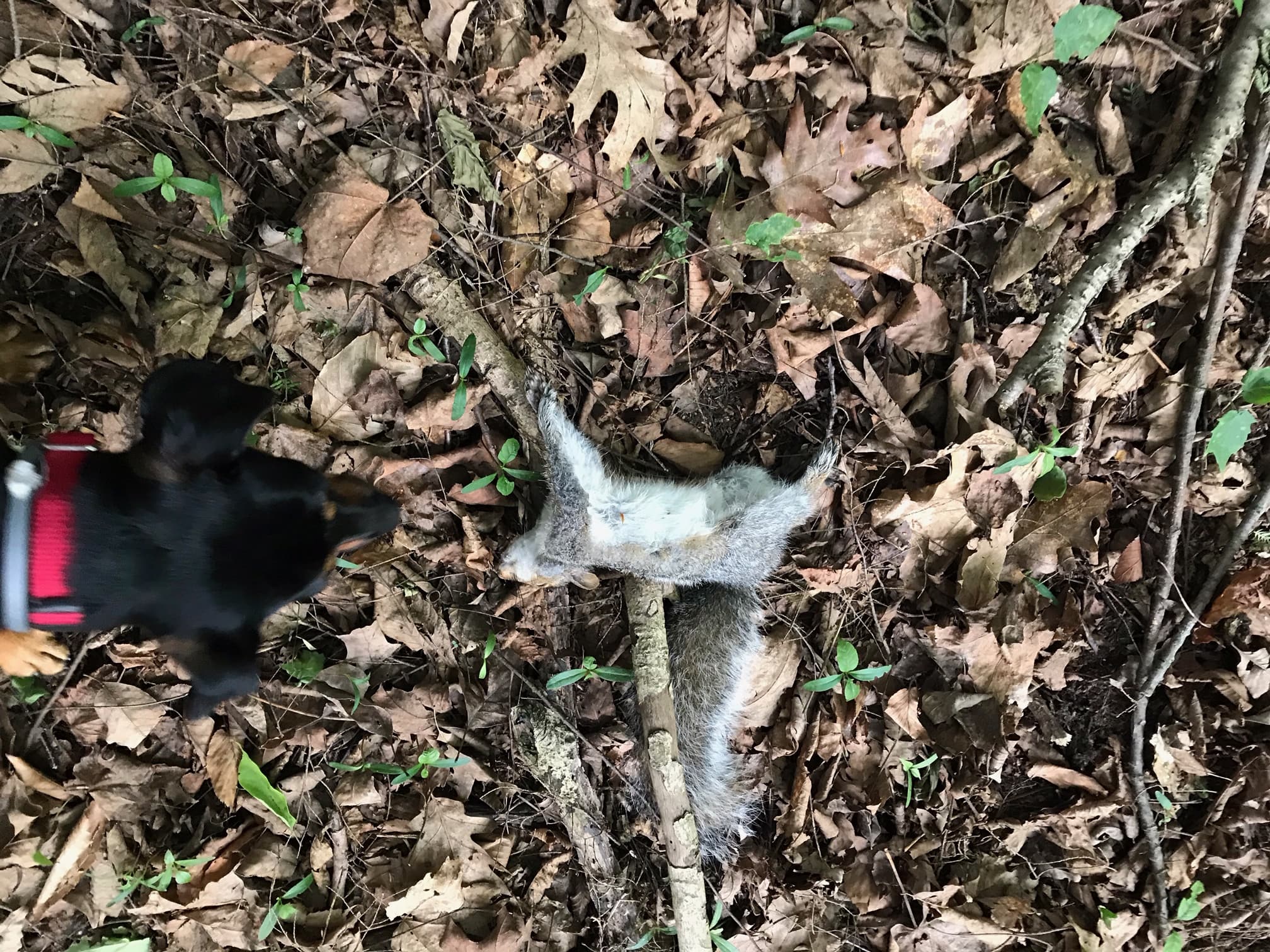 This is the sixth installment in a series. Also available are Chapter 1, Chapter 2, Chapter 3, Chapter 4 and Chapter 5.

In the forest, death is everywhere. The floor is blanketed with fallen trees, fallen limbs, fallen leaves, decaying and decayed stumps and, if one looks hard enough, the remains of dead birds, stiffened mice and beetle carcasses caught in spiders’ webs.

I see death by strangulation, and death by evisceration. A tall, slim beech tree leaning into its neighbor is encircled by a serpent of thick vine, itself strangled by a slimmer vine.

One old lady of a tree miraculously pushes out a living canopy 50 feet above a hollow trunk with charred slashes and gaping holes through which I can see the light of the morning sun. She is a victim but not a casualty of a lightening strike. The edges of the wound, thickened with time and the scars of healing, form an archway through which I can enter her interior, where I listen for sounds of juices that still flow.

Trees fall into each other’s arms in a mutual embrace. They tear through each other’s bodies, crashing to a double death, Romeo and Juliet, or murder-suicide.

I recently learned that my new friend Linda emerged as a young woman from a near-death experience, able to talk with dogs and a champion of death. Now I would love to know what is on Lily’s mind when she bolts to the window barking furiously at what I can’t see or hear—or even whether she likes her kibble, which she sometimes seems to peck at reluctantly. But, no disrespect to Lily, I’m more interested in how my friend can be a champion of death.

You see, I am afraid of death. I learned this when I was a freshman at Sarah Lawrence College and I found myself in a car with a friend of a friend who looked at me and pronounced: “You’re afraid of death.” Taken a bit by surprise—after all, this was the ‘60s, not the ‘70s, when such abnormal proclamations would seem more normal—I knew that she was right, not that, at age 18, I had thought about death that much.

I had grown up in a world stripped of death. I hadn’t even been to a funeral! When my grandparents died, we children were made happy so that we wouldn’t be sad. We didn’t attend their funerals but were left with babysitters who gave us special treats. Death wasn’t mentioned. We just knew vaguely that we wouldn’t be seeing Grandpa any more, but since Grandpa lived in Florida and we lived in Pittsburgh, we didn’t see much of Grandpa anyway.

Over the next four years, Grandma appeared for a few weeks during the summer until she, too, disappeared. By this time I was old enough to know what dead meant. I even knew that she died of a stroke, a killer of old people.

But my grandmother didn’t speak English. She was a quiet specter seated in her chair, or helping my mother in the kitchen while they spoke in the language my parents used when they didn’t want us to know what they were talking about—things like “Luzim tsuree, Yussel,” (Leave them alone, Joe) when my dad’s patience with his children wore thin at the breakfast nook dinner table.

My legacy from my maternal grandmother is her seven-layered strudel; cold borscht; knocking on wood; and the expression “Kenahora,” which she would utter whenever my mother would praise one of us in my grandmother’s presence. This roughly translates, as I understand, to, “Don’t take too much credit; this is God’s doing.”

And while we’re on the subject, from my other grandmother I inherited a recipe for killer latkes consisting of three ingredients (once, my mother figured out the ingredient she left out, so that my father’s wife’s latkes wouldn’t be as good as his mother’s latkes): grated potatoes, grated onions, flour and water, plus some salt and pepper. Fry in oil and voilà!

But I digress: Back to death.

I grew up in the suburbs. The iconography of the suburbs is the lawn. Lawns keep grass young. Whatever their yearnings for reproduction, such yearnings are forever dashed by the mower’s blades. Chemical agents keep grasses lush and pubescent, slumbering in winter and emerging in spring to another cycle of youth.

Even in the Berkshires, where plots are measured in acres rather than square feet, I see houses set in frames of green lawn, tended by owners on lawn-cutting tractors.

The lawns seem to be proclaiming, “I am order. I am control. I am a death-free zone.”

In the suburbs, trees are trimmed of dead branches, plantings are mulched, weeds are expunged. Flowers are “dead-headed.” Think about that!

Even parks, where city dwellers retreat to experience nature, are all too often larger lawns canopied by mature, carefully placed, solitary trees. What isn’t lawn, trimmed tree or mulched garden is covered over with materials impenetrable to the plant world: asphalt for cars to ride on, concrete for people to walk on, holes in the ground surrounded by cement and topped by brick or wooden boxes for people to live in.

So how in the world is a suburban girl to learn about death?

When we first came to the Berkshires, I was struck by the messiness of the woods. All manner of vegetation large and small was lying helter-skelter like pick-up sticks all over the forest floor. I realized that the natural state of nature is disorder. And as I’m walking these mornings in the woods, I’m seeing seemingly infinite varieties of disorder and the many ages of death, from new death with bright, new splintered wood to middle ages of decay to the messy carpetings and calcified barnacles of old death. And through it all, I see the increasingly assertive pulsings and strivings of new life: tender shoots, miniature pines, unfurling ferns pushing from, nourished by, the richness of decay: a celebration of death.