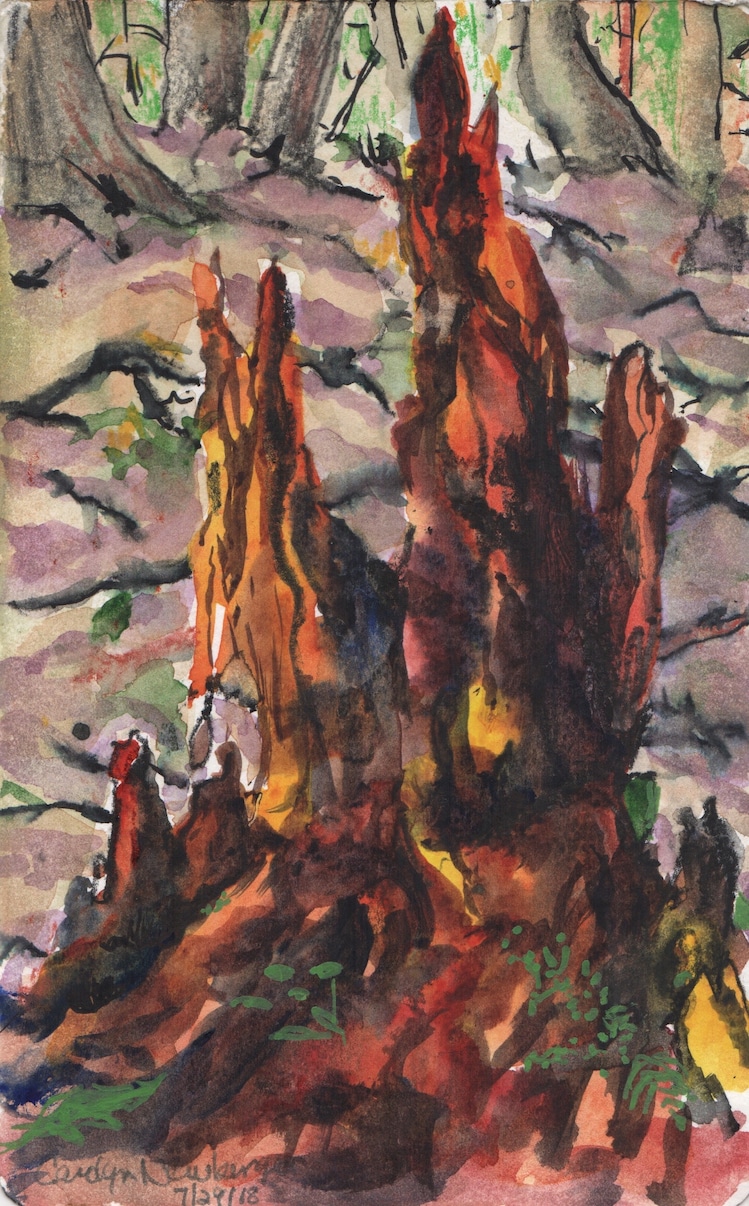 'Everything is Interesting,' watercolor by Carolyn Newberger

As I walk through the forest, my vision sometimes shifts from the fullness of the forest to eye-catching features of trees and stumps, and then back from the details to the forest as a whole. What I see depends on my perspective: near versus far, narrow versus wide, detail versus the bigger picture.

I’m reminded of the image that can be seen either as two faces or one vase.* If one sees the faces, it’s difficult to see the vase at the same time and vice versa. To move from one view to the other requires a perceptual shift, and perceptual shifts are jarring. We can get stuck in our usual way of viewing things.

One of the blessings of the forest is that it is alive with new things to see, both near and far, if only we keep our eyes open.

Take trees, for example. When we think of forests, we tend to imagine masses of trees with upright trunks and fulsome canopies. In the real forest, though, especially if we allow our cognitive lens to shift from the more distant view to the trees around us, we find trees at every angle from horizontal to vertical, from twisted to straight, from alive to dead and everything in between.

Yesterday, in the tangled massing of the woods beside the trail, my eye spied a small tree with a curving trunk that stood out like an elegant piece of sculpture in a park. It suggested to me a child finding its way in the world, so I named it “Finding the way.”

As I continued, I found more tree sculptures in the forest, each evoking a feeling or meaning. I only had to shift my focus from the general “tromping through the woods” perspective to the specific “I’m looking for trees that speak to me” perspective. In other words, I needed to know what I was looking for.

These sculptural wonders, though, also need the forest to sustain them. The sun, wind, earth, water and community all make possible each individual expression of specialness. By toggling my vision from the forest as a system to the particulars of its elements, I am coming to a deeper understanding of the forest.

Perhaps this is too great a leap, but I believe that a similar flexibility of view is happening more broadly in our country today: a realization of the critical importance of holding two perspectives simultaneously, that of the individual and of the system, especially as it pertains to racial, ethnic and social justice.

We, too, are like a forest. Sometimes the trees obscure the forest, but so, too, the forest can obscure the trees. We need the cognitive flexibility to see it all and the moral will to do something about it.

* The faces-vase image is best known from the study of perception by Edgar Rubin, an early 20th-century Danish psychologist. This image influenced Gestalt psychology, sometimes referred to as “holism,” that posits that the whole of anything is greater than its parts and is in a process of dynamic interaction. For more, the Gestalt Institute of Cleveland provides a succinct introduction to Gestalt psychology.