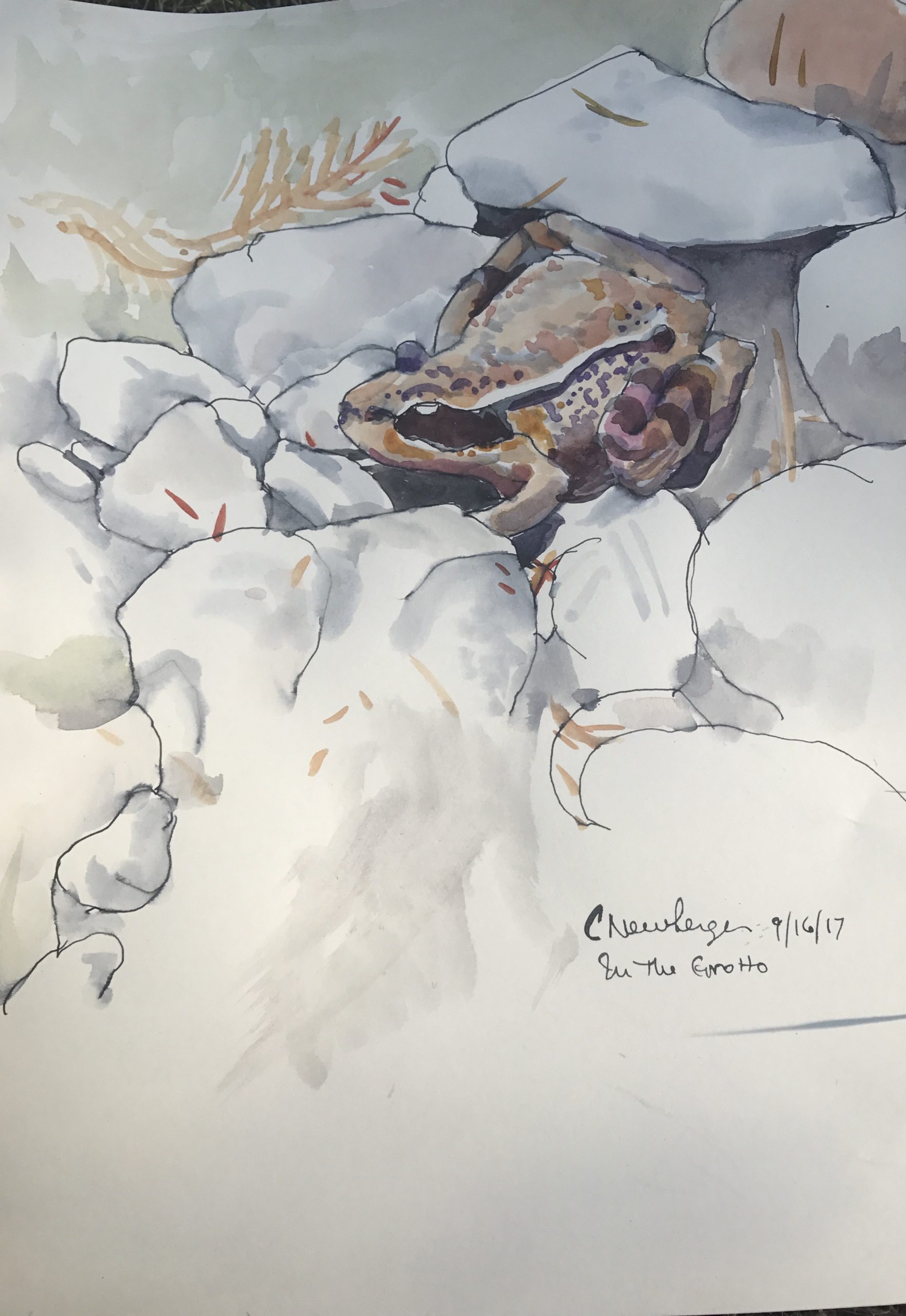 A frog In the grotto. Painting by Carolyn Newberger

We are living in a moment where some lives feel as though time has slowed to a crawl, while others must feel that time is careening at warp speed. For those of us sequestered in our homes, time passes slowly. For those separated from critically ill loved ones struggling for air in hospital beds, time must pass more slowly still. Those on the front lines in those overburdened hospitals must feel as though time is speeding by as they race to take care of their patients or to get their urgently needed supplies.

In nature, though, time unfolds at its own pace (though global warming is affecting that as well). Walking in the forest during this crisis can provide a kind of correction for our situation-driven extensions and compressions of time.

Take beavers and frogs, for example.

Last week, a sleek, lively, young beaver found a nice niche under a bush at the side of our small lake. As soon as Lily came barking and we stood up to look, he bounded into the water with a slap of his tail, circled inquisitively and finally returned unperturbed. To our relief, it seemed that he had left to search for a better place to make his new home.

Then, two days ago, alerted again by Lily, I saw a large, furry body in the same recess under the bush, bigger than before. This furry body didn’t leap into the water at Lily’s barking like the earlier beaver, but curled into a tighter ball, pressing its face into the cavity of earth. At first, I didn’t know that it was a beaver until it showed its blunt and solid face.

My grandson and husband came down to check. The beaver seemed to be aware of us, but lethargic. It would open its eyes a bit, maybe press its head further into the niche, then roll on its side, head clearly visible, eyes closed. We worried: Is this beaver sick?

A few minutes later, as I circled on the bank close above the beaver, it dropped into the water and swam rather lazily across to the other bank where it found another hollow to curl up in and, it was now evident, to snooze.

A little research in our beaver books gave us an explanation. Young beavers leave the lodge at two years to find a mate and create a new home where they will have kits the following spring. That was our first beaver. A year later, when the female is due to give birth, the male usually leaves the lodge for a few days and returns after the kits are born. Our guess is that our second guest is a mature beaver taking a reverse paternity leave and will be gone in a few days. We shall see. Another possibility is that we are the guests and that our beaver has plans to stay.

The frogs also have their spring timetable, and to our joy and amazement, that time is now. Descending from Balance Rock to the beaver pond in Kennedy Park this morning, we heard a din of honking as we approached the pond. We thought it might be a flock of Canada geese flying overhead. We stood by the pond, gazing into the blue sky, but could see no geese. Then we realized that the sound came from below, from the pond, and there they were: hundreds of frogs floating and darting on the surface of the water, croaking their hearts out. And they were LOUD! They have just emerged from hibernation, and the males are serenading the females, full of spawn just waiting for fertilization. Here is a YouTube link to a video that I took at the pond.

This was so magical, so marvelous, that we had to tear ourselves away. A chorus of frogs emerging from the mud in spring reminded us to pay attention to what we have, to be grateful for the beauty frogs and beavers bring into our lives, and to cherish the moments when we, too, can emerge from the mud and sing.