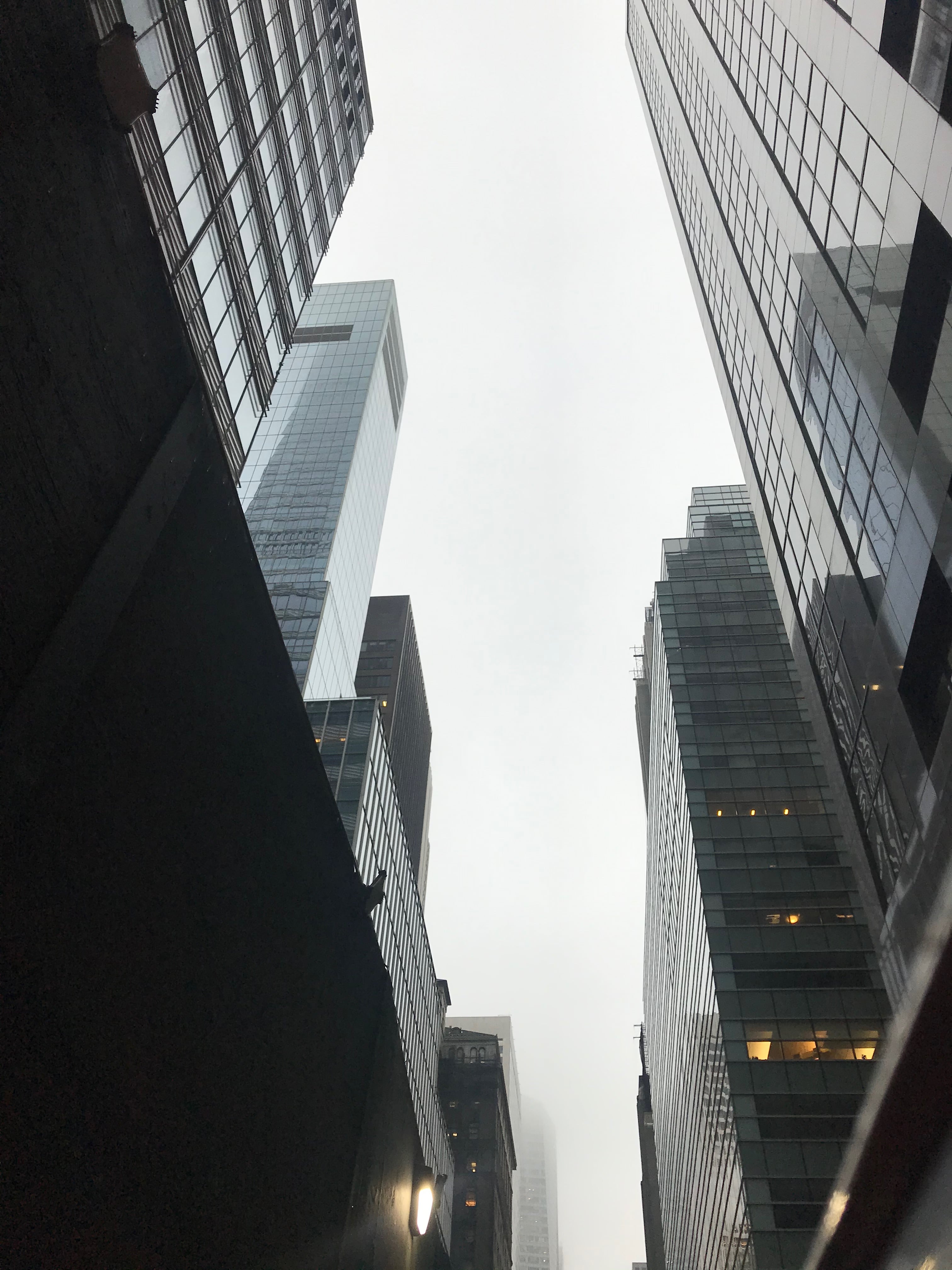 We’re in New York City for a few days of music and museums. As we rode uptown from Penn Station to our hotel, I gazed upward through the taxi skylight at the sharp staccato rhythm of glass and steel skyscrapers. Then, as we slowed for the light, that rhythm was punctuated by a grand old building of maybe a century gone by.

My eye traveled more slowly up the soft gray-brown stone, stopping at a band of deeply carved cornices and then rounding upward to a colonnade of arched windows. My eye angled to the right to follow the scalloped windows, resting in their horizontality, before continuing upward over another band of deeply carved balls and darts and then, more slowly over stone than glass and steel, upward as far as my eye and the dimensions of the taxi’s moon roof could take me.

Once settled, we did as one is wont to do in this great city: We set out to walk the streets from one site to the next. Here all is order. The eye travels in straight lines and right angles. Streets run north and south, east and west. On most streets, traffic runs in only one direction. Fifth Avenue traffic runs downtown; Sixth Avenue runs uptown. Traffic on even-numbered cross streets goes east while, on odd-numbered streets, travels west. Everybody seems to know the rules, and yet, even within those rules, everyone is jockeying for advantage. The traffic doesn’t flow but beeps and weaves, darts and starts and stops. The visual order vibrates within its confines.

Even the trees are ordered. Along the sidewalks, trees grow through collars in shiny-filigreed brass plates inserted into the concrete in neat, evenly placed squares. There is no syncopation for the trees. Each grows equidistant from each other, in shouting distance, perhaps, but unable to touch. Can you imagine living in shouting distance but unable to touch? Sometimes the young trunks strain within their confines, oozing over the collars with no more room to grow. What will happen to these lonely and strangling trees? Are they like racehorses that are past their prime in young adulthood? There are no pastures for these trees to retire to. Will they simply die young or be chopped down, collateral damage to a great city’s imperative of order?

In the city, as well as in the disorderly landscape of the forest, everyone is in search of opportunity. We look out our 11th-floor hotel window into the opposing windows of an office building. Through each window we see an identical desk with a flickering computer screen and a lone worker busily typing on his or her keypad. Like an Edward Hopper painting, we are entering into their daily world while they, oblivious to our eyes, pursue their dreams and their possibilities in the cold and thrumming city ecosystem.

We, too, seize our opportunity here. We consult Yelp for a good restaurant near Lincoln Center. On the train from Boston, we found last-minute tickets to “La Traviata” at the Met. There we discovered that Dmytro Popov, who sings Alfredo, the male lead, is sick and being replaced by a young Korean understudy, Won Whi Choy. This will be Choy’s Met debut. He sings gloriously and is met with rapturous shouts and applause by the audience. We hope that this accident of opportunity will launch him into a great career.

Even as in the forest, where roots carve their paths through rock and earth, limbs and leaves reach for the nourishment of the sky, beetles scurry, birds and squirrels seek nooks and crannies for their nests and burrows, the cityscape is teeming with yearning, scurrying life seeking opportunities of their own.