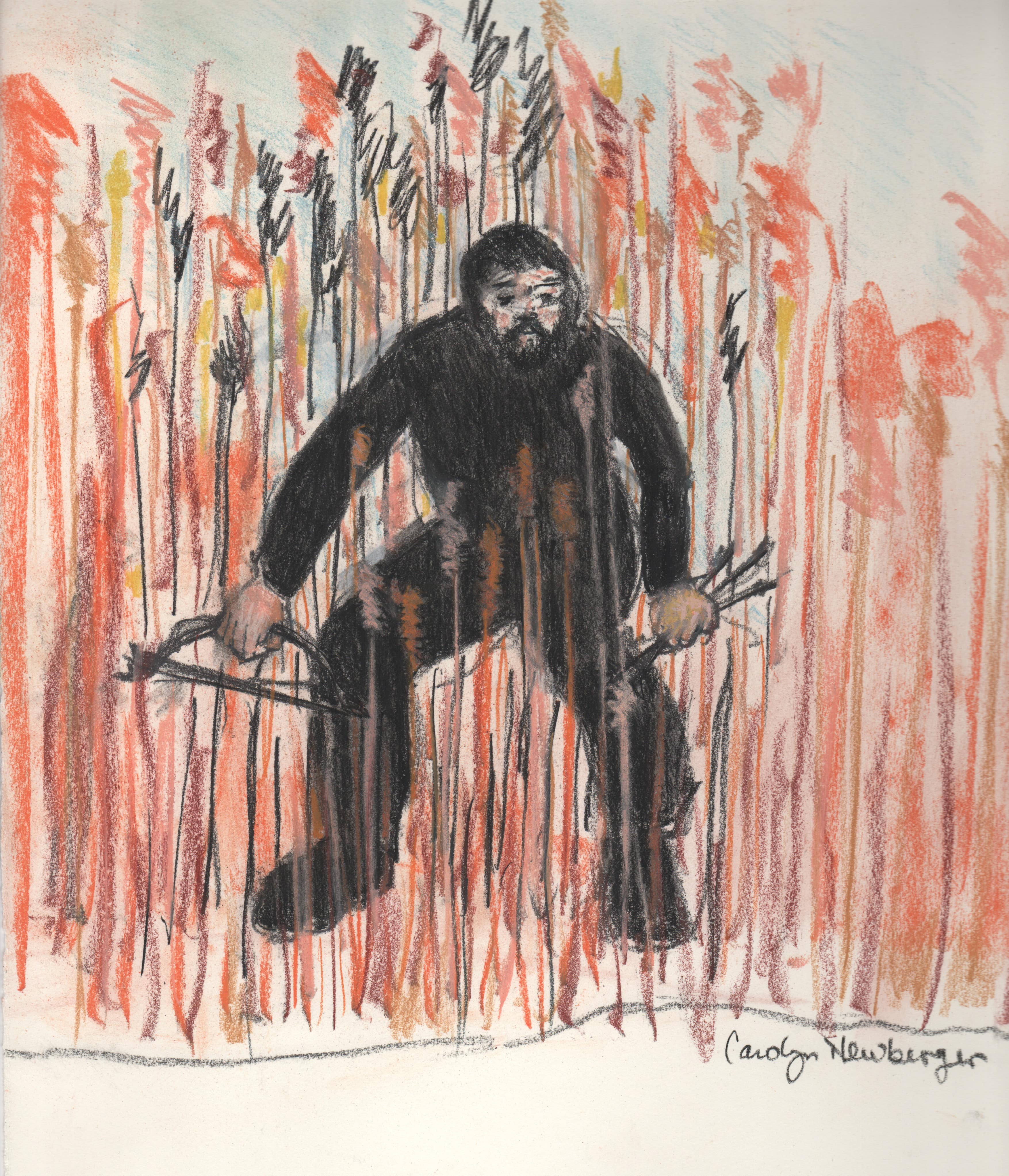 Bow and arrow hunter in the grasses. Drawing by Carolyn Newberger

Last fall, my neighbor alerted me to the Mass Wildlife website, which announces the rules and calendar of the two-month-long hunting season. He was worried about Lily and my safety if we were to go into the woods behind our home, which is full of deer and is a favorite hunting ground for my hunting neighbors and their families.

Bow and arrow season is through November. Then comes rifle season during the first two weeks of December, followed by two weeks during which only what are called primitive firearms are used. A few special days are also set aside for youth and paraplegic deer hunting. Bear, crows, turkeys and ruffed grouse all have their seasons, while coyotes are fair game at any time.

I have a complicated relationship with hunting. Several members of my family enjoy a good steak. My son-in-law gratefully replaced the brittle head on his African drum with a hide from my neighbor’s kill. In Africa, drummers use gazelle, shot, skinned and eaten with cultural and culinary purpose. Here in the Berkshires, my neighbors’ ancestors have been hunting on these lands for generations. So I need to examine my preconceptions about hunting.

The city me pictured hunters as rough men in pick-up trucks, gun rack visible in the rear window. In the country, most of my neighbors have pick-up trucks. None have visible gun racks, though many hunt.

Last season at the beginning of November, I decided that, for the bow and arrow season, I could walk in the forest with Lily, thinking that I would stay along the brook, where the trees are thick and deer hunting would be less likely. I had been assured that bow and arrow hunters need to be close to the deer to take a shot, and would not mistake Lily and me for a deer. I wore my hunter’s bright orange watch cap and strapped Lily into a blaze orange vest.

About 7:30 in the morning, the day was crisp and sunny, yet in the woods, I felt a bit resentful. Here we were in the heart of late autumn, Lily snuffing and bounding, the darkened turkey tail fungi ringed with brilliant white edges, the brook swirling and tumbling with red and brown leaves. Yet all this was soon, and maybe even now, not safe for me. By January, when hunting would be over, winter would be fully here and the ground would be thick with snow too deep for Lily. It might be months before we could go back.

Ahead of me, farther down the brook, Lily started barking furiously. I saw something large and black bounding across the water and into the high grasses on the other side. What was this? A bear? A black deer? Are there black deer?

Lily wouldn’t stop barking. She faced the grasses and barked and barked while I scanned the terrain to see what she was barking at. Suddenly, a bearded man rose up from the grasses about 100 yards away. I was alone in the forest except for a 17-pound barking dog. My hair stood on end.

I could turn and flee, or I could wait and meet this man striding toward me, clad in black with hunting bows and arrows in a carrier by his side. I decided to stay and raised my arm in a wide wave. He waved back, reached the brook and waded over, like Poseidon emerging from the sea. We introduced ourselves. The fiancé of a neighbor’s daughter, he wanted to assure me of our safety when he realized that we had seen him.

Sometime after that encounter, toward the end of the bow and arrow season, I met my neighbor of the deer hide on another walk in the woods. He led me to his deer chair, which he ratchets up a tree beside a deer path through the forest. He told me how he enjoys spending hours in that chair, watching the life of the forest passing beneath and above him, including the occasional bobcat and, of course, the occasional deer.

This beloved neighbor has given us gifts of venison steak, which I prepare lovingly for the meat eaters in my family. Sometimes I will find a bag of hen of the woods mushrooms hanging on our front doorknob, treasure from the woods near the house where he grew up. I am thankful to this neighbor, both for the bounty that he so generously shares, and for enlarging my understanding and appreciation.