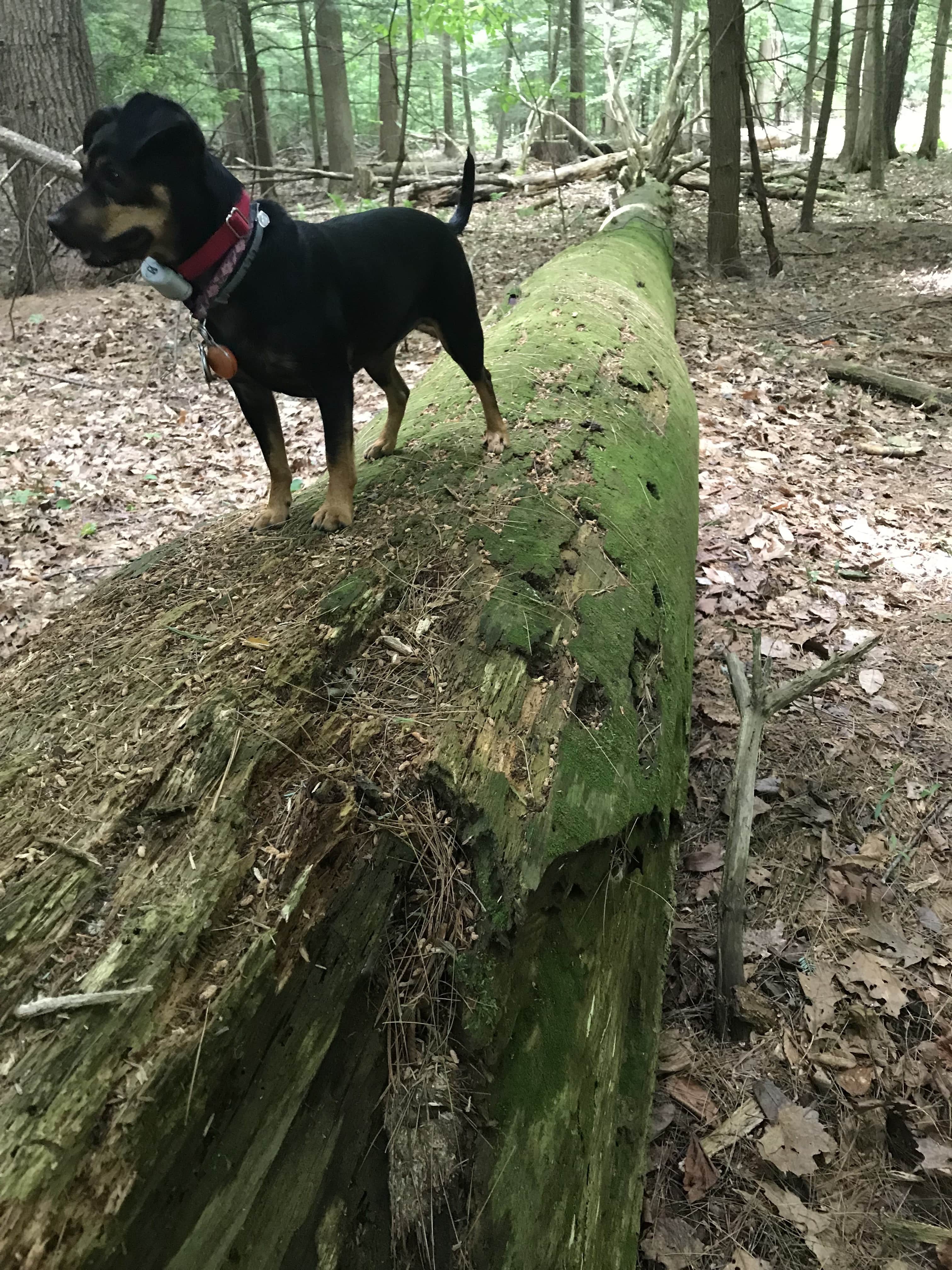 This spring, I have written several stories in The Berkshire Edge about finding treasures and pleasures in the Berkshire forest. These writings are a continuation of a year spent painting and writing in and about the forest, inspired by Lily, the small dog my husband, Eli and I adopted about a year ago. Over the coming months, I will share Lily and my adventures in the forest with you, my dear Berkshire Edge readers. To read Chapter 1, click here.

Lily is now my daily companion in the forest. She bolts into the woods like a duck finding water. Rump in the air, her nose excavates a burrow, or zippered to the ground, zigzags on the forest floor in pursuit of a hot scent. Lily leaps like a gazelle through the ferns, bounds over boulders and downed trees, prances along fallen logs and paws at tree trunks while barking at the canopy, willing herself to climb.

Lily is all movement and sensation. The forest is alive with sounds and scents, with niches and furrows, with wonders and treasures more than any dog could take in ever. Off she goes, leaping and nosing and sniffing and chasing, and sometimes disappearing.

I’m on my own pursuits, noticing a fungus here, a mossy stump there, pulling up clumps of invasive garlic mustard where I find them. Suddenly I realize that I don’t see Lily or hear her tags jingling through the underbrush. My heart stops. Coyotes live in these woods. “Lily come,” I shout, and shout again. Out of the trees shoots Lily, full tilt, hell bent, streaking up to my feet where, good dog that she is, she sits and looks eagerly at me for my praise and a dried liver cube. “You called?” she seems to say.

This morning I set out in search of varnish cap mushrooms. Three days ago, before I knew that varnish cap mushrooms existed, I noticed from the corner of my eye a flash of shiny red and white knobs and fans with margins of purist white sprouting from the bark of a downed behemoth encircled with bristling branches like a giant shocked sea urchin. What on earth were these? They looked poisonous, bright red and white in the brown and green forest. The great, dead, downed hemlock rested across a hillside of fallen rock, reminding me of the dreaded Kombi Ice fields that every aspiring Everest climber must cross.

Intrigued, I searched online under wild tree mushrooms and voila! There they were, with many names: varnish cap, Reishi, and most exotic, Lingzhi, beloved mushroom of Chinese emperors for 2000 years. The white margin, I learned, is not only edible but also “choice,” according to the many bearded experts and restorative tincture pushers extolling their virtues on the Internet. Treasure.

Rock fall be damned, I was on the hunt, a proud graduate of my recent morels and last year’s Chicken of the Woods on a tall stump beside a curve on Reservoir Road.

Armed with hiking pole, Swiss army knife, and plastic bag (I now know not to use plastic bags), I picked my way through the rocks, testing the ground of the leafy surface with the tip of my pole, sometimes breaking two feet through the leaf litter crust and loose rocks. Definitely broken ankle territory if I don’t take care.

I made it slowly to the tree and pulling my knife, filled my bag with the spongy white margins, hoping that the glossy remains would keep pushing out new white margin pillows for my table. Fried up in olive oil with salt and pepper (is there any other way?), they were meaty, a bit nutty, and we came through our degustation with no ill effects.

And of course, as with the morels, the varnish caps activated the hunter-gatherer in me. So the next morning, Lily and I set off on a quest for more. This meant the pursuit of downed hemlocks, plentiful on the forest floor, their lives cut short by wind gusts, hurricanes, lightening strikes, and a tiny beetle that was transplanted from Japan and, just trying to survive, is felling giant hemlock after giant hemlock across North America.

I found many hemlocks, lying heavily on the ground, circles of branches thrust rigidly into the air. But no more varnish caps. Instead I found a hollow stump into which I peered, feeling a bit as though I were violating its privacy, peeping into its private parts.

I also found a row of tiny white mushroom fans growing out of the tight space between bark and pith on another broken stump. I gently pried off one of these fans and brought it home for identification in my two newly purchased mushroom books (Mushrooms of the Northeast by T. Marrone and W. Sturgeon, 2016; National Audubon Society Field Guide to Mushrooms by G. Lincoff and C. Nehring, 1981). It was a baby oyster mushroom, edibility: choice.

Splashing a teaspoon of oil into my smallest frying pan, I sautéed the little guy and cut it in half, so Eli and I could savor the taste of this tiny, but choice, new treasure.