Carolyn Newberger
A wall in the woods.

Once upon a time, animals roamed the earth. They had property, territory in our biology textbooks. Animals marked their territory with pee and poop, clawings and musk. They lived and died for territory.

As humans roamed the earth they also had territories large and small. Nomadic peoples traversed large swaths of land from one to another encampment. Our native American forebears lived in Navaho nations or Cherokee nations. But I don’t think any Touareg in Africa or Navaho or Cherokee on what is now the North American continent thought about ownership as we do now, with surveyors and fences and invisible lines that say “Mine” and “Yours.”

How far up does ownership go? Into the tree canopy? Into the sky? And how far down? Into the network of beetles and roots and water and rock and lava, and beyond, clear down to China?

As I walk through the woods along Yokun Brook I can’t tell where one person’s property ends and another’s begins. Trees and logs and water and bones traverse those invisible property lines with abandon, impunity, unknowing of our human ways of divvying up the undividable.

Yet people kill over property lines.

One of the pleasures of my time in the woods is how it connects me to our community. One beloved neighbor walks through the woods to bring his dog to play with Lily. I meet another neighbor from time to time puffing on the cigar that’s forbidden in his house at the other end of the woods. Our neighbor down the road enjoys my Spring ramp pesto, partly harvested from behind her house. Some day, I hope to bring her daughter, who lives across the street, into the woods to show her the abundant ramp patches on her mother’s property.

It feels like a peaceable kingdom, and brings me a sense of safety in a troubled world. These are neighbors that I can count on and who can count on me.

Sometimes, however, the specifics of property, even in an otherwise harmonious neighborhood, can cause trouble. You may remember, dear reader, that Lily and I discovered the woods when I was training her to an invisible fence that ran from our house, eastward along the road, and across the driveway to our back cabin maybe an eighth of a mile up the road. We walked the roadside perimeter of the property with the invisible fence folks who would bury the electrified line, with the instructions that it should cross the driveway and stop there.

It turns out that the white flags that marked the line of the newly installed invisible fence went beyond the drive and several feet past the small marker that delineated the end of our property and the beginning of our neighbor’s. We didn’t watch as the installers did their job and don’t know whether the buried line actually extended beyond the marker or whether the workers placed extra flags to add more protection for Lily. Whatever the reason, our neighbor was angry.  It all ended amicably, but not until after words were spoken.

The power of that small marker in the brush made me think about the significance and dangers of property.  Along the road, steel markers, however hidden in the brush, delineate where each homestead begins and ends. One neighbor may mow to the marker, but not beyond it. The other neighbor may cultivate roses, but they end at the mown edge. As the properties extend deep into the forest, however, those lines are invisible. 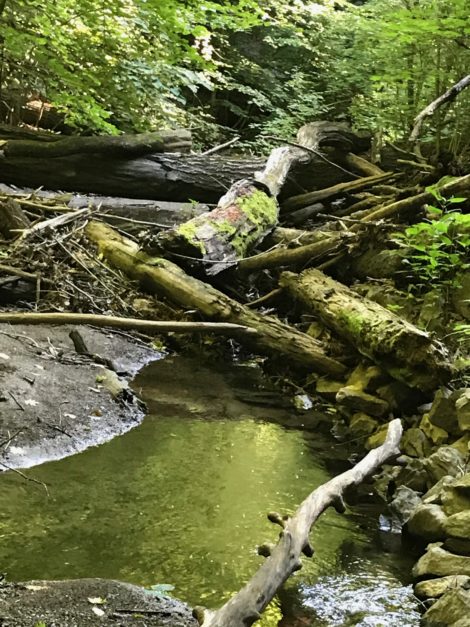 One day shortly after the incident with the invisible fence, I was sitting on the edge of the brook over a dam by our cabin made by downed trees, one a behemoth. The trees criss-cross the brook at all angles. Limbs and branches borne down by storms rest in their crevasses.

No humans can pass, and yet the brook finds its way through, eventually crossing into our neighbor’s property, and the next neighbor’s and the next. Does this water belong to me? And the rocks and the logs and the moss?  The woods know no boundaries. Trees grow and die and fall across these invisible property lines. A stone wall from maybe 200 years ago snakes through a piece of the forest. Animals roam at will. For me, the infrequent and delighted encounters with my neighbors in the woods feel more deep and enduring than our careful distinctions between what’s my land and what’s yours.

Next to me as I sat on my little stool along the brook that day, I noticed, nestled beneath the brush and brambles, a rusted out old electric oven, about one-foot square, from inside an old stove. We humans mark our territories in the strangest ways and in the strangest places.