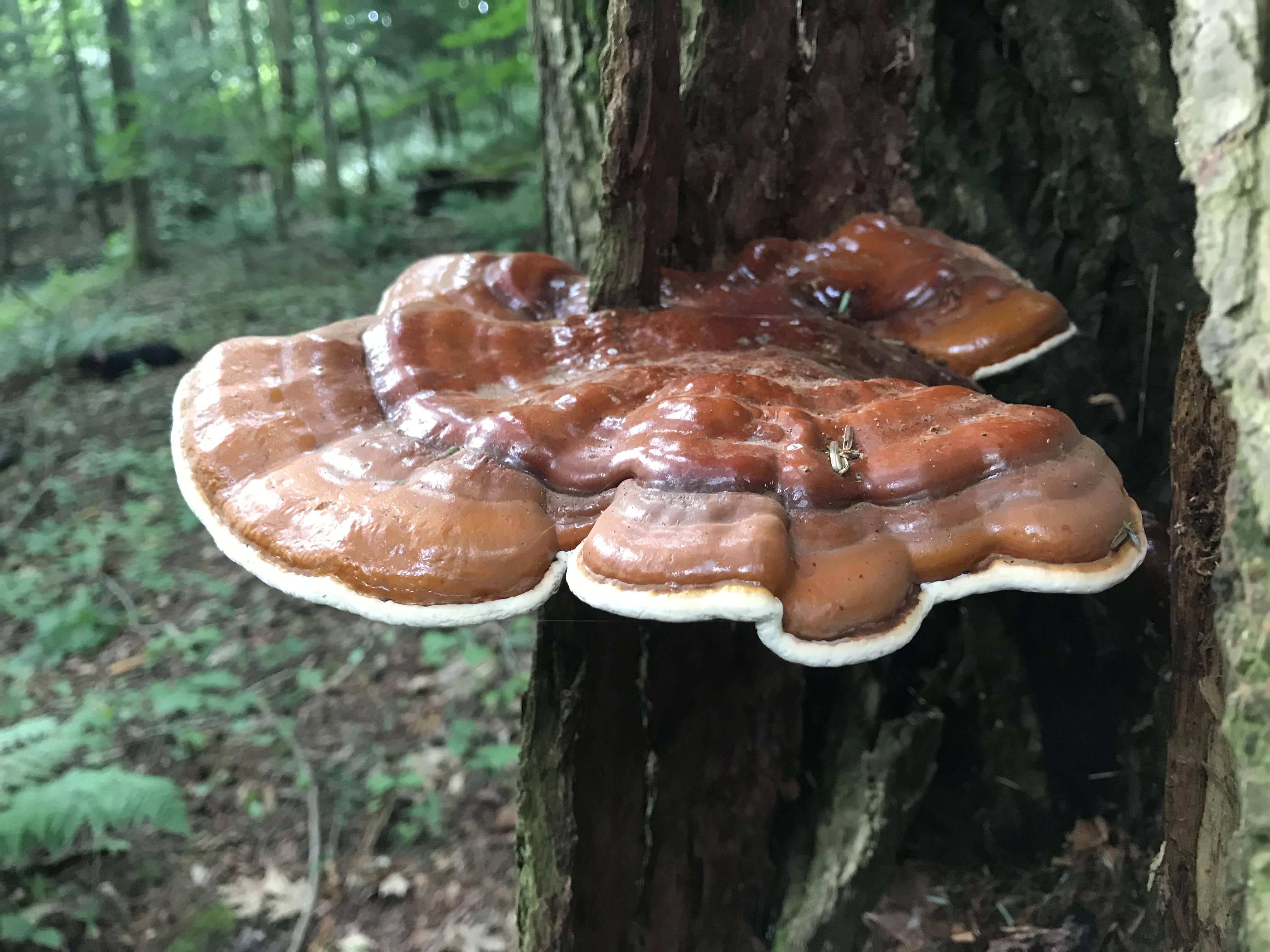 Today Lily found a bone — not just a bone, but a leg: the hip, thigh, shin and hoof of a deer, undoubtedly the leavings of a coyote kill. Lily dragged it out of the leaves and settled down, pulling on white sinews and desiccated bits of red flesh. It stank. I called Lily away and we continued into the woods, leaving the rancid haunch behind.

I was searching for the embracing trees. Several days ago, happening again on their sweetly entwining limbs, I had noticed something even more beguiling. Below the embracing branches, two burls pressed together sharing an unmistakable kiss — for a year? For a century? For eternity?

Then, just as surprising, I spotted a shiny red varnish cap mushroom shelf emerging from the rear of one of the two pines. In a marvel of adaptation, it grew through a hole in a piece of bark hanging from above, its stem between tree and bark, its red flesh and pure white edges emerging on the other side.

I could not harvest this mushroom. It seemed to belong to the tree even though it looks different, speaks another language and even takes its energy from the tree. Yet they are a unit, a kind of family with this red, shining ornament that both does and doesn’t belong to the two pines in their eternal kiss and embrace.

So Lily and I left the tree and went to my favorite spot, a rock beside Yokun Brook where the water tumbles beneath my feet, and I reflect on the various complexities of life. Sometimes in those moments, I meditate with my iPhone meditation app chiming me in and chiming me out — a high-tech touch in a low-tech situation!

While I’m meditating away, I don’t realize that Lily has left and returned, dragging the deer leg down to this sacred space and eagerly pulling at the rank remains. Will it make her sick? Probably not, despite her diet of farm-raised chicken in gravy supplemented with organic lamb and sweet potato kibbles. Does it make her happy? That speaks for itself. She tugs and tears at this malodorous carcass with a glee that I never see at the easy eating in her bowl!

There’s a lot of meat on these bones. Lily tears at the white fibers and cracks into red marrow as if these bones still carry life.