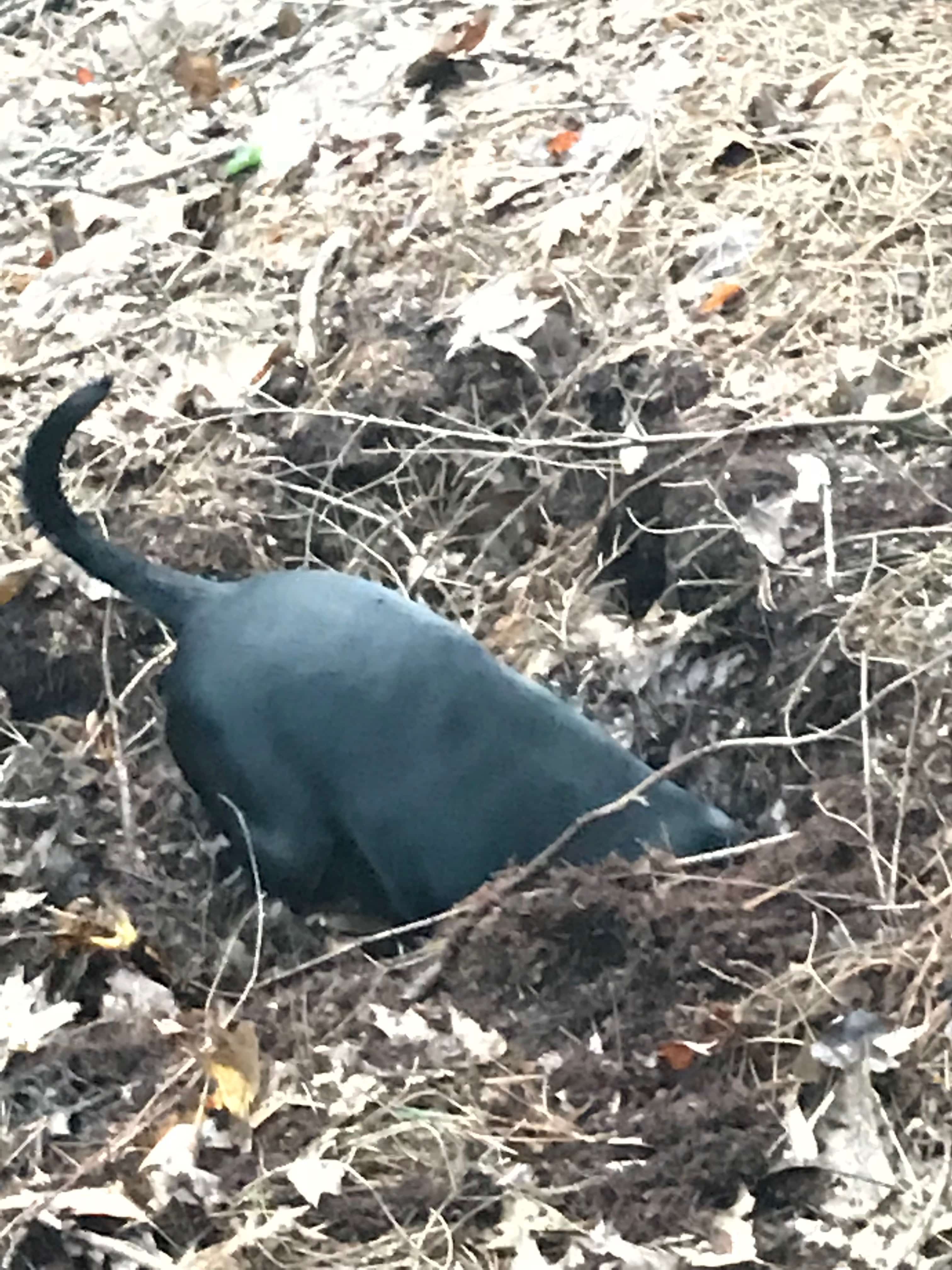 On that hot, dry morning, as I sat on my stool painting the trunk of an oak weeping from a cleft above its roots, I heard Lily yelping in the woods. “Lily, come,” I called. No answer. No telltale jingle of collar tags as she dashed in for her dried liver reward, just more yelps and some sharp barks spaced a few seconds apart. I became uneasy. Is this what Lily would sound like in the jaws of a coyote? Somewhere in the distance, a pileated woodpecker tapped piercingly, like a Viking god hurtling thunderbolts from the sky.

I stood up urgently, folded the stool, jammed it into its nylon cover, zipped my pouch with pens and paints, shoved it into my fanny pack, buckled the pack around my waist, hefted the stool…What kind of dog mother am I? Wouldn’t a coyote have taken off with Lily by now? But the yips and yelps continued. Lily is alive and in the woods behind the weeping, clefted oak.

Off I hurry, lurching over roots and stumps and shrubs and prickles between my distressed dog and me. And then I see her, a small black figure digging furiously beneath a tree, no coyote in sight. Relieved, I approach. Lily is yelping as she digs. She comes up for breath panting, then, with a cry, commences burrowing again, biting through stringy rootlings with her sharp teeth, dirt flying between her hind legs, snout pushing into the hole.

Something stops me from stopping her. She goes deeper and deeper. There’s movement in the hole. Lily’s head jerks back and plunges in, jerks back and plunges in again. Something is in there. Furiously whining and digging, her front paws like razors slicing the earth, she emerges from the hole with her prize, bigger than a mouse: a ground squirrel. Furiously, Lily whips her head back and forth, the squirrel hanging limply from her jaws, puts it down panting, then shakes it again.

This is what Lily is meant to do. This is what she’s enacting when, with bright eyes, she eagerly offers us her plush green duck toy, then tugs back against our grip, shaking and snarling. Lily is on the hunt when we toss the duck across the room and she careens after, whipping it in her mouth before bringing it back to us for another throw and another and another.

In the woods, the poor creature dead, we start for home. Lily trots along, the squirrel dangling from her jaw. I worry about how to handle things when we get home. At least it’s a fresh kill, not some fetid corpse from the forest floor. Do I let her take it through the doggie door? How do I get her to keep it outside? If I throw it away, would that be violative of Lily’s essential dogness?

While we’re walking, Lily trots off into the forest to the left of the path. She goes in about 100 feet and drops the squirrel. Is she going to bury it, to eat it? Lily returns immediately, the squirrel abandoned. She was in it for the kill.