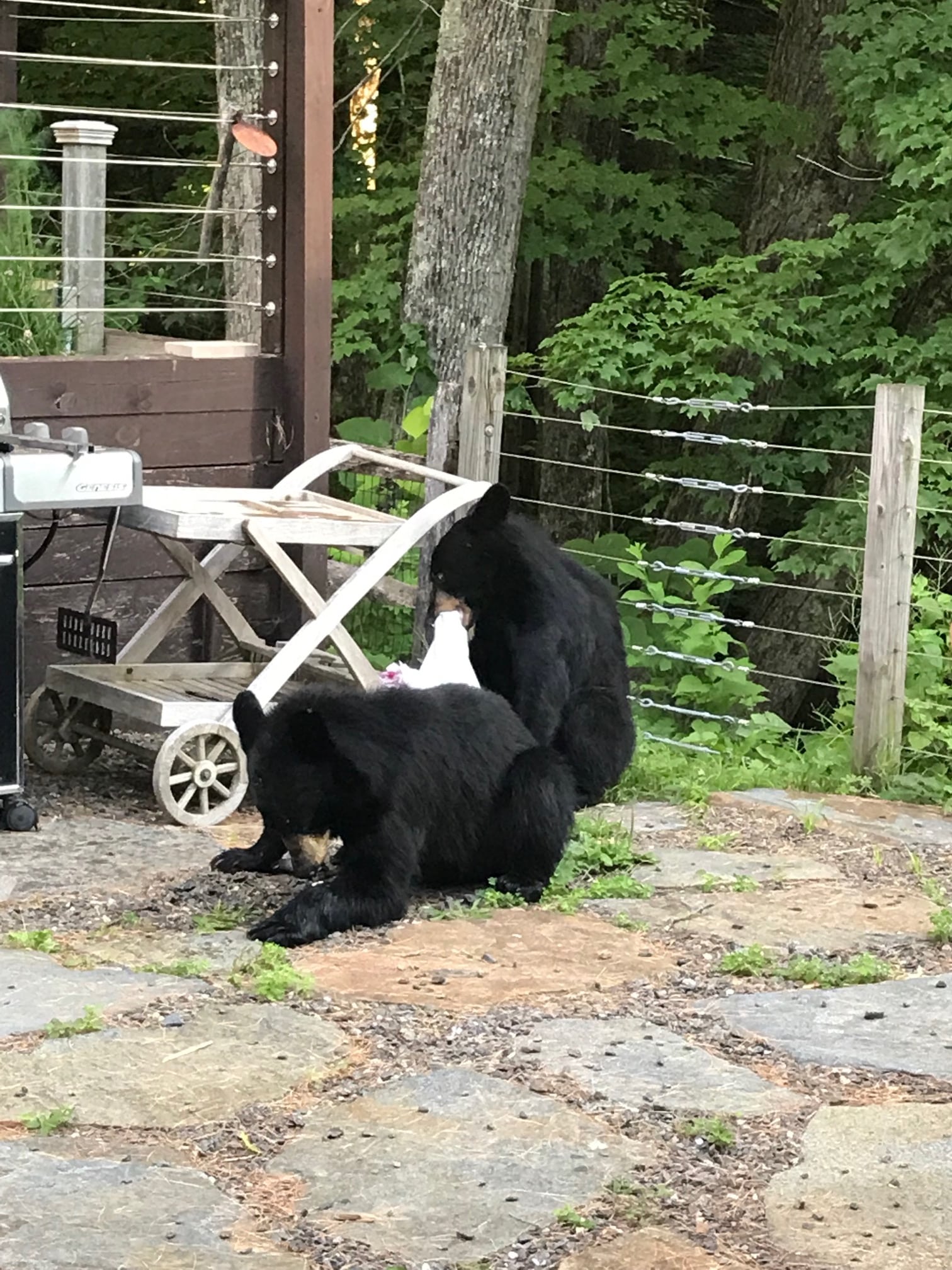 Bears are around. I know this for sure because two young black bears visited our patio early this summer after a barbecue for Boston University Tanglewood Institute tuba players. One can imagine the abundance of T-bone steaks barbecued on that grill to feed what one also imagines to be the appetites of players of the largest brass instrument in the orchestra.

The following morning at 5 a.m., Lily awoke with a start, bolted from her warm bed, barking furiously. We opened the blinds and there on the patio, we saw two sleek young bears. They had made their way up the hill and over the fence to nose around the grill, pull bagged garbage out of the can and discover therein mussel shells from an even earlier meal. For days we discovered mussel shells licked immaculately clean all over the hillside.

Bears are around us. I remember my surprise when we first moved here, looking out the window to see a bear sauntering down the road. I heard neighbors’ stories of bears. One neighbor, while taking a walk, was joined by a bear walking parallel to him along the other side of the road. They both strolled calmly along and eventually the bear turned back into the woods. Another time, a saxophone-playing friend who lives on Stockbridge Bowl recounted playing “I Remember You” on his stoop when a bear came along, sat down and listened for a minute, gave him a look that seemed to say, “Who do you think you are? Lester Young?” and continued on its way.

Not all the stories are so benign. A bear chased a neighbor on our street. Across the road a bear swatted a dog that was understandingly agitated when a bear appeared in its yard. Fortunately, the dog was unharmed.

Last year, a neighborhood matriarch who has lived here for several generations warned me not to walk alone in the woods we share. But I do. I have never met up with a bear and I am not afraid. My bear bell jingles on my hiking pole, which I could use to defend myself if needed. But I don’t expect to need it. I’m not sure what I would do if I encountered a bear, but my childhood fantasy is that I’d talk to it nicely and it would know that I meant it no harm. That’s not too far off, according to BearSmart.com, which offers the following advice on black bears: “If you encounter a bear on the trail, or in your campsite, stop what you are doing and evaluate the situation. Identify yourself by speaking in a calm, appeasing tone. Back away slowly, preferably in the direction you came. Walk, don’t run, and keep your eye on the bear so you can see how it will react.”

Of course, Lily is another matter. She is a barker. She lunges and retreats and lunges again. Lily would be a problem. This morning, as we walked toward the far end of the woods searching for the swamp and its giant skunk cabbages, I heard hooting. It could have sounded like owls, but something was not quite owl-like. It was coyotes, and nearby. Lily came running when I called, eager for her dried liver treat. I snapped on her leash and abandoned the swamp. Then I felt fear: There’s no talking nicely to a coyote.