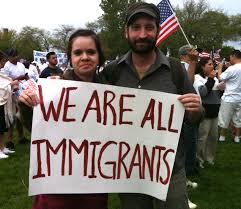 Great Barrington — President Donald Trump’s recent crude and insensitive remarks about immigrants from Africa and the Caribbean have drawn the ire of friend and foe alike. But nowhere has the consternation been stronger than in the Berkshires, where immigrants play an important role in the workforce and progressives dominate the political landscape.

For those who live on another planet — or have been living off the grid — in a meeting Thursday with members of Congress in the Oval Office to discuss a bipartisan immigration deal protecting immigrants from Haiti, El Salvador and African nations, Trump asked, “Why are we having all these people from shithole countries come here?” Trump further suggested the U.S. invite more immigrants from Norway, a predominantly white country whose prime minister had met with Trump a day earlier.

The crude remarks were widely branded as racist by Democrats. Even some Republican members of Congress were critical of the president, though much of that criticism was muted compared to the opprobrium heaped on Trump by progressives and immigration advocates.

And adding insult to injury, the comments came in the run-up to two important milestones in recent history: the birthday of iconic African American civil rights leader Rev. Martin Luther King and the seventh anniversary of the devastating earthquake in Haiti that killed nearly 250,000 people.

Many were alaso upset by the Trump administration’s decision to end the Temporary Protected Status (TPS) program at the end of next year for hundreds of thousands of immigrants from El Salvador, Haiti, Sudan and Nicaragua. And over the summer, Berkshire County’s immigration advocates were fretting over Trump’s announcement that he would rescind the federal Deferred Action for Childhood Arrivals program (DACA).

Massachusetts Gov. Charlie Baker, a Republican, called Trump’s comments “appalling and disgraceful” and said the president “owes an apology to all of the people who he broad-brushed with those statements.” Sen. Elizabeth Warren tweeted that the comments “racist, vile and disgusting,” while Sen. Ed Markey in a tweet called them “words of hate.”

Congressman Richard E. Neal (D-Springfield), who represents Berkshire County in Washington, through a spokesman told The Edge: “President Trump should be ashamed of his comments regarding the people of Haiti, El Salvador and the African nations. His hateful remarks should be condemned in the strongest possible terms. As we prepare to honor Martin Luther King, Jr. this weekend there is no place in our society for this divisive, insensitive and hurtful language.”

In Berkshire County, where there are an estimated 12,000 immigrants, with 66 percent of them being Latino and 11 percent African, the reaction was swift and near-universal.

“The comments are definitely beneath the dignity of the office he holds,” said Brooke Mead, who heads the Berkshire Immigrant Center in Pittsfield. “It is a dangerous thing to say and it doesn’t uphold our values.”

Mead said when she traveled to places like Haiti and Africa, it made her “a better person,” so the president’s words are “not only embarrassing, but just dead wrong. All members of Congress should demand that he apologize.”

Mead related the story of a man from Ecuador who was deported last week. The man, now 32, left Ecuador in his teens, fleeing economic disaster and looking for a better life.” He married another immigrant, they settled in Pittsfield and had two young children. He had no criminal record and was a hard worker, holding down various jobs to support his family.

“They’re convinced that a bigoted person in their neighborhood called ICE (Immigration and Customs Enforcement),” Mead recalled, referring to the immigrant couple.

On Tuesday (Jan. 9) the man was taken into custody and forcibly sent back to Ecuador, leaving behind his wife and children.

“They had both cared for my youngest child,” Mead said, her voice cracking with emotion. “This is really pretty unimaginable. Their kids are like 9 and 13. They had just bought a house.”

Mead and others interviewed for this article were also troubled by the Trump administration’s decision to end TPS, which protects individuals from certain countries, including El Salvador, from deportation when facing extreme hardship if forced to return to very violent homelands or nations that had been devastated by natural disasters.

“Unfortunately, we expected the administration was going to deny TPS,” Mead said. “But El Salvador is considered one of the most dangerous places in the world.”

Mead described the mood among BIC’s clients as one of “unprecedented fear,” especially among Salvadorans. After two undocumented immigrants were picked up in January of last year, it “caused a wave of panic,” she said. But fortunately a rash of ICE raids did not occur in the Berkshires. Perhaps, Mead surmised, it is because ICE simply “does not have the resources.”

Michele Sisselman is an immigration attorney from Pittsfield. She works routinely with immigrants, including many who have used BIC, and is a member of The American Immigration Lawyers Association (AILA), which issued a statement on Trump’s remarks, which it called “derogatory and hateful.” Click here to read it.

“Unfortunately, what came out of Washington today is a sad commentary on the current administration which I, as an immigration advocate, respectfully suggest is ignorant, inappropriate and insensitive,” Sisselman told The Edge.

Like Mead, Sisselman was extremely concerned about Trump’s actions on TPS and its implication for Salvadoran refugees. She said starting in 2001 El Salvador was devastated by a series of earthquakes and natural disasters that sparked a crime wave, documented by the U.S. government and resulting in President George W. Bush designating El Salvador’s citizens as eligible for TPS.

“It is beyond callous to rescind TPS now and send nearly 200,000 people and their families to a country still in chaos from environmental destruction and criminal activity, including a tragically high homicide rate, particularly given the strong roots that Salvadorans have put down in the United States,” Sisselman said. “Revoking TPS harms communities, families, and businesses across the nation. This is a misguided and inhumane decision.”

Sisselman also characterized the policy as anti-business since it would throw “businesses who rely on their long-time employees who have TPS, into disarray.”

“Longstanding members of the community are terrified they will be forced to choose between leaving their children in the U.S. or taking them to a dangerous country they may never have seen,” Sisselman added.

As for the mood among her many clients, Sisselman said a few months ago, she “received call after call from Dreamers,” but over the past few days she has been receiving calls from Salvadorans.

“They want to know what they can do for their family members, for themselves and often for their employer,” Sisselman explained. “For some there is instant help, for others I advise to watch and listen to the news and wait to see what will come out of Washington.”

State Sen. Adam Hinds, who represents Berkshire County and portions of the three counties to our immediate east, told The Edge, “The words reportedly used are as alarming as the content of what was said. The presidency should be the place we turn for inspiration and unity, realization of our cherished principles and to represent a beacon of hope for the world. Instead we hear division, disregard and thoughtless emotional comments.”

State Rep. William “Smitty” Pignatelli (D-Lenox) told The Edge that America has always been a nation of immigrants and so he is surprised at how quickly some forget their own roots and their own connections to immigration. Pignatelli’s own grandparents emigrated from Italy to the Berkshires because they were seeking a quality of life they could not find back home.

“We all came from somewhere else,” Pignatelli said. “America is a melting pot; we embrace different cultures and ethnicities and we always have. The comments made by the president have set our country back at least 50 years. They are reprehensible and frankly, an embarrassment.”

But not everyone wanted to criticize the president over his words. New Marlborough activist Joyce Hackett of Lift Every Vote told The Edge in response to request for comment that, “Trump’s offensive remarks aren’t what we should be devoting time, attention, or words to.” She insisted that “it is not news that he’s a bigot.”

“Let’s focus on what matters: real politics that have real impact on real people’s lives,” Hackett said. “Reporting on his comments about Haiti etc., and our responses (we are angry we are ashamed we are disgusted, we all know that before the article’s written) — are ‘Feelings, nothing more than feelings.'”

However, there is evidence that Trump’s words will have significant policy implications. It is now an article of faith in much of Washington that Trump’s tirade will make bipartisan immigration reform far more difficult to achieve and that it has eroded America’s moral authority on the issue. Click here, here and here for examples of that thinking.

There are few Republicans in Berkshire County, but The Edge was able to get ahold of Andy Moro, who chairs the Great Barrington Republican Town Committee and is a Trump supporter, albeit sometimes reluctantly. Moro said he is constantly surprised at “liberal Democrats’ sensitivity to everything President Trump has to say.”

“He doesn’t help himself with some of his remarks,” Moro acknowledged in an interview. “But liberals always played the race card. When is the last time Nancy Pelosi and Maxine Waters vacationed in Haiti and now we have a liberal Congress claiming that chain migration is upsetting to African Americans who were brought here in chains 200 to 300 years ago? Give me a break!”

But Mead says immigration advocates and progressives must soldier on and redouble their efforts: “It’s more important than ever that everyone stand up and not be a bystander but an upstander.”