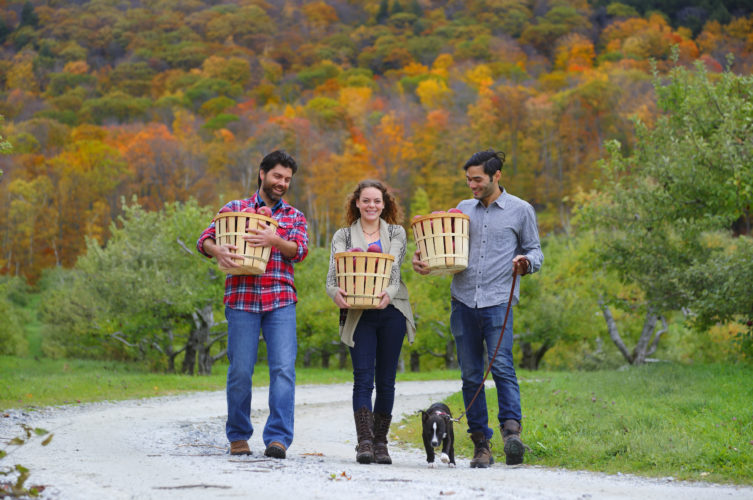 There were ten thousand
thousand fruit to touch,
Cherish in hand, lift down,
and not let fall.

So wrote New England poet (and orchardist) Robert Frost in “After Apple Picking.” He picked his own, and you can too, this fall, at orchards in the Berkshires.

Even in this precarious era of COVID-19 The Berkshire region is ideal for apples. Here we put our spotlight on area apple growers and their pick-your-own operations that you can still visit while observing special instructions for social distancing, mask-wearing and common courtesy to fellow pickers. Throughout this article we have provided links to the growers’ websites to help you plan your visits.

Early settlers of the Berkshires grew apples for cider (hard cider) and vinegar, and discovered by trial and error which varieties were best adapted to their soil and location. More than 60 varieties, including many you will never find at your local supermarket, are now grown in the Berkshires. You’re invited to pick your own as soon as the apples are ripe until the season is over.

We’ve all seen paintings of Eve reaching for that apple, but when you do it yourself — at the invitation of the owners of the orchard (that was Eve’s mistake) — and grasp those red, green, or yellow globes, so nicely fitted to the human hand, swinging from the tips of apple boughs, you can see why Eve (and Adam) yielded to temptation. And the taste of a fresh apple, bursting with juice, that you’ve picked yourself in an aromatic apple orchard on a sunny afternoon in season — that’s what paradise is all about (now), and it’s an experience that many Berkshire residents and visitors look forward to every year.

You’ll not only see (and perhaps show your children)
where your food comes from, you’ll have a chance to meet the people who work year-round to provide it.

You don’t have to get up on a ladder (though some orchards make short ladders available). Most of today’s apple trees are dwarf varieties whose fruit can be reached from the ground. On older or taller trees, professional pickers pick the heights, leaving the low-hanging fruit for you. Check orchard websites (links are provided for your convenience below) to see what’s picking at any particular time.

Even if you don’t get out and do the picking yourself, a visit to an orchard farm stand is almost as good. There you’ll find bags of apples, as well as fresh cider, cider donuts, apple pies, homemade jams and jellies, and rows of pumpkins awaiting you in sight of the trees and fields that produced them. You’ll not only see (and perhaps show your children) where your food comes from, you’ll have a chance to meet the people who work year-round to provide it.

Orcharding is hard work! The setting out of new trees, the pruning, the mowing, the spraying to control insects and fungi, the picking, the pressing, the bagging and bottling — not to mention the threat of hailstorms, late frosts, and other vagaries of Mother Nature, now compounded by the effects of climate change. And then comes the selling, an operation in itself. No wonder that it’s often a multigenerational family business and that family members often have “day jobs” as well.

Many orchards combine several businesses in one, like HILLTOP ORCHARDS in Richmond. “It definitely requires you to be resourceful,” says John Vittori, who has co-owned the 200-acre operation with his sister Wendy since 1987. “We offer not only apples and other fruits and press a lot of cider, we host weddings, and since 1996 we’ve had a winery too (the Furnace Brook Winery). We make hard cider from our own apples, but we buy grapes from the Northeast and California to make the wine. We also make mead from locally produced honey. Oh, and there’s cross-country skiing and snowshoeing in the winter and full moon hikes in the orchard throughout the year. Hilltop has 27 different varieties of apples available, with Honeycrisp and Gala among the most popular. On fall weekends, expect live music and hayrides, too. Freshly pressed cider is available year round at the retail store, as well as cider donuts and Old Chatham (NY) Sheepherding Co. cheeses. With Covid-19 restrictions still in place Hilltop’s tasting room remains closed, but patrons can still purchase DIY tasting packages.

Also located in Richmond, BARTLETT’S ORCHARD is now into its fourth generation on 52 acres on the slopes of Lenox Mountain. Bartlett’s produces between 15,000 and 20,000 bushels of apples per year, and you can pick some yourself from Labor Day to the end of the season sometime in mid-October. The Orchard has 13 varieties available for pick-your-own, including Macoun, Mutsu, and Liberty. Its retail store, with everything from baked goods and pumpkins to fresh cider and coffee from West Stockbridge’s No. 6 Depot, is open year-round. Ron Bartlett, who oversees the store and also works as a sheriff’s deputy, says that family heritage and the opportunity to work outside brought him back after some years away. He’s seen the orchard’s trade shift from a mostly local clientele to one tipped toward tourists from New York and Boston. “They come with their families to connect to the land and see how food is grown and harvested,” says Ron. “Apple-picking seems to put everyone in a good mood.”

JAESCHKE’S (PRONOUNCED YES-KEYS) ORCHARD is another family orchard that grows 33 varieties of apples on 55 acres in Adams, including Honeycrisps and Macs, along with heirlooms like Stayman Winesap, Wolf River, Baldwin, and Winter Banana. The orchard is located on the eastern slopes of Mt. Greylock and affords stunning views over the Hoosac Valley. There has been an orchard on the site since 1881, and a few grafts taken from the original trees still produce apples (of uncertain variety) on modern rootstocks. Jaeschke’s grows peaches, plums, and grapes at the orchard, too, and flowers and tomatoes in its greenhouses; the strawberry plants in hanging baskets are a current hot seller. Rhetta (the matriarch) makes jams and jellies, and if you try one of their cider donuts, chances are you’ll walk away with a bagful.

LAKEVIEW ORCHARD in Lanesborough is also in the northern end of Berkshire County. In 1996 Dave and Judy Jurczak left jobs as a pipefitter and schoolteacher, respectively, and planted a thousand apple trees on a 30-acre former dairy farm. They’ve been planting apple, peach, plum, pear, apricot, and cherry trees, as well as raspberries, blueberries, currants, saskatoons, and vegetables ever since. They chose dwarf trees from the start, and their pick-your-own orchard is a family favorite.  One of their specialties is the Brock apple, a cross between a Mac and a Yellow Delicious that has a bright, creamy red color with green highlights and a sweet, tangy flavor. The Jurczaks press cider, bake cider donuts, process their own honey and maple syrup, and offer Polish specialties such as kapusta, golumpki, and pierogis from their retail kitchen. “Just keeping busy,” says Judy.

“You’ve got to be dedicated to grow apples,” remarks 76-year-old Bill Riiska of RIISKA BROOK ORCHARD in Sandisfield, half an hour due east of Sheffield at the southern end of the Berkshires. Bill is the grandson of one of four brothers who came from Finland to farm the property in the early 1900s. The farm made the transition from cows to apples in the early 90s. Now 25 acres of hilltop land are devoted to 11 varieties of apples, including Macs, Fujis, Ida Reds, and Honeycrisps. Cider is made from a blend of Empires and Galas. “A lot of families come to the orchard to pick. It’s inexpensive outdoor fun. Plus, you get to eat the apples,” says Bill, whose two daughters help out on the weekends. “People from New York City tell me that picking apples is therapeutic.” In which case, the orchard should be having a good year.

“We have a feeling of stewardship for the land, and we’re able to pass it on to our children. Plus, we love providing for other families who want to eat organically.”

WINDY HILL FARM is located right off Route 7, a mile south of Stockbridge. The area was more rural when Judy and Dennis Mareb planted an apple orchard on a former dairy farm there in 1982. Thirty-six years later, they pick 25 varieties, newer ones like Candy Crisp and Honeycrisp and old favorites such as Baldwin, Macoun, and Northern Spy. “People come from all over to pick,” says Judy, “and they usually take home our unpasteurized cider too.” The Farm is also a landscaping business and a nursery and garden center, employing a staff of 25 in season. There are blueberries and pears and Christmas trees and, in the holiday season, wreaths and winterberries slipped into sleeves. It goes without saying that they also do cider donuts and pies, with the help of other local food businesses. This year they’re growing pumpkins and gourds, too. “You can’t sit still in this business,” says Judy. The Farm is open through December.

BEAR SWAMP ORCHARD AND CIDERY lies on the eastern side of the Berkshires in the Franklin County town of Ashfield. It’s the only certified organic orchard in the region, and it’s small, with only five acres currently in production. Only one or two varieties will be available for pick-your-own this year, but sample the cider and you’ll be glad you came. With organic growing practices, the fruit develops in a more natural way, and you can taste the difference: this is cider with terroir.

In addition to sweet cider, Bear Swamp also makes several varieties of organic hard cider; tastings take place weekends when the orchard is open for apple picking, and Saturday afternoons later in the season until Thanksgiving. The present orchard got its start (or restart) when Jen Williams and her husband Steve Gougeon reclaimed an abandoned orchard in 2006.  He’s a cabinetmaker with home-brewing expertise, she’s a biology teacher with a Ph.D. in ecology; their two teenaged sons also help out. With construction of the solar-powered cidery four years ago, the orchard transitioned from an “out of control hobby” into a business.

Bear Swamp pick-your-own days are traditionally Friday-Saturday-Sunday from late September through mid-October. Jonafree, the featured PYO variety, is a bright red, full-flavored, all-purpose apple with plenty of juice. The owners are busy working on a safe opening and PYO strategy and ask that you check back on their website for this season’s specific opening days and other safety details. Why does orcharding have such a hold on the Bear Swamp owners? “We have a feeling of stewardship for the land, and we’re able to pass it on to our children. Plus, we love providing for other families who want to eat organically. They seek us out and tell their friends.”

What makes orcharding in the Berkshires sustainable? You do! And the region’s growers need you to safely patronize the orchards that help make this region a rural paradise now more than ever. 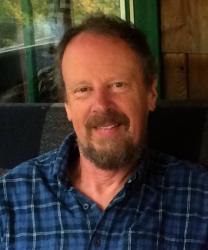 Phil Holland is a writer from Pownal, Vermont. He’s the author of books on Vermont history, including "A Guide to the Battle of Bennington and the Bennington Monument." He is a contributor to the Berkshire Edge Magazine.