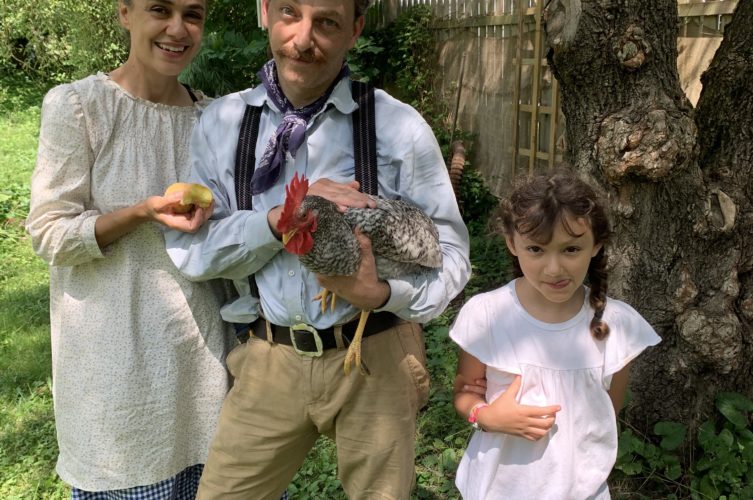 Julie Anidgar, Perry Grebin, and their daughter Ellie, with the rooster on the Hill. Photo: Roselle Chartock

So we have this wonderful rooster who lives on our street in Great Barrington. Our rooster, Speckle, lives with Julie and Perry and their wonderful daughter, Ellie. This rooster adds character to our street. The only problem, as far as we’re concerned, is that we really can’t listen to the rooster the way we’d like to.

For years, the people of Great Barrington have been told that if you don’t have 5 acres in the middle of the town, you can’t have a rooster. Our late friend, Linda Norris, had a rooster and lots of chickens and she had to give them up because of this town rule. Linda really treated her chickens and rooster right. She built a house for them and you couldn’t have had a better human partner in life if you were a rooster. Nonetheless, things being what they were, Linda had to give up her rooster. Now Julia, Perry and Ellie have the same problem. They were recently visited by the town’s Rooster Control Officer (RCO) who told Julie (a brilliant Ph.D. and also really nice) that she had to get rid of the rooster and here’s where it gets interesting.

Julie is an anthropologist who is much sought after all over the country. Because she is who she is, she decided to Town Hall to research the zoning regulation about not keeping roosters. Guess what she found after spending quite a long time looking through all the rules, laws and other documentation? That’s right, folks, she found absolutely nothing — nada, nunca, nothing.

So our heroine spent the day speaking with major Great Barrington officialdom, from the town manager to the clerks and other town bigwigs. No one could help her. No one could produce the law or anything like it. Maybe it is hidden somewhere but no one could help Julie. Then, at the last moment, she was told that there was a provision in the zoning bylaw, obscure, but there.

So rather than break little Ellie’s heart over a banned rooster Julie decided to do the right thing and pass around a petition. She’s looking for a hundred signatures to bring the matter up at the next special town meeting. She wants to establish a new law stipulating that you can have a rooster. There are lot of good reasons to have roosters. One is that they are really quite gentle, and much preferable to some of the folks who live around here and make a lot of noise of the kind that brings the Great Barrington Police Department to their door. Then, too, there are people like me who play musical instruments like the banjo that constitute an anathema to too many people.

Julie found that many of us supported her petition. She needed a hundred signatures, but she started very late in the game and was racing against a deadline. She needed this like a hole in the head but hey, sometimes you are in a position to right a horrible wrong and as a result of all your good work, you go down in history for something that may seem trivial compared to problems like Donald Trump and a coronavirus.

It’s just wrong that hidden in the zoning law is an obscure provision that has been depriving so many of us of our rooster rights over the years. At first, I thought that Julie might be going in the wrong direction since if there is no law or rule in the first place why obey a Rooster Control Officer? Turns out that she was absolutely right to do what she is doing. Why not have a rooster law? Roosters have rights, too. Julie lives at 15 Sumner Street in Great Barrington on the Hill and her petition will be on a table in her front yard. Sharon Gregory at 32 Hollenbeck also has the petition.

So in the name of roosterism and all that is good, get over there, sign the petition and restore justice to our neighborhood.