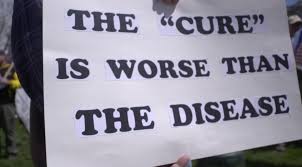 But wait! There are some things that will immediately start a fight around here. One of them is the question of whether or not to get vaccinated. All you have to do is whisper about it and people will come out of the trees. I was once confronted by a guy who was a total anti-vaxxer. If I see that guy at a party, I run to the other side of the room. This guy is passionate about not getting vaccinated or letting his kids get vaccinated. No matter what you say, it will turn into a fight over vaccinations. Say “rose” and he’ll start yelling about vaccinations. It turns out that he is not alone. There are certain cults, often under the name of a particular substrata of educational philosophy, where this anti-vaccination policy lives.

Let’s face it — vaccinations for diseases — from measles to polio — have a long history of success. Countless lives have been saved. Names like Jonas Salk will go down in the pantheon of heroes because of their work. Despite the science that proves these vaccinations work on the overwhelming number of people who take them, there are parents who simply refuse to comply with schools, even when the states and localities require them to.

Soon we hope to have a vaccine that will stop the terrifying COVID-19 pandemic that has already taken hundreds of thousands of lives and apparently left many people with long-term, devastating health problems. The number of people who have been infected is alarming and there is no end in sight.

Now our national politics have become a home for the debate. Donald Trump is clearly worried about losing the election and is desperately looking for a magic bullet, real or imagined, that will turn the currently hostile tide in his favor. One of his biggest problems is the COVID crisis. He seldom talks about it, but his pollsters know that if he loses, it will in large part be attributable to his handling (or not handling) of the pandemic. Of course, he keeps claiming (and lying) about how effectively he has handled the COVID crisis, but nationwide polls suggest that people aren’t buying these lies.

Which brings us back to vaccinations. We have all be waiting for an effective vaccine that will put an end to our nationwide misery. Despite Trump’s announced antipathy toward some drug companies in his original campaign, we surely know that he is now depending on these same companies to supply him with the magic bullet before the election in November. He knows he needs to convince people that he has come to the rescue.

The problem is that before we can put a vaccine on the market for wide distribution, there are strict protocols that must be adhered to. We can’t allow people to be put at risk. Trump is obviously pushing the agencies that are responsible for the protective protocols to get moving, but people are still unsure as to whether or not they should take any vaccine that comes out on his watch. It is already being suggested that the people who have been on the front lines of health care should be the first to receive the vaccine, even before the required protocols have been met. Sure, let’s punish those who have been our heroes. My bet is that some of these people will be required to get vaccinated even if they would rather not because they were suspicious that protocols had not been followed.

This raises the question of whether each of us will rush to take the vaccine. For the anti-Trump people, this will become a political issue. We all know that the reason why he wants to forgo the protocols established by our premier health agencies is that he wants to win the election and he thinks this will be his ticket to victory. Of course, he should be the very first person to get vaccinated.