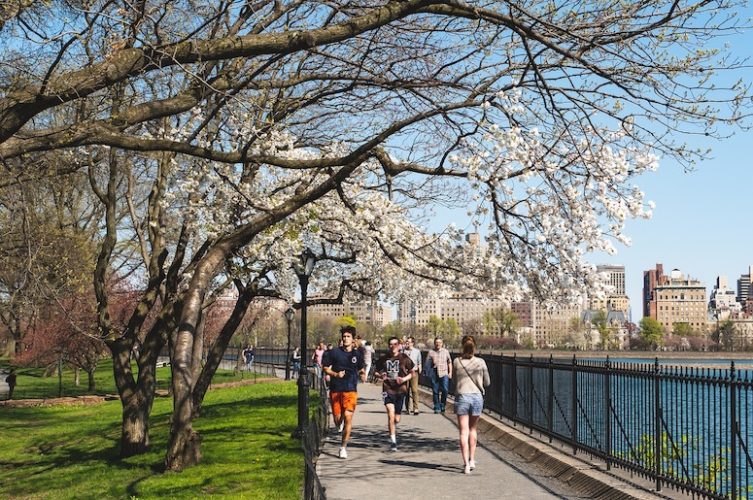 "It was nippy and some of the many runners and walkers had a lot less clothing on than I would have advised, but hey, that’s an individual choice." Photo: Spring in Central Park pre-pandemic

I really didn’t want to leave Great Barrington for our first trip to New York in over a year. In the end, it was a choice between pleasing Roselle, my magnificent and very young wife of over 50 years, or obeying my president and governor(s) who have warned us about all the things we shouldn’t be doing. We all know that the pandemic is picking up steam again as the weather gets better. So, with my heart in my hands, I acquiesced but set certain conditions.

I would not go on a train. We would share the driving. She drives halfway and I drive in the City. She’s a terrific driver, but doesn’t like navigating New York’s busy streets. By driving, we don’t risk exposure to or from others on the train. We have both been vaccinated, but there are more and more warnings about the ability of the virus to mutate and now we are hearing from the pharmaceutical companies about the possibility of booster shots. Put another way, we are not out of the woods.

I have an app that allows me to preregister and pay for a garage space in New York. It has always worked, but not this time. I had paid and been given a receipt, but when we reached the garage the attendant said there was absolutely no room. I persisted, showed him my receipt, and gave him a tip. Without saying a word, he found a space.

Well, it was snowing in Great Barrington and the city was great. I walked my five miles in Central Park around the usual circular road and I certainly didn’t see fewer people than usual. Many wore masks, some did not. It was nippy and some of the many runners and walkers had a lot less clothing on than I would have advised, but hey, that’s an individual choice. I will tell you that we almost always see the same guy wandering the streets (Roselle’s good luck charm) but the beautiful thing is that he was wearing a mask. Good for him.

One time, a few years ago, I was walking later than usual and there was a well-dressed woman who kept walking behind me, then around me, and would stop in front of me. I would go around her, but she kept stopping after walking around me. I was getting nervous, so I got off the road, having been near the end of my miles and just walked out of the park. I still wonder what the deal was. Whatever.

In any case, people are what they are. Exercise is still a necessity for so many of us. It helps to keep us somewhat sane.

Like Great Barrington, New York has made its peace with the new COVID circumstances. There are lots of outside dining spots, complete with all kinds of heaters. Restaurants have partitioned tables with plexiglass separating the diners. We have a favorite, Bodrum, a superb Turkish place up in the Eighties. We got there for the lunch meal at about 3 p.m. and it was filling up. We started with calamari and then went our separate culinary ways. I had the stuffed cabbage. Unfortunately, my peculiar (mishuganah) diet doesn’t allow me to eat after 3 or 4 p.m., so it’s always great to find places open earlier in the day. Too many of our fine places in Great Barrington don’t open for lunch and that is very frustrating. My bet is that if they did, they would get a crowd, especially now that we are in tourist season. I have been stopped in the street to ask where people could eat. A word to the Great Barrington wise.

It is amazing how many businesses have closed up in New York. Some have survived but some have closed forever, it seems. This COVID thing will change all our lives. People will work from home, people will relocate. But in the case of many New Yorkers, they seem to be sticking it out. It’s a great city; Roselle is right about that.