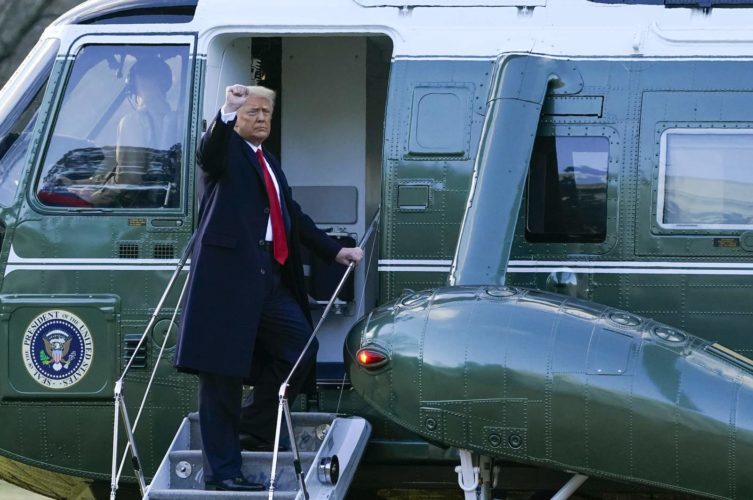 Today, the prime real estate on The New York Times’ homepage is taken up with news of Joe Biden’s incoming presidency, the plans for his inauguration, the history-making of his vice president, his cabinet picks, his plans to undo Trump’s legacy, and the photo essay tracing his long journey to the White House.

I’m not interested in any of that, now, just after 6 a.m. I read yesterday that Trump would be leaving town around this time, so I’m here for the live feed to watch him leave. Where can I watch him leave? Oh, you’re not playing that yet, internet? OK, well, where can I watch him preparing to leave? Really? Not that either? Well, I did wake up early and may not be thinking straight. Also, I’m annoyed. I want to know what he’s thinking, if he’s crying, who he’s calling, what he’s leaving behind, if there are agents in Florida preparing arrest warrants for his arrival. You can’t just leave me hanging. This has been a very long movie. But there is no word from ABC, CBS, CNN or NYT’s Maggie Haberman, who’s been Twitter’s most reliable source of Trumpian insider info, as though she’d implanted a microphone under his lapel.

Now it’s after 1 p.m. and I’m no longer hanging. He left. Well, first he talked, then he flew, then he talked some more, then flew off again. He’s gone. It’s a new day. Hail To the Chief, The First Lady, Marine One, Air Force One, the West Wing, the Oval Office, the Resolute Desk, the Rose Garden, press corps news briefings, presidential pardons, presidential tweets, and executive orders are all aligned with someone normal and boring now. I really didn’t believe it would or could come to pass. I’m still a little in shock. I don’t quite know what to do with myself. I don’t know how to land on two normal feet and place myself back in the normal world of November 7th, 2016.

When Trump was announced the winner in the wee hours of November 9th of that year, I had a vision of uniformed soldiers marching in formation down Route 41. That’s not how his administration started out, but it is, ironically, how it finished, with troops taking up the places where American citizens should be, protecting our capital city from the deluded mobs Trump spent his four years in office cultivating. Mobs attacking the Capitol was a fitting culmination to the Trump movie.

As someone wrote on Twitter yesterday, there’s not enough champagne in the world for the celebration that’s in order. But although I just watched the swearing-in ceremonies for President Biden and Vice President Harris (!!!!!) and heard the lovely songs, and the lovely poem by Amanda Gorman, and Trump is now, officially, irrefutably, a former president and Florida’s problem to manage, it does not feel to me that he has yet left our collective premises.

Everybody knows that stories don’t end with the climax. Titanic didn’t end with Jack frozen in the water, the final scene of The Godfather is the kiss of a ring, not a gangland murder, and To Kill A Mockingbird winds up not dramatically in the court room but quietly, on Bo Radley’s porch. We need a denouement, a coda, a wrapping up of things, before we find our way to the exit.

What and where is the exit to the last four years? An all-consuming conviction in an impeachment trial? A jail sentence meted out by the Southern District of New York? Radio silence from Trumpland? I’m sitting here on my couch wondering how to work all that out for myself. I want to know when the lights will come up in the darkened theater of Donald Trump so I can get on with other things.

I’m afraid he wired me in ways that will be hard to undo. There was the anxiety of him, the not knowing where he’d take us next, if he’d end up using the nuclear codes to take revenge on one of his enemies, like Massachusetts. There was the alternative reality morning when he had us all waking up exploring at length if “covfefe” was a word of great significance. There were the thousands of insults that had to have penetrated the armor of our souls. There was his abject refusal to take command of the Covid pandemic and stand on the side of life and health and science. Donald Trump the President was a one-man twenty-four-hour bad news channel. We rode along on the wave of his impulsive decisions.

I rode along, too, though I didn’t have to. I might have turned it all off. I know some wise, sane people who get to know the woods in the time I spend doom-scrolling. I might have kept the promise I made to myself on November 10th, 2016 to never voluntarily listen to his voice. But I didn’t. I listened, I watched, I read, I seethed. Trump took up a lot of emotional space in my life. This is going to be quite an adjustment.

Already, since mainstream social media cut him off two weeks ago, I’ve been bereft of scapegoats. Minus his Twitter platform, he put out a couple of disorienting video messages in which he read, surprisingly articulately, a clean script from a teleprompter about how of course he’s shocked and horrified and outraged by the violence of January 6th, after he’s spent four years requesting and rewarding such violence.

The videos weren’t really him. “Who’s holding a gun to his head?” is the only appropriate response to them. As such, they won’t work as a receptacle for my bad feelings. Where’s the man-baby Donald Trump I’ve come to depend on as the perfect receptacle for my bad feelings? Where is he, the most plain and indisputable cause for my stress and consternation and fear, my most convenient excuse for why I can’t get anything big done? Why am I not now, for instance, working on the book proposal I’ve had in the works for two years, and which I’ve promised myself will be forthcoming in 2021? Because I’m stewing about Donald Trump, of course. What’s my excuse after this rant is over?

Are we now expected to expect presidential earnestness and kindness and concern for others, and heartfelt tears of joy and of sympathy, and authentic displays of marital and filial affection? Wow. That all sounds a bit much. Nice, but a lot to take in. Time out. I need an interval, a denouement, a transition. The Trump story isn’t over yet. I don’t know how that movie will end, but the lights haven’t quite come up. I may even have to sit here in the dark after everyone else has left to process it all. Biden/ Harris has shifted instantaneously to President Biden and Vice President Harris, but I’m still a few steps behind. I’ll get there. There’s a bottle of champagne waiting in the fridge for when I do.

But in the meantime, man. What the hell was all THAT about?