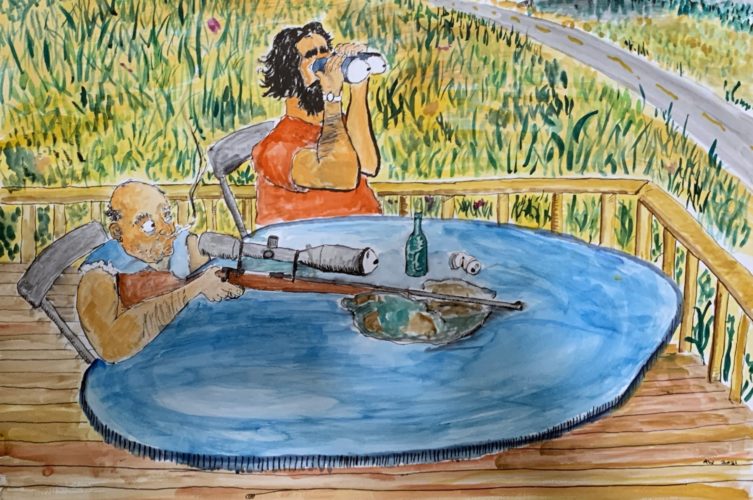 Nobody seems to have a good word to say about coyotes in Hancock, Massachusetts.

Not long after we moved there, a neighbor roared into our driveway in his red pickup truck to introduce himself and welcome us to town. He lived about a mile up the road and was just returning from his Saturday dump run when he spotted me in the yard.

The advice I got from this friendly, but wary, character was that I should never allow my son to go into the woods alone. And I should never go in without carrying a gun for protection. A rifle is preferable, but a pistol will do. This advice had me wondering for a day or two. But it did not bear up under scrutiny. A man at the Massachusetts Department of Wildlife assured me that the coyotes would keep their distance.

The big hunters in the area were our next-door neighbors Dave and Virgil, who lived with their widowed mother. They both took extended unpaid furloughs from their heavy construction jobs during hunting season so that they could have all the time they needed to bag deer on the land west of our homes that forms the Massachusetts — New York border. They even had a hunting blind on stilts high up on the mountain that their mother called their condominium. During hunting season, Dave and Virgil’s rifle reports were like the distant crack of a whip that we could often hear at our end of the valley.

While deer were Dave and Virgil’s game of choice, they occasionally went for black bears, which they would have made into sausage. And they shared the general enmity for coyote, or coydog as the locals call them. They went off into the woods on their all-terrain vehicles hoping to reduce the local population by one or two from time to time.

One autumn evening, while we were having dinner, Dave appeared at the door. “Sorry to bother you during supper.”

“No, thanks. I can’t stay. I just wanted to let you know that Virgil and I plan to shoot some coyotes tonight around dusk. We didn’t want to scare you with the gunfire.”

“Well, thanks for letting us know. Where do you expect to see these coyotes?” I asked.

“Right down there at the end of the field across the road. They’ll come out just before dark, and that’s where we’ll shoot them.”

Our adjacent houses are on State Route 43, a fairly busy road that bisects the town.

“So, you and Virgil will hide down there in the trees and wait for them?” I asked.

“Nope. We just sit on the porch and shoot them from there.”

My jaw dropped and my eyes bugged out in astonishment.

Aidan White (@aidanw1123) is a cartoonist and painter currently studying at the Massachusetts College of Art and Design in Boston.

Steve White lives in Great Barrington where he occasionally bestirs himself to work on a collection of mostly humorous personal essays.