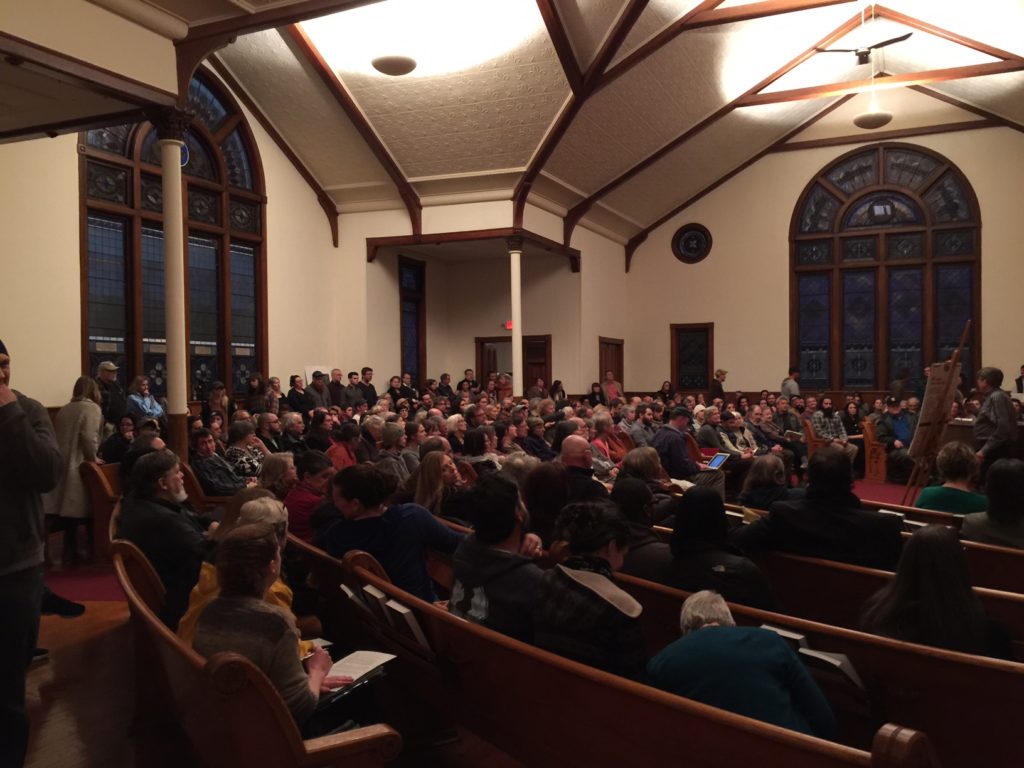 Heather Bellow
Between 250 and 300 people crowded into the Unitarian Universalist Church in Housatonic Tuesday night for a 'Stop the Dumps' session sponsored by the Housatonic River Initiative. Above, the audience listens to HRI founder Tim Gray.

Housatonic — They packed the church to declare holy war on the General Electric Company’s plan to dump toxic PCB sludge dredged from the Housatonic River into three proposed landfills, one them in the village of Housatonic adjacent to the river into which, for four decades, GE had let millions of pounds of PCB-laced oil seep from its Pittsfield transformer manufacturing complex.

Between 250 and 300 determined residents came to the Unitarian Universalist Church of South Berkshire to a Housatonic River Initiative (HRI) “Stop the Dumps” meeting to begin a grassroots process of blocking one of the world’s 10 largest corporations from continuing to despoil and mar a region that once embraced it for providing decades of jobs and security to Pittsfield residents. 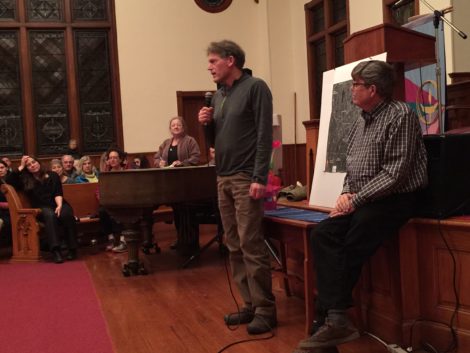 But those days are over. It’s been cleanup time since 2000, when GE was forced by the federal and state government to clean up its mess. Now the company has cleaned up most of the area around its former Pittsfield plant, where polychlorinated biphenyls (PCBs) once sloshed around factory floors before being discharged into the Housatonic River, streaming through groundwater and into soil for miles, and being dumped around the city. But GE is now in a standoff with the Environmental Protection Agency (EPA) over details of its “Rest of River” cleanup, since those PCBs traveled downstream, and into the floodplains, swirling contaminated sediment all the way into the state of Connecticut. Fish from the river can’t be eaten, you can’t swim in it, and the critters in that habitat have shown signs of harm.

“It’s a ghost of a river,” said one resident, Sage Radachowsky.

But GE doesn’t want the EPA telling it to ship the contaminated waste from the Rest of River cleanup to a certified remediation facility in Texas for $250 million more. It wants to drop it into three landfills instead — two adjacent to the river, and one in Lee near Goose Pond. The company already owns the land for the Lenox Dale and Housatonic dumps.

“It’s pretty simple,” said filmmaker Mickey Friedman, who made Good Things to Life, a documentary about the GE pollution saga. “It’s all about money.” 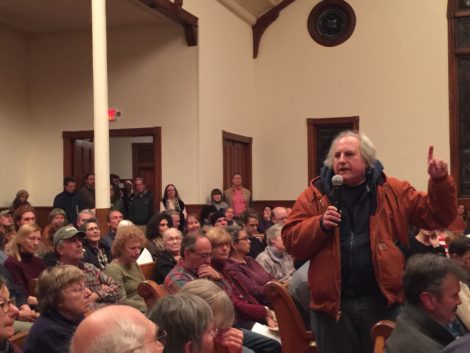 The standoff between GE’s legal might and a federal agency is a taste of what’s to come in keeping the dumps out. HRI Executive Director Tim Gray said litigation with GE is “not easy.”

“GE lawyers are very hard and they will fight us tooth and nail,” Gray said. “They can fight against EPA’s rules and regulations.”

If GE were to have its way, Gray said, it would just “leave the PCBs in the river.” The company is on a campaign to convince the public that cleaning the river will harm it, Gray added, noting that the sections GE already cleaned in Pittsfield are thriving. “They did a good job,” he said. Plants and trees are coming back, and fish are doing well. “This proves something very important.”

Gray said dredging is the only proven way, at the moment, to get what the EPA says are “likely” carcinogenic organic compounds out of the water, river floor, and river banks, and the EPA uses new technology making the process controlled and less disruptive to the river and its banks. “The EPA does it all over the country,” he said.

Ideally, the need for dumps will disappear with the advent of promising new biodegradation technologies, Gray said, and resident Nick Stanton, who has become a lay expert in bioremediation, explained how a protein concoction applied to contaminated soil can rouse native bacteria to clean soil and sediment by breaking down toxins. Stanton referred to the recent pilot project to remove dioxin contamination at 100 Bridge Street in Great Barrington. Though MassDEP shut the project down over several issues, the company that did the work, Biopath Solutions, has recent test results that show a success rate of 60 percent in certain areas, and 30 percent across the site. Biopath has eyed the river cleanup for some time, and is now engaging with the EPA in Michigan to use its technology on 89 acres in Kalamazoo. The company’s track record can be found here. 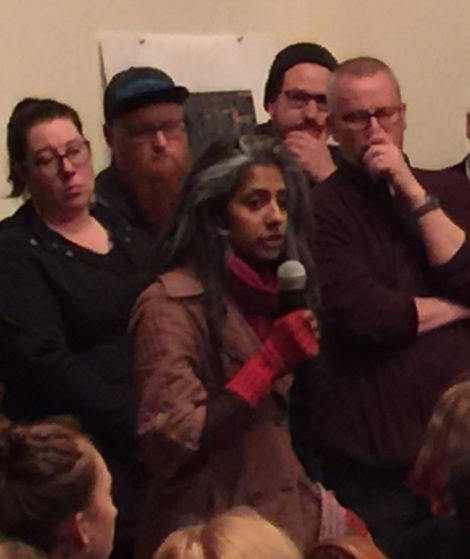 It doesn’t sit well with some that shipping out waste means a feared dump in someone else’s backyard. “Poor Texas,” Friedman noted, after mentioning another technique of doing away with PCBs: Thermal desorption, which heats the chemicals to high temperatures, producing a liquid that still needs special disposal.

And Pooja Ru Prema got up and said she didn’t like the idea of sending waste to what was likely a low-income community. She made a larger point as well. “Poorer countries cannot ship out toxics.”

GE may have legal prowess and the money to swim through endless seas of litigation. But the company will have its hands full dealing with Berkshire residents and local rules. “GE might own the land,” said an irate Jon Piasecki, “but we own the roads.” Piasecki further said tying GE up in regulatory knots might be the way forward to “add layers of complication, chaos and expense.”

But expense is nothing to GE, explained Gabrielle Senza, who told everyone $250 million was roughly GE’s annual advertising budget. And Ed O’Malley suggested all the nice tax breaks the company just got from Massachusetts after the company’s headquarters was lured to Boston by Gov. Charlie Baker and Boston Mayor Martin Walsh. Those tax breaks, O’Malley suggested, might help GE pay the extra money to ship the waste. And Stanton said he had done a little of his own figuring indicating the average GE investor wouldn’t even notice the difference to their dividends.

Others said the strategy is to hurt GE’s image. “Use the clean water card,” said Victor Canton. “GE is vulnerable to social media.”

Demanding the soil be treated rather than dumped would strike at the heart of GE’s “ecoimagination” campaign, Friedman added. 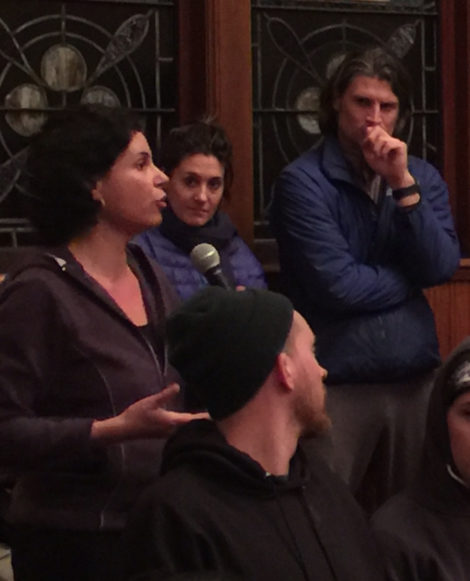 Others talked about sheer human pressure and volume. “We need to hold the [GE] CEO, Jeffrey R. Immelt, personally responsible,” said Maia Conty, of a strategy she said might be effective. “I’d like to invite his wife Andrea and his daughter Sarah, and connect as humans.” And if they don’t want to come talk, well, Conty said, we’ll just go down to his home in New Caanan, New York.

“If they don’t agree to meet with us,” said Ronnie Cunningham, “why don’t we have a sit in?”

“I’m someone who likes to make noise,” said Ron Blumenthal, offering to help gather people to attend meetings and events.

Gray said he’d like to take a crowd over to the new GE headquarters in Boston, when Stockbridge resident Denny Alsop completes his second canoe trip across the state as a petition for clean water, and to “elevate the river and rivers.” Alsop told the crowd he would launch from Bartholemew’s Cobble in Ashley Falls on March 21 and will hit Fred Garner Park in Pittsfield on March 28 at 11 a.m.

Housatonic Clean River Coalition’s Valerie Anderson wanted to emphasize that when writing to politicians, remember who the “bad guy” is. “The EPA doesn’t want dumps — it’s GE that wants dumps,” she said. “It’s GE, and don’t forget they moved their company to Boston.”

Speaking of politicians, Gray said “most of the politicians have gone running from this issue over the years,” but noted the presence of state Rep. William “Smitty” Pignatelli (D-Lenox). HRI has found most of its success with activism and “always doing something a little bit on the edge — we tend to get action that way.” 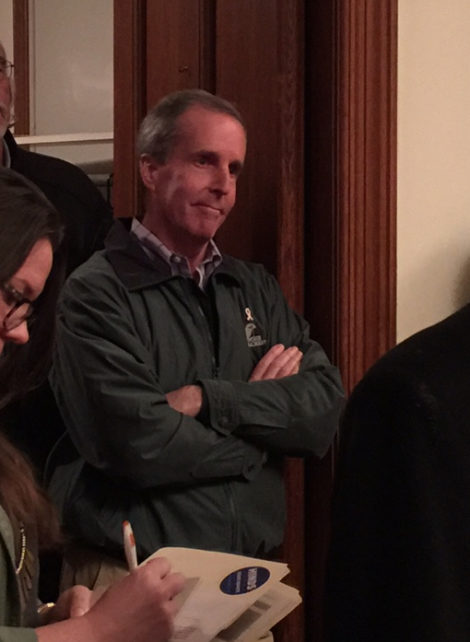 Pignatelli later told The Edge he was “pleased with the turnout,” and said it should come as no surprise that GE purchased 149 acres next to Rising Paper Dam in 2008 to cover its rear in case of future litigation by neighbors or abutters, since next to Woods Pond, Rising Dam has some of the highest PCB concentrations in the river. As alarming as the prospect of a dump here is to residents, Pignatelli said the position should be “no dumps in Berkshire County, period.” He added some perspective, by noting that it will take several years to resolve the impasse between GE and the EPA, and another 10 to 15 years to do the next phase of clean up. A dump in Housatonic is “decades away,” if GE should get their way, he added, and he is hopeful that bioremediation will eliminate the need for bank-to-bank dredging and dumps.

“We saw Hill 78 [dump] in Pittsfield next to a schoolyard,” Pignatelli said, “and now we see what we don’t want.”