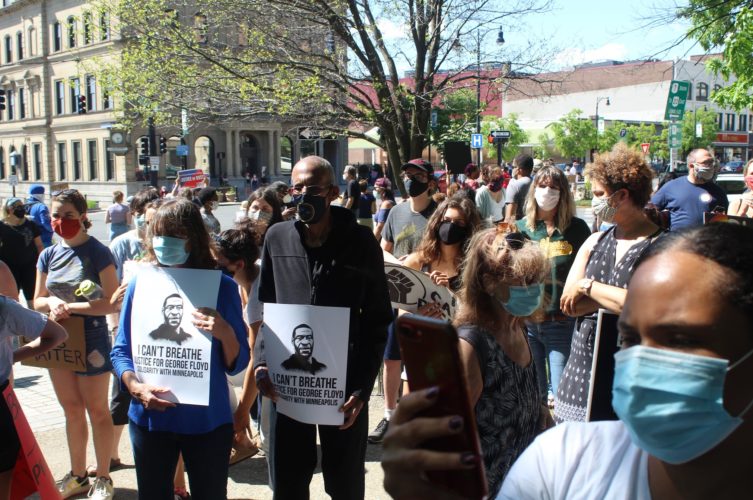 After the death this week of George Floyd in Minneapolis, Berkshire County protesters joined others across the nation as they flocked to Park Square in Pittsfield Saturday afternoon to protest police brutality. Photo: Terry Cowgill

Pittsfield — It was by turns, angry, tense, productive and peaceful.

A large crowd turned out for a protest today — one of perhaps hundreds in the nation — to register opposition to the treatment of African Americans at the hands of law enforcement authorities. The catalyst for this demonstration was the death in Minnesota of George Floyd while in police custody.

A white Minneapolis police officer has been arrested and charged with murder after being filmed on May 25 pinning Floyd on the pavement with his knee jammed against Floyd’s throat. Some of the ensuing protests across the nation have turned violent.

Today’s gathering in Pittsfield was free of violence. But dismay, anger and frustration were in abundance among the hundreds of people who jammed into Park Square. Most wore masks and complied with physical distancing rules set forth by the organizer, the Pittsfield branch of the NAACP.

The message came through loud and clear: the deaths of black men in police custody are becoming all too familiar, as is the ritual of gathering to protest them. Those who are horrified and angered by the deaths spoke of the pattern and the need to break the cycle.

“We have a chance to do something that’s called a movement,” said young community activist Jerome Edgerton Jr. “Right now in Pittsfield, let this movement start … We’ve got to keep pushing. We’ve got to keep going.”

Former journalist Roberta McCulloch-Dews, who is now director of administrative services for Pittsfield Mayor Linda Tyer, is the mother of three black children, two of whom are teenagers. She recalled all too well the death of Trayvon Martin in Florida more than eight years ago. Martin was not killed by an actual police officer but by George Zimmerman, a neighborhood watch captain in a gated community in Sanford, Florida.

“My kids were here and protesting, and my heart has been heavy because we consistently come back to this place, again and again,” said McCulloch-Dews. “This week .. I was physically sick. I was angry … so much rage inside of me because it keeps on happening.”

See video below of Roberta McCulloch-Dews:

Dennis Powell, who heads the Pittsfield branch of the NAACP, took the dramatic step of getting down on one knee to make his plea. Powell was channeling NFL quarterback Colin Kaepernick, who famously protested police brutality and racial injustice by “taking a knee” during the playing of the national anthem during the 2016 season.

Powell said he had grown weary of being a good citizen and practicing what he was taught while growing up, and still not be accepted by so many people in his own country simply because of his race.

“People don’t understand when I said I went to Africa, it was the first time I was accepted in my 74 years of life,” Powell said, raising his voice, both to be heard over the horns honking in approval and to express his anger.  “That’s sad. I’ve contributed much to my community and I’m still not accepted. My children and grandchildren are not accepted.”

See video below of Dennis Powell:

North Adams Mayor Tom Bernard, Pittsfield Mayor Linda Tyer and state Rep. Tricia Farley-Bouvier and Berkshire District Attorney Andrea Harrington also spoke. Harrington, who could not be heard over the blare of horns, had released a statement earlier in the day. It reads, in part:

“This incident is yet another example of both hate and a criminal justice system that is rigged against communities of color. I am disgusted that George Floyd was murdered, but I am more disgusted that his murderers clearly believed they would get away with it.

“A justice system the public cannot trust to be fair and equitable is a broken system. A complete investigation and commitment to seek justice for George Floyd is only a start in eliminating the bigotry and racism deeply ingrained in our society.

“The Berkshire District Attorney’s Office reaffirms our commitment to making long-lasting and formidable changes to eliminate bias at every stage of the criminal justice system.”

Asked for a response, Great Barrington Police Chief Bill Walsh referred The Edge to a statement from the Massachusetts Police Chiefs Association that was posted this week on his department’s Facebook page:

“The Massachusetts Chiefs of Police Association, representing police chiefs in all 351 cities and towns and most college campuses, denounces the egregious actions taken by four members of the Minneapolis police department, whether by action or in action, that resulted in the death of George Floyd on May 25, 2020.”

Police officers in the state have “thoroughly embraced” the six pillars in the final report of President Barack Obama’s Task Force on 21st Century Policing. Click here to read the six pillars.

Back in Park Square, there were musicians scattered around the green. There were so many attendees and the physical distancing requirements so daunting that the overflow crowd spread to North Street, South Street and to traffic islands to the north and south of Park Square.

To the surprise of some, there was not a heavy law enforcement presence. Pittsfield Police were patrolling in cruisers and one officer directed traffic for pedestrians as the event broke up.