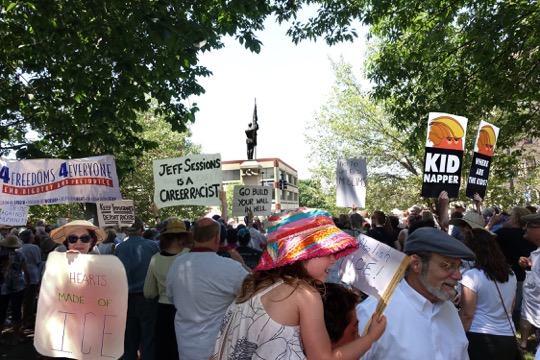 Pittsfield — Shouts, honking, and the sound of people singing, “This Land Is Our Land,” rang out across Park Square this afternoon from hundreds of demonstrators protesting the Trump Administrations brutal immigration policies — a reminder that, before coming to the United States, seeking opportunity and fleeing violence and persecution, the ancestors of most American citizens had made the journey to these shores from foreign lands.

Democratic U.S. Rep. Richard Neal addressed a crowd of roughly 500 demonstrators who had gathered at noon at Park Square in Pittsfield to protest Trump’s immigration policy. Standing in the center of the crowd of children as young as five and grandparents in wheel chairs braving the 90-degree heat, the congressman took the mic to deliver a simple message. “We need immigrants. We don’t need a wall around this country.” (See video below of Neal’s remarks.)

The rally was one of over 700 demonstration that took place across the country on Saturday as tens of thousands of people gathered to protest Trump’s immigration policy which has separated thousands of migrant children from their parents and detained families in cages indefinitely at the U.S. southern border with Mexico, and in other detention centers around the country.

The rally in Pittsfield was organized by The Four Freedoms Coalition, in partnership with the Berkshire Immigrant Center, the Berkshire Democratic Brigades, and the Berkshire County Branch of the NAACP amongst other groups. Pittsfield Mayor Linda Tyler, South Congregational Church Pastor Joe Huntington, Donna Morelli, an immigration lawyer for the Central West Justice Center, and Cambodian immigrant Sopheap Nhim, a former childhood refugee, were also in attendance and addressed the crowd individually. Their speeches followed a central theme advocating for a new, humane immigration policy, demanding an end to family separation, family detention, and Trump’s “zero tolerance” policy of prosecuting all migrants who enter the country without crossing through an authorized port of entry.

Protesters holding up homemade signs declaring “Deport Racists not Immigrants” and “Abolish ICE” stood in Park Square for over an hour, listening to the presentations and live guitar music—some joining in song and conversation with their fellow demonstrators. Jodi Greenberg, a Pittsfield resident at the rally said she was disgusted with the way migrant families were being treated.

“I don’t think it’s unreasonable to talk about abolishing or reforming ICE at this point” she said. Another protester, Ian Litchfield, expressed deep concern for people he knows in Pittsfield, saying that his neighbor, an undocumented immigrant from El Salvador had recently been seized by ICE and deported.

Scribbling on a square of pasteboard in red sharpie, “No Kids in Jail,” another protester, who wished for her name to be kept off the record, said she was encouraged by the size of the rally, but lamented that she had been to a demonstration in the exact same place last summer to protest Trump’s Muslim Ban, and that since then, “things have only gotten worse.” With many of the protestors people wearing white shirts, couples took pictures holding up signs they had made and those who didn’t feel like standing reclined in the shade or milled about the park as cars drove by and honked their support for the cause.

Standing on the curb facing the busy intersection, two brothers no older than 10 waved small U.S. flags shouted “No Deportation.” Their calls for change were just audible over the sounds of the traffic roaring by.