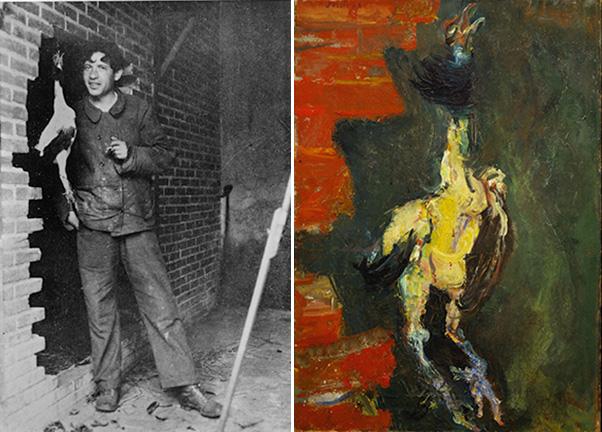 Artist Chaim Soutine and his painting of a chicken.

Midsummer is always a busy time for artmaking, and this summer the Housatonic Valley Art League, which I have been part of for many years, has no fewer than four different shows going on into early fall, right in the center of Great Barrington (between the Berkshire Bank and the post office, in the easily overlooked Masonic Temple building). The second one, the Midsummer Members Show, is currently on display through Sunday, Aug. 12, after which a new and quite different show called “Artist’s Choice” will open and then, three weeks after that, another very different show: “Small Works.” These shows are a great goad to productivity, and I am joyously engaged in a new subject, a mid-July bounty of flowers and fruits and burgeoning garden through my Egremont kitchen window, when I have to put brushes and palette away and head for Metro North to the city for doctors’ checkups and elderly maintenance.

But my days in New York turn out to be an unexpected and beautiful busman’s holiday. The Nathaniel Kahn documentary that I have been waiting for, “The Price of Everything,” about the obscene excesses of the current art world, is having press screenings. I eagerly grab a seat at one, and it’s as good as I thought it would be. Out in theaters in October (and as an HBO production, no doubt soon after that, on TV), it’s as smart, subtle and engaging as his film about his father (a distinguished architect who maintained two different families without either knowing). The new film presents an art world where art is treated like traded stock market acquisitions; where the grotesque, slick, empty work of Jeff Koons reigns—created factory-like by an army of young workers—with Koons making far more money than any artist ever has, while most serious artists still struggle just to survive. We meet a 92-year-old collector—still very sharp, with a touching Holocaust story if you Google his name—and who’s to know if love of art or commerce is primary for him. We hear at length from a woman who is chair of Sotheby’s fine arts division—smart, quick and mercenary—and from various artists and commentators on art. Larry Poons—old and shaggy in his paint-bespattered overalls, trudging through snow to his ramshackle upstate New York studio, going his own way and now making lovely-looking all-over paintings that remind me of abstract expressionist Milton Resnick’s work in 1959—may seem a cliché of the pure, romanticized artist, but he certainly stands in sharp contrast to the world of art hustlers making millions from buying and selling, flipping and trading, and corporatizing paintings.

And then, between doctors, my husband—painfully hobbling with what we think is sciatica—refuses to stay put and insists on getting out to an art show. He nominates the Soutine show at the Jewish Museum because the bus ride there is the most convenient. I have always loved Soutine—the vertiginous landscapes of Ceret at the Jewish Museum years ago stunned me—but the current show “Flesh,” which focuses on slaughtered and sometimesbloody animal carcasses, seemslike the last thing I want to see. But however reluctantly, I do go and, to my utter surprise, I find the show beautiful and devastating. The painterliness, the richness of color and of paint application, the frenzied sense of passionate engagement of the artist in every stroke, the distortions that only contribute more to the power of the paintings: It’s a joy to see all this, the distinctive and unique humanness of this art. But the subject matter is the horrific dying of animals, and you never forget the pain of that as you are delighting in this brush stroke or that unusual color placed there. And you wonder if this so Jewish painter was expressing past agony or his intuition, decades earlier, of what was coming. You remember his 1943 death, hiding—no doubt in terror—in France during the war, dying of an ulcer which he only dared seek treatment for at a very late stage, the car taking him to the hospital evading notice by taking a round-aboutroute,at the end of which he was dead at 50.

He grew up in poverty and, when he made his escape to Paris, he lived in even more terrible poverty thereuntil Barnes of Philadelphia discovered him (what an amazing man, to have understood so early) and bought huge numbers of Soutine’s paintings. Soutine was the 10th of 11 children and his father mended clothes of the poor (for what kind of living?) in some little tragic shtetl in Lithuania, anti-Semitism all around, brutal pogroms during his growing up. At home his brothers endlessly beat him up for doing art, kept him from what pitiful food there was, to punish him. And doubtless, memories of orthodox Jewish ritual animal slaughter, seenclose upby a sensitive horrified child, must have also figured into this work.

But what is astonishing is that such brilliance seems to have arisenout of nothing at all. How did he believe in himself enough to fight his way out, to find another life, to Vilnius and then to Paris, ultimately to a world-class art all his own and unlike anyone else’s—an art that made a huge impact on the American art world when it was first seen at MOMA in the 1950s. Chaim Soutine was a miracle in many ways, and a very Jewish one, and, though I am totally secular, little engaged in Jewish history, my whole large family was murdered in their Polish shtetlby the Nazis, and this Jewish Museum show speaks to me on levels I never anticipated. It is also a very brave show. The largely Jewish attendees this museum attracts, often from suburbs, seem as little likely to be attracted by bloody carcasses as I was. I have been grateful for past brave shows here—like one of Chagall’s work, not as it became sweeter and more popular, but during World War II as he was agonizing about his shtetl and what was happening to it, the paintings showing a recurrent crucified Christ wrapped in a Hebrew religious shawl. That show opened up a whole new sense of Chagall as artist and person, and this show is equally important and eye-opening; it has greatly deepened my feeling for Chaim Soutine’s work and it has reminded me of a tragic history that is also, in some way, mine. Soutine’s tender, fiercely passionate representation of the world’s violence vented upon the helpless, his sense of helpless suffering, calls to mind the French film director Bresson’s donkey in that holiest and greatest of films “Au Hasard Balthazar.” Indeed, the very last paintings in the Soutine show, made in the mid 1930s, are the most tender and dear portraits of living animals: a goat, a calf, two pigs lying together. As his life became more perilous, it felt as if he were blessing life.

I return, eager to pick my brushes and go back to my own very small way of blessing life: with my Berkshire garden, with Taft Farms’ cut flowers and with preparations for new paintings for the next two HVAL shows. I hope people will come see them even though we don’t feature glittering plastic bunnies like those of huckster Jeff Koons, nor tortured dead rabbits like those of the profound Chaim Soutine!

The Soutine show is on through Sunday, Sept. 16.