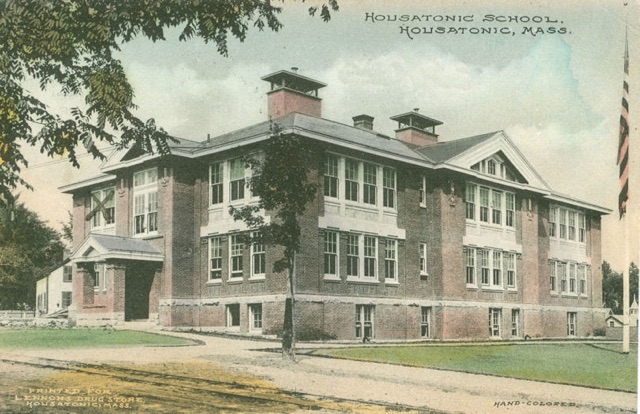 Housatonic — It is a stately stone stalwart of education, set into the heart of a village and built in the style that served as a metaphor for what — near the turn of the last century in America — was believed to be a school’s mission.

But the former Housatonic Elementary School, once surrounded by bustling mills and commerce, has fallen from its sturdy past of educating scores of mill-workers’ children and many more after the mills shut down. Like the former Searles and Bryant schools in the center of Great Barrington, the Housatonic School was the victim of a changing economic and education landscape. It has remained mostly empty since 2004, when the local elementary and middle schools regionalized into the Berkshire Hills District, into its two new buildings on the Monument Mountain High campus off Route 7. The school district offices moved out of the Housatonic School, too, when it learned that the school might have new inhabitants — but never did — creating a hint of controversy over the district’s paying for space in the Stockbridge Town Offices.

What to do with a prominent public building sandwiched between two public spaces? On one side is a popular playground/park on the other, a beloved community center/gym known as the Housiedome.

When Town Manager Jennifer Tabakin announced last week that she will create a new and broad RFP (Request for Proposal) for the school in an attempt to sell it, many wondered why it had taken so many years to do something about it, especially since the last two school task forces — among other groups — worked hard to make recommendations for its use based on public opinion. Town Manager since 2013, Tabakin recently got the Searles School back on the tax rolls, will auction off foreclosed properties, and appears to be attacking each town money sink one at a time.

Since the school emptied out 10 years ago, a steady stream of residents and one or two organizations have made advances towards possible uses for the building, but according to a Berkshire Hills analysis in 2005 it would cost $901,200 to bring the building up to code.

Nothing has taken flight. Back when the Housatonic Visioning Task Force formed in 2004, the focus was less on the school itself since the school administration still occupied the building. In a report called “A Plan for the Housatonic Village Common,” the task force wanted to make the area more pedestrian friendly, more functional and aesthetically pleasant while preserving Housatonic’s “unique working class character.” The report expressed concern about gentrification like that found in Great Barrington and other towns.

Many still wonder why the Berkshire Hills administration left the building. Douglas Stephenson was chair of the Board of Selectmen back when the district moved its offices. Stephenson said selectmen were “trying to negotiate with the school committee” about a lease. He said it was a “difficult” process, and the school committee said “they were not ready to negotiate a long-term lease yet…next we heard they negotiated a long-term lease with Stockbridge.”

School Committee Chair Stephen Bannon has a different memory. He said the district offices were asked to leave the school building when the “Selectboard Chair at the time” told him a coalition of artists were moving in and the Board “wanted us to leave as soon as possible.” Bannon said he took the Chair at his word.

Stephenson said there had been “15 to 20 ideas floated,” for the building, “but just ideas,” he added. “There was never a plan. For it to be a plan there had to be financials to go with it.”

Eventually there were two RFPs for the school put forward by the town, a few plans and proposals, but nothing ever stuck.

Multicultural BRIDGE, a non-profit promoting cultural understanding between diverse populations in the Berkshires, resided there for a few years, and eventually moved to Pittsfield. BRIDGE Executive Director Gwendolyn Hampton VanSant founded BRIDGE in 2007 and said she sent a proposal to then Town Manager Kevin O’Donnell, “not knowing about the RFP…we wanted to stay there but the building needed a heating system,” among other things. VanSant said she had heard of a retrofitted former elementary school in North Adams that had been grant funded through town assistance.

“That was a model and we wanted [Great Barrington] to support us to make [the school] a nonprofit hub,” she said. From the first floor of the school, she said, BRIDGE created a “lively” scene. “We ran classes, we had a secondhand clothing store, taught Spanish classes…we had pretty good traffic and had done summer programs for kids.” BRIDGE was paying a small amount of rent and bartering by giving town workers “cultural confidence” courses. “But some people thought we were freeloading.”

In response to the first RFP, the Community Development Corporation of South Berkshire(CDC) in 2010 submitted a fully fleshed mixed-use plan that included 11 units of affordable housing, and commercial space, including space for nonprofits and even a satellite office for police, said Executive Director Timothy Geller. The Selectboard asked both the CDC and BRIDGE to see if they could work together and come back with a joint proposal, Geller said. Some of each organization’s board members had positive talks, but when they came back to the Selectboard, Geller said, O’Donnell “pulled the plug with no reason given.”

Sean Stanton was chairman of the Selectboard at the time. He said it is his recollection that “there was a desire on the part of Selectboard and possibly the task force, to do more than what they [CDC and BRIDGE] were trying to do.” Stanton said when the CDC and BRIDGE came back to the Board they had not “come up with a proposal that was workable.”

“Unless somebody comes along with a vanity project,” Geller said of the town’s current plan to aggressively market the building and post it on Opportunity Space. “I don’t think there are that many options for it. But I think the idea of the town spreading a wide net for the building is great.”

Gallery owner and Housatonic resident Lauren Clark remembers when the Housatonic School was about to close. Her daughter was a student there, and Clark’s gallery was right up the street (she has since moved it to Railroad Street in Great Barrington). “I got together with all my artist friends in town and said, ‘we need to band together to make sure we’re in the loop when things happen if we want it to be an arts oriented place.’ ” That was how AHA (Association of Housatonic Artists) was formed, Clark said, and it was at this time a number of other groups began to talk and meet. But at some point there was “all this contention,” Clark said, when another group had different ideas for the school and AHA “somehow slipped off the email” list for the other group.

“They had been having meetings,” and not inviting AHA, she said. “They saw us as renegade artists trying to take over the town.”

All this was before the second task force took root, Clark said.

The Housatonic School Campus Task Force was born when former Town Manager Kevin O’Donnell suggested it as “civic engagement” to assess “public interest and public opinion,” said member and current Selectman Dan Bailly, one of 11 task force members. The task force made an official public survey that went out to Housatonic and all of Great Barrington, said member Kate Hold. It had a response rate of 400, she said.

“People wanted the school to stay in town hands,” Clark said of the survey. “They weren’t against selling the building, but wanted to keep control of it. People were worried about their taxes, but the building was never on the tax rolls. At the time it was costing $40,000 per year to keep it from falling apart, and then it was $50,000.” The task force completed its work at the end of August 2011 and presented its recommendations to the Selectboard. “Nothing happened,” Clark said. “We did all this work and the Selectboard never did anything with it.”

Last year, she added, “it was mothballed.”

What came out of the survey and public meetings, according to Clark and Hold, was that people did not want low-income housing in the building, that “it would change the flavor of the center of town,” Clark said. “It was nothing against seniors or low-income,” residents, she added, but it was the central location of the building that made it seem inappropropriate to such use.

Also, Dan Bailly said, the village is “off the beaten path,” and “the location is a problem.” The school is “wedged between two public spaces that aren’t going to be anything but public spaces.” In the new RFP, Tabakin wants to “define the boundaries, so you know exactly what piece of land you’re getting,” he added.

Bailly said the almost 20 percent response from the public survey “was more participation than town meeting. The community didn’t want housing…the general overtone seemed to be to keep the building public.” Bailly said the task force was charged with “putting on paper what the community was telling us.” He said there was “lots of respect” among task force members. “No one tried to force ideas…”

The task force’s findings were eventually weaved into Great Barrington’s 2013 Master Plan with a “strong recommendation” against housing at the site. There were three options added: The first was a “community partnership with the town using the building,” a “public private partnership,” or a “campus revision including demolition of the building if the first two options cannot be realized within the next three years (i.e., by the end of 2014).” The cost to raze the building would be $400,000, according to the task force.

It appears optimism has prevailed.

Still, it was this lack of action on those recommendations over the last few years that gave Bailly an extra push to run for Selectboard in 2013. He said he has tried to keep the school on the Town Manager’s “radar,” so that what has been done by the task force isn’t “ignored.”

“I was really involved in this and I really care,” Clark said, and she still wonders why a widely circulated RFP wasn’t done in three years.

As for BRIDGE, VanSant said the fervor surrounding the school building “got a little too charged for me to participate.” The town, she said, ended BRIDGE’s lease when O’Donnell left. “We were sad — we wanted to have our organization keep up that vibrancy in the building and make it non-profit hub — we weren’t up for political battle.”

And would the CDC ever consider another proposal? “It would be largely what we had before,” Geller said. “Mixed use commercial and housing. It’s a perfect mixture for village center development. You want 24-hour, 7-days-a-week use.” The CDC, he said would approach the complex property “with historic tax credits and affordable housing development subsidies — and you could still have half the building for some kind of commercial.”

“The heart of the question,” Geller said, is “how do you make it financially feasible? How do you make it code compliant and then turn it into something that generates money? It’s the same question with any retrofit. It has to be financially viable and it has to be a positive impact on the village. Any entity that can do those two things…we all should be greasing the wheels for them.”