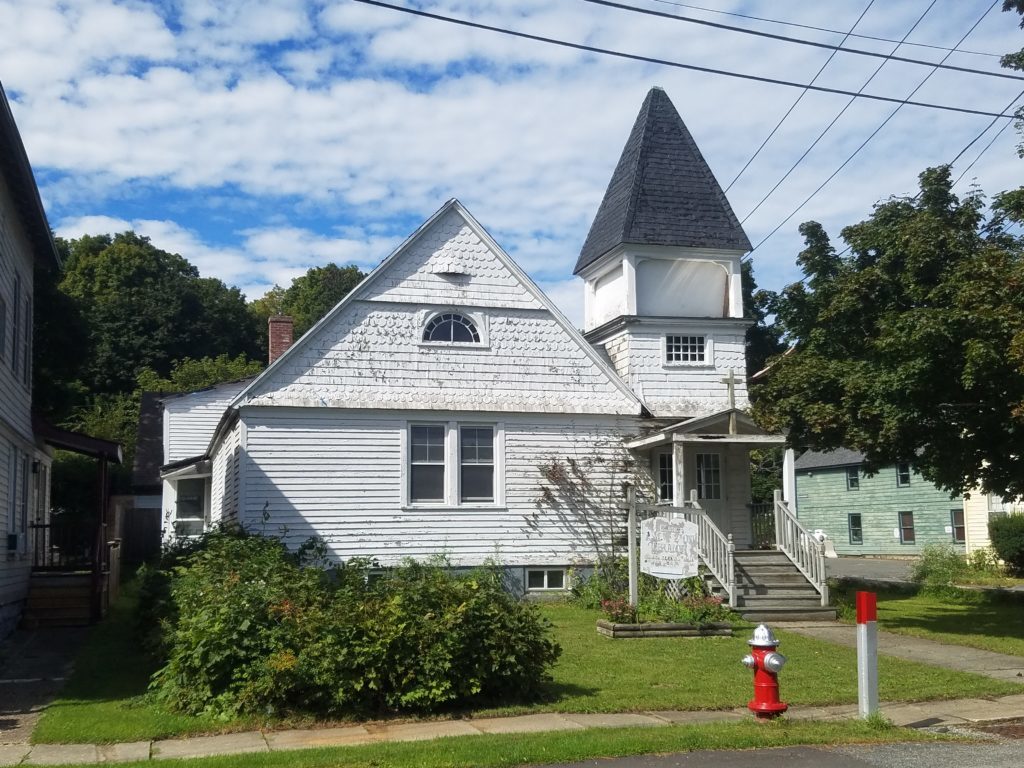 Great Barrington — Blaze orange ties, secured to low-lying wires at the top of Elm Court, identify the corner lot as a construction site; this, coupled with an African American Civil Rights Grant — to fund interpretive exhibit design at the historic Clinton A.M.E. Zion Church — are sure signs that the years’-long project is indeed evolving on schedule, despite the standstill experienced across much of the Berkshires’ since COVID-19 settled in mid-March.

As July drew to a close, the Upper Housatonic Valley National Heritage Area announced receipt of a $50,000 grant from the Department of Interior’s National Park Service funded through the Historic Preservation Fund’s African American Civil Rights Grant program. Located in downtown Great Barrington, the former church is being restored for adaptive reuse as an African American visitor and cultural center that will educate the public about the life and legacy of civil rights pioneer W.E.B. Du Bois as well as serve as a focal point for the presentation, interpretation and documentation of African American history in the Upper Housatonic Valley.

“Dr. Du Bois wrote about the central role of the Black church in the life of the community — something he first witnessed right here in Berkshire County,” said Frances Jones-Sneed, Ph.D., a member of the nonprofit’s board of directors. “This funding will help us develop interpretive materials to educate the public about Great Barrington’s first Black church and its foundational role in the life of this pioneering civil rights leader.” Housatonic Heritage executive director Dan Bolognani voiced appreciation for the funding, noting that ongoing support from the National Park Service is a strong signal of the project’s importance. “Clinton Church served as a hub of faith, action and social gathering for the Black community for more nearly 150 years,” Bolognani said. “Returning it to the center of community life in the hometown of author, scholar and NAACP co-founder W.E.B. Du Bois is vital. Housatonic Heritage is pleased to play a pivotal role in this important and historic undertaking.”

Housatonic Heritage has played a pivotal role in the restoration of the historic church, working with the nonprofit Clinton Church Restoration, which owns the deconsecrated church, since its formation in 2016. Wray Gunn, chairman of the Clinton Church Restoration organization, called the grant, “a milestone for the CCR to continue its mission to restore the iconic Clinton AME Zion Church for community use.” Gunn, who celebrated his 90th birthday in March, has had deep ties to the historic church, which was once attended by Du Bois, for nearly eight decades. He offered “thanks to all who have given of their time and efforts to get this grant.”

The Historic Preservation Fund grant was welcome news as the CCR project is poised to make significant progress in the needed “brick & mortar” repairs. Bolognani alluded to the grant’s timing as auspicious, “[coming] along at exactly the right time, as we were just completing the critical public-input process and background materials that will inform the reconstruction process.” This is the second African American Civil Rights Grant the project has received. The first provided $388,508 for stabilization work at the National Register of Historic Places property, which is currently under construction. CCR recently completed an interpretive planning process led by the exhibit design firm of Proun Design, and scholar/historian Kendra Field, Ph.D. To date, the pandemic hasn’t negatively impacted the administration of federal grants in partnership with the National Park Service. Bolognani said that while the grant funding they are currently working with was appropriated in 2018-19, “it remains to be seen what the next grant programs may look like.” As for project-related delays on the ground, they appear unrelated to the pandemic; Bolognani categorized them as, “mostly due to additional, previously undiscovered water damage to the [existing] structure, thereby prompting additional engineering, shoring and structural work” to the building that first opened its doors in 1886. Financial support for the ongoing project remains of particular importance, as much of this new work had been neither planned nor budgeted for.

The United States Congress officially designates national heritage areas and funds them through a partnership program with the National Park Service; there are 49 designated heritage areas, including Housatonic Heritage, the mission of which is to illuminate the diverse, rich identity of the upper Housatonic River valley region and to preserve and promote its historical, cultural and natural resources. The National Park Service African American Civil Rights Grant award is part of $14 million awarded to 51 projects in 20 states that preserve sites and history related to the African American struggle for equality in the 20th century. While the NPS provides funding and technical expertise, its belief is that the work and success of national heritage areas lies squarely with the citizens of the area. At present, the ongoing story of Du Bois and his legacy is unfolding through the town of Great Barrington, thanks to signage at places significant to Du Bois as a youth (his boyhood homesite is on Route 23 headed west toward Egremont) and later in life. The CCR project, when complete, will complement the W.E.B. Du Bois in Great Barrington, currently a self-guided walking tour and motor tour fueled by the vision to place Du Bois prominently in the downtown landscape. For more information, visit www.HousatonicHeritage.org.