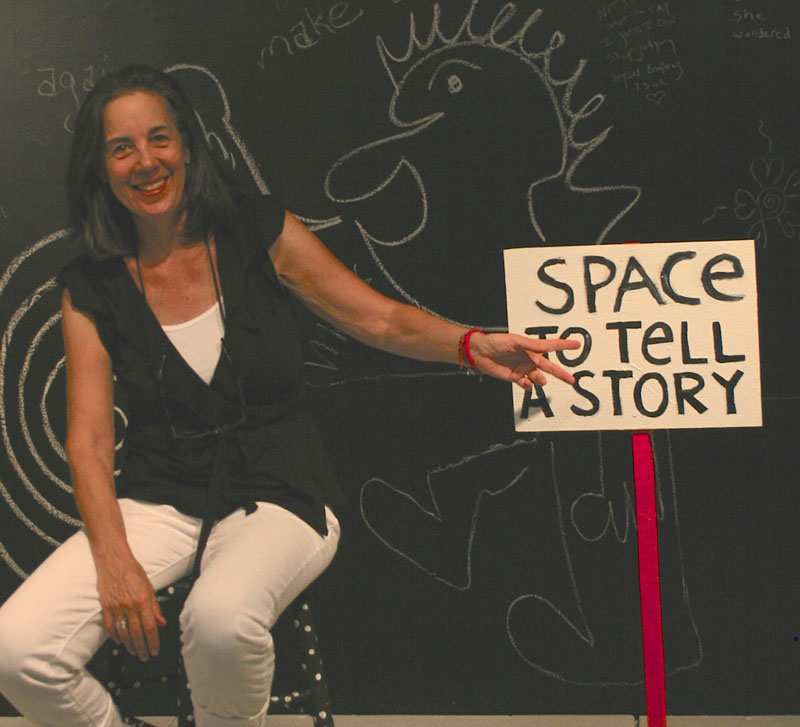 Artists Deb Koffman at the opening of her show 'Make Space for All You Need' earlier this month in Housatonic. Photo courtesy Deb Koffman's Art Space

Housatonic artist shows how to ‘Make Space For All You Need’

Housatonic — I stopped by Deb Koffman’s Art Space on Tuesday afternoon to find it deserted. Save for the rhythmic whir of a lone ceiling fan, the audible tick of a wall clock and the persistent hum from an invisible source, the space was refreshingly empty. Having just hiked Monument Mountain in the midday heat, I was thankful for a moment’s respite; moments after latching the door behind me, my heart rate immediately slowed to a comfortable pace while I resumed regular breathing. “This,” I thought to myself, “is how meditation must begin”: by simply slowing down enough to take pause and notice. 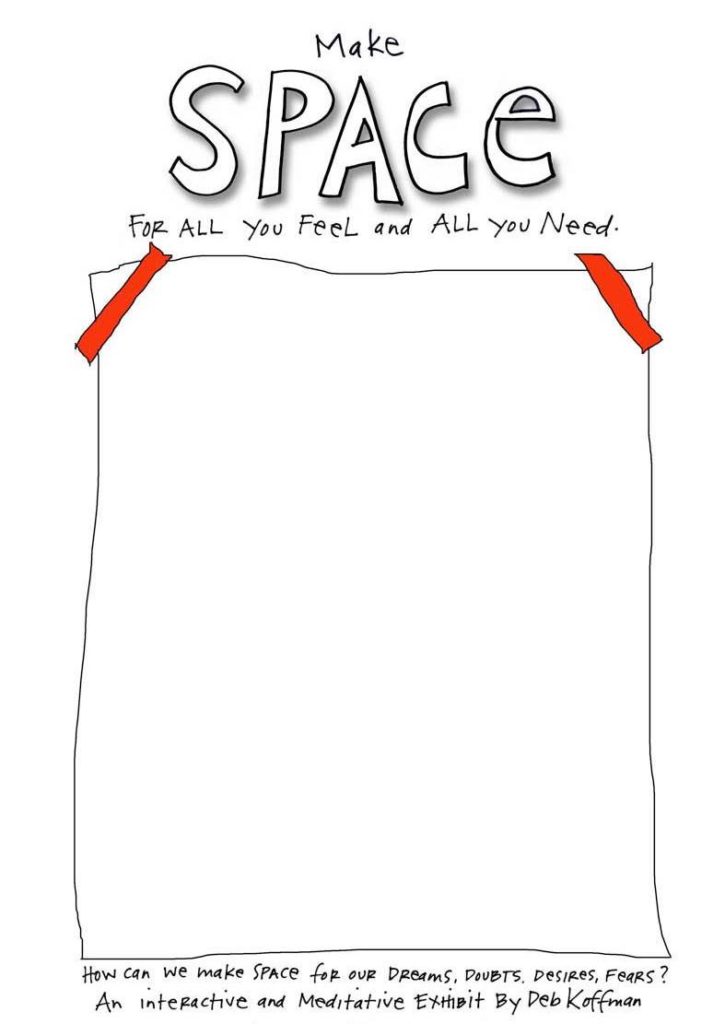 This is the premise behind Koffman’s new show, “Make Space For All You Need,” an interactive and meditative exhibit on display through September at her Front Street gallery. “Just standing in front of a blank canvas guides us to slow down,” said Koffman in a recent phone interview — a refreshingly simple albeit profound approach to the persistent human condition of having feelings and what to do with them. For Koffman, who has been a staple in the creative hamlet of Housatonic for three decades, the idea sprang from her own need for space. Early on in her career, Koffman describes her work as being “very personal, about me learning how to make space for my own feelings, thoughts and being in my own self. Thirty years later, it’s way relevant for everybody,” she explained.

If you’ve never ventured into Koffman’s gallery, you really must. The whitewashed industrial space is punctuated with splashes of characteristic Deb style: There is a round pedestal table with a base that bears the black outline of human legs wearing red shoes; there is a black and white spotted stool; a jauntily striped garbage bin is tucked behind the door; and there are dozens upon dozens of cards, posters, books and Soul Support cards on display. In Koffman’s characteristic black and white, punctuated by red masking tape to mark the corners, the artist has cast her focus on what most of us need in today’s technology-driven, multitasking, over-scheduled world: space.

“People are rushing around doing things and don’t think they have time for themselves,” is how Koffman sees it. And she is speaking from personal experience. “Simply the act of going into a gallery or museum to look at art … there’s something inherently obvious about the need to take time and space to observe what’s in front of us,” she explained. For those who might be uncomfortable with all the blank space, Koffman has created a guided meditation of sorts, one that invites visitors to make their way through the various spaces she has created for exploration. Several signs lead the way: There is “Space To Relax” beside a pair of carved, high-backed wooden benches; there is “Space To Think Anything” beside a trio of floating dialogue balloons; there is “Space To Move Freely” as designated by a black and white circular outline on the floor; and there is “Space To Tell A Story” on one enormous wall that has been painted with black chalkboard paint. 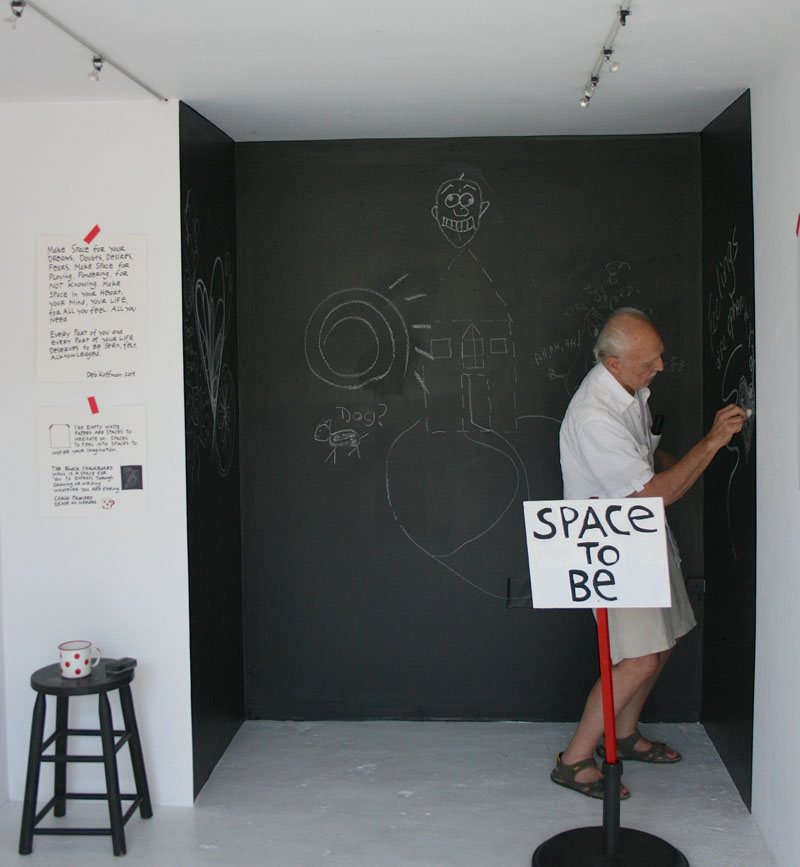 “Something in me wanted larger white space for myself,” explained Koffman. “I needed the quiet. There’s something about a physical room that contains me. When it’s empty, white space grounds me; it comforts me,” she added, which means it was a big deal for her to paint the wall black — something she calls a risky move in the creative process. Once Koffman created meditative space, she quickly recognized the need for active space (hence the large impromptu dance floor inviting movement of all kinds). In short, everything grew out of Koffman giving herself room to make a show. The result is both spontaneous and beautiful.

“My work is telling people that it’s ok to take space for all your feelings,” said Koffman. “Complain, go ahead, but put it on a piece of paper. Make it visual,” she implores others, pushing further on a hot-button topic: “Take the space to be angry … on a piece of paper, on the dance floor, on the wall — don’t shoot someone,” she said in a nod to the news, which undoubtedly affects her and her work. “It makes me crazy to think that people don’t have appropriate places [to express their feelings]. Many don’t even know that they have these feelings,” she said in a nod to the smaller pieces on display in her Little Gallery. There, the walls are covered with blank, white paper — fixed to the wall with red masking tape — with guided prompts to help the viewer move through the exhibit. Koffman has made space for myriad emotions that run the gamut from “Space To Be Lonely, Lost, Uncertain” to “Space To Be In Love”; one of my favorites was “Space To Be Mad” followed by “Space To Be More Mad,” and I was intrigued by Koffman’s take on the topic: “There are so many other places to express ourselves than violence,” she said. “If we really, really helped each other to express ourselves in safe and appropriate ways, just imagine that —” she said before trailing off. “Doing this physically, literally, making space [for others] to express themselves in artistic ways [is] very healthy and it creates community, and it’s healthy, and it’s good,” she added. 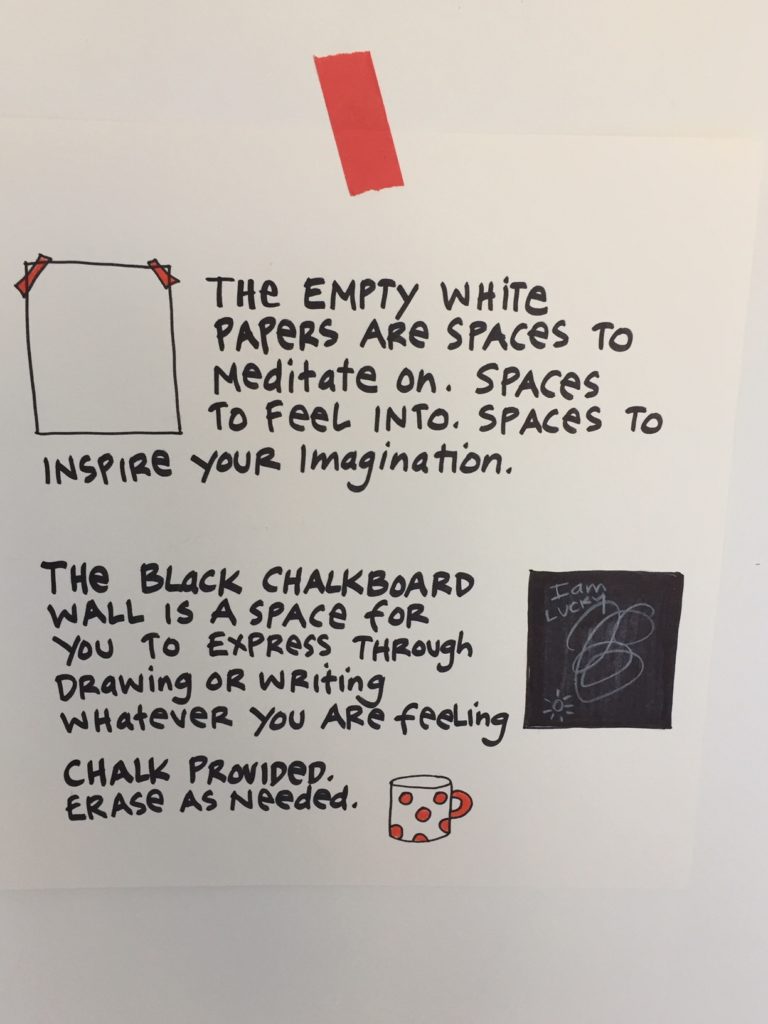 Jeff van de Visse sees Koffman as someone who not only creates but also generates powerful good with her studio. “The [exhibit’s] experience curiously persists,” he shared in a recent statement after attending the opening. “[Deb] translated a 2D piece into 3D. It held its focus, and added a dimension. Inclusion eliminated we spectators’ safety net. Toe-dabbling, first steps, just to think about a ‘free act’ in what feels as space expanding. Thinking is intimidated facing such Wilderness. The kick I found, the space grew huge and the interactions grew intimate, a singing drum and a dancer, stories shared, as if around a campfire.”

“Deb Koffman’s new show is about creating the space inside to live authentically through whatever any given moment brings. Space to acknowledge and embrace the multitude of feelings that cascade through us in these challenging times. As imperfect and creative humans, Deb’s interactive show invites us to practice accepting/loving ourselves. I need all the reminders I can get and Deb’s ever-accessible art gently does just that,” said Jeanne Bassis of PlayReflections.

I, for one, am glad I made time — and space — to see Deb Koffman’s show. I was having a crazy day, one that was ostensibly thrown off by a hike that took longer than I anticipated, which meant my daughter got to an appointment later than I had wanted. I almost bagged driving to Housy. I’m really glad I persisted, as I stumbled upon a safe space to tune into myself, which is precisely what I needed, coupled with time to relax and rest in what I saw and felt. It is, at its very core, the essence of Koffman’s invitation to all of us: “Make SPACE for your dreams, doubts, desires, fears. Make SPACE for playing, for pondering, for doing nothing. Make SPACE in your heart, your mind, your life for all you feel, all you need. Every part of you, and every part of your life, deserves to be seen, felt, acknowledged.” Deb Koffman makes art to understand, reflect and honor her emotions and thinking patterns; she is the author of more than a dozen books and her space has been a sanctuary for more than three decades, hosting IWOW and mindfulness drawing classes as a way of inviting connection and building community. Her gallery is open by chance or appointment, or at debkoffman.com.