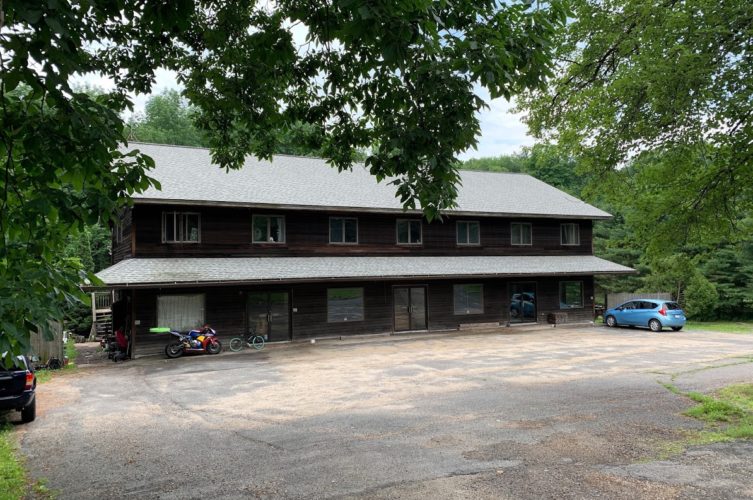 The exterior of the former Home interior design building containing two upstairs apartments on Route 23 in Egremont. A Holyoke developer wants to renovate the building and turn it into a cannabis store. Photo: Terry Cowgill

Egremont — A virtual informational meeting Thursday night about a proposed marijuana shop on Route 23 evolved into a three-hour marathon, with dozens of neighbors and other residents complaining at length about traffic, safety and other concerns.

Emerald River, a limited liability corporation formed last year by Morriss M. Partee and Matthew R. Moriarty, both of Holyoke, proposes to open a marijuana store at the former Home interior design shop, across the road from the western intersection of Route 23 and Taconic Lane.

See the Edge video below of the virtual community outreach meeting hosted by Emerald River LLC:

The store would occupy 2,800 square feet. Partee emphasized that the business would be equipped with all the security requirements mandated by the Cannabis Control Commission, including 24-hour video surveillance, access-controlled doors, motion detectors, alarms, fencing, limited access and onsite security personnel.

Partee said he expects to employ 12 to 18 people, including “budtenders” and a variety of managers for security, compliance, purchasing and store operations. Emerald also plans to refurbish both the interior and exterior of the building. In addition, there will be a plan to prevent diversion of the product to minors. Click here to view Emerald’s slideshow presentation.

As required by the CCC, Emerald must negotiate a host community agreement with the town of Egremont. Those agreements typically include a provision stipulating that the town receives the equivalent of 3 percent of the store’s gross sales. In addition, the town has enacted an additional local-option 3 percent add-on to the state excise tax.

The previous business, Home, has closed but there are two occupied apartments upstairs. Great Barrington attorney Peter L. Puciloski, who represented Emerald at the meeting said the tenants would most likely be relocated with the assistance of the company.

Others questioned Emerald’s business model and asked for financial information about the company, along with expected sales and revenues, but Partee demurred. Puciloski said that information was privileged between Emerald and the CCC.

Others asked about Partee’s background. Partee said he was a marketing and social media specialist who in 1999 launched EverythingCU.com, an online community for credit union professionals.

Partee has lived in Holyoke for many years, while Moriarty is a Holyoke native. That municipality is one of 29 in the state designated as an “area of disportionate impact,” meaning that Holyoke has been “disproportionately harmed by marijuana law enforcement.” That designation gives Emerald priority review in the licensing process before the CCC even though the company is proposing a store in Egremont.

Partee said he had tried to start a store in Holyoke but the property he had planned to use fell through. Emerald also currently has five other license applications before the CCC, and another application for a license in process with the Maine Office of Marijuana Policy. Emerald also holds precertification from the CCC for marijuana establishment delivery, which is available to Economic Empowerment applicants and Social Equity program members.

The project will require a special permit from the town planning board. If all goes well, Partee hopes to obtain that special permit and receive site plan approval by the third quarter of 2020, complete the renovations by the end of the year and open the store within three months. He expects about 150 customers per day.

Roughly 70 people attended the meeting via Zoom. An unknown number listened by telephone conference call. Most were quite skeptical of the proposal and many were residents living in the nearby Taconic Lane subdivision. Some were parents of schoolchildren who were concerned about the increase in traffic the store would bring to an area that includes a school bus stop.

The proposed store is only a mile and half from the border with Hillsdale, New York, and neighbors are concerned that Emerald’s new store would dramatically increase traffic on Route 23 because recreational marijuana sales are not yet legal in New York. The intersection with Taconic Lane has limited sightlines, is dangerous and is already the scene of many vehicle crashes, they said.

But Partee threw cold water on that concern, asserting that traffic through most of Egremont would actually decrease. Currently, most New Yorkers who drive to Theory Wellness, the only recreational cannabis store in South County, use Route 23. After Emerald opens, most of those customers will drive no farther than the westernmost reaches of Egremont and will not proceed through the densely packed corridor of the village of South Egremont.

What happens after the five other planned stores in Great Barrington open is anyone’s guess. In addition, the Pass in Sheffield is slated to open later this summer. Partee’s hypothesis elicited laughs from some of those in attendance.

There were also complaints that, beyond tax revenues, the town would not stand to benefit from the store. But Partee said Emerald would bring “well-paying” jobs, generate property and municipal taxes revenues, develop a Positive Impact Plan, donate to local charities such as Construct Inc. and the Berkshire Humane Society, and hold community events such as yoga classes.

Some attendees were also concerned that their property values would decline if a cannabis store was located near them, or that long lines, such as those at Theory, would be difficult to manage. But Partee said the front of the building offers 12 to 15 parking spots, and in the event of an overflow situation, 40 more could easily be created at the rear of the building on the approximately 3-acre parcel.

As The Edge reported earlier this week, Partee is the former president of Positronic Farms, which was charged last year by the office of Secretary of the Commonwealth William Galvin with violating state securities laws, though its founder, David Caputo, has denied any wrongdoing.

Positronic had an application before the Cannabis Control Commission for a license to grow cannabis. In October, Positronic’s entire board of directors resigned and the company considered filing for bankruptcy as Galvin’s investigation continued.

Partee subsequently told MassLive he had submitted his resignation to Galvin. Partee is no longer listed on the company website as part of Positronic’s management team, though Caputo still is. Partee explained his involvement with Positronic Thursday night.

Partee and Moriarty were early investors in Positronic. At one point Partee and other investors suspected something was amiss and were not satisfied with the answers they were receiving from Positronic management.

“We uncovered that the operation was being run completely fraudulently,” Partee said. “It was at that point that we blew the whistle. We alerted all the authorities.”

Attorney Wendy Linscott of Egremont was a lone voice in the wilderness. She could not attend the meeting but submitted a statement, read by Mary McGurn, that cautioned against “the stridently negative tone” she has heard from residents predicting “an enormous and terrible impact” on the town if Emerald received a special permit.

“The building sits quite close to Route 23 which is a heavily traveled major road that serves at least 6,000 vehicles per day, many of them tractor trailers,” said Linscott, who urged her fellow citizens to keep an open mind. “Whatever vehicular traffic the Emerald River operation would attract to 195 Hillsdale Road would be easily accommodated.”

Taconic Lane resident Helaine Kaplan, a real estate attorney, said the proposed store, other than providing tax revenues, would be “killing the character and the make-up of this town and I think this would be an horrific, horrific mistake. All of us would have depleted values in our real estate … I have nothing against what you do. It just should not be here. This is a completely residential neighborhood and all of us are very worried and concerned that you’re coming in and you’ll dry up as soon as New York state legalizes.”

“Thank you so much for that,” Partee replied. “I appreciate you.”

The tone and content of many of the other comments were similarly oppositional. Partee, however, remained unflappable.

Meanwhile, Partee indicated that, having completed the mandatory community outreach meeting, Emerald will begin the special permitting process. Company representatives will meet as soon as possible with the planning board and submit documents. Eventually the board will schedule a public hearing, which must be noticed in legal advertisements 14 days in advance.