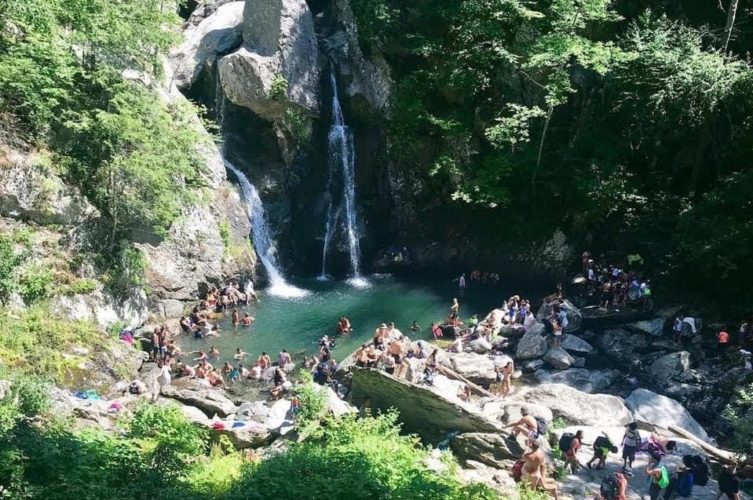 Mount Washington — During the era of the COVID-19 pandemic, Northeasterners have often looked askance at crowded Florida beaches, teeming with unmasked humanity and recklessly spreading the virus. Actually, a New Englander wouldn’t have to look very far to find that kind of spectacle because it’s right in our own backyard.

Bash Bish Falls, a popular but remote destination for sightseers, this past weekend more resembled Fort Lauderdale Beach than a rustic outpost in the Berkshires.

A precise count of the number of people at the falls was impossible to obtain but from photographs, witnesses and state police estimates, it appears that at least 1,000 people packed the small park over the weekend. That in itself would be alarming even in normal times. But during a pandemic in which people are still urged by authorities to practice social distancing, it can be horrifying.

One witness on Facebook, John Sparkman, made his first visit and termed it a “colossal disappointment.” He said there were “hordes of people breaking every single rule.”

As Sparkman described it, Bash Bish was a scene of chaos, with “garbage everywhere, large picnics set up with tables, loud music, board games, shouting, beer, weed, swimming … you name it.”

On the Egremont Posts Google Group, Elizabeth Bledsoe posted a photograph she said was taken on Saturday. The image, seen at the top of this story, depicts scores of people swimming in the pool beneath the falls, and scores more eating and partying on the treacherous rocks that ring the pool. Neither Sparkman nor Bledsoe returned an Edge message seeking comment.

Bash Bish Falls is a Massachusetts park maintained by the state Department of Conservation and Recreation. The falls themselves are in the town of Mount Washington but much of the surrounding area is in New York. More on that later.

Hiking, hunting and fishing are allowed. Swimming is most assuredly not. The park has been the scene of several accidents and deaths over the years, most recently in 2017, when a 21-year-old Ghent, New York, man slipped on a rock and became lodged in a crevice. It took authorities more than a week to recover his body.

In an interview, Tobin said DCR rangers patrol the park and the department increases its staffing in the summer months, “but lately I’m thinking that it might be too much for them.”

“I empathize with the park police on New York side and DCR on Massachusetts side and state police on both sides because those crowds are overwhelming. I know that they are doing the best they can, but they have to be more present … I think they need to have people there full-time walking amongst folks and either issuing some sort of ticket, or a citation for trashing the place.”

With a population of fewer than 200 full-time residents, Mount Washington is the smallest municipality in Berkshire County and the third smallest in the state, and so it has no police department.

“The town of Mount Washington cannot be responsible for what happens at the falls,” Tobin explained.

Tobin is technically the police chief, which basically means he issues gun permits and is the liaison with the state police, which provides police coverage for the town. Tobin said troopers definitely responded on Sunday to his request because he could hear their sirens from his house.

The park has been crowded for much of the summer as people who were sheltering at home during the pandemic sought relief from isolation. But with the oppressive heat and humidity of the last few days, the size of the crowds — and the danger —have increased.

Tobin said vandals trashed the area in early May when the park was still closed. Rebellious parkgoers overturned barriers on the Mount Washington side and left a trail of beer bottles. On the New York side, vandals actually tossed barriers into the Bash Bish Brook.

The park is open but the facilities, including the portable bathrooms, are closed because of the public health crisis. Here are the restrictions imposed by DCR, which, by all accounts, were ignored by most of those who were at the falls this past weekend:

This writer visited the park three years ago and saw people jumping from above and into the pools beneath the falls, a practice that is strictly prohibited. A New York state parks ranger ordered the jumpers to stop or he would have them arrested. Fortunately, they complied. Others prefer to jump a little farther down and into the narrow gorge, which is even more dangerous.

The Edge contacted representatives from DCR and the state police. DCR did not return our message but just before publication, state police spokesman David Procopio confirmed in an email that the park was heavily used by the public over the weekend.

“Patrols from the State Police Troop in Lee spent time checking the park on all three shifts, and troopers on the day and evening shifts also responded for calls for service,” Procopio said. “DCR hired two police details for each day on Saturday and Sunday.”

The victim of the fall was driven to Fairview Hospital by her husband, with troopers following. The victim of chest pains refused medical treatment to first responders at the ambulance that arrived for her.

On Sunday, troopers again visited the park on both day and evening shifts. While troopers were there on the day shift, they were informed of a reported verbal dispute at the falls.

“Troopers spent some time trying to locate the people involved but were unable to do so,” Procopio explained. “About an hour later, while still at the park, troopers were advised by an Environmental Police officer that the issue had been resolved and there were no further problems.”

Procopio said detail officers were actively trying to limit the attendance at the park. During the evening shift, troopers responded to the park for a request to assist detail officers to shut the park down due to overcrowding.

Procopio said an estimated 1,000 persons were in attendance at the park. With the assistance of some local police departments and Columbia County Sheriff’s deputies, the park was successfully cleared. Troopers arrived after diverting from another call at Tolland State Forest to assist at Bash Bish.

One of the unique aspects of this park is that it has access trails for two very different skill levels. Most visitors enter the park off Route 344 on the Copake Falls side, where there is plenty of parking and families and solo hikers alike can tread a gently undulating half-mile dirt path that crosses the state line about 200 yards from the falls themselves.

Advanced hikers can access the park from an entrance on Falls Road on the Mount Washington side. A trail leading from the Falls Road entrance ascends a moderate outcrop, the summit of which offers commanding views of the both the Catskills and, farther to the north, the southern Adirondacks.

From there the trail plunges down a steep ravine that could charitably be described as daunting. Casual hikers seeking a prissy promenade should be warned: this trail is for the physically fit only.

The falls themselves are a sight to behold and, as they drop from dizzying heights and make a sound that is just short of deafening, they certainly live up to their onomatopoeic name.

While the Department of Conservation and Recreation (DCR) manages Bash Bish Falls State Park in the town of Mount Washington, the park connects to Taconic State Park in the state of New York, making the park porous with multiple points of entry.

To provide a safe and enjoyable experience at Bash Bish Falls, parking area restrictions are in place, additional DCR park rangers have been deployed, and the agency has requested additional law enforcement details.

The agency reminds Bash Bish Falls State Park visitors that swimming at the waterfall is prohibited as the area is not a designated waterfront.

In an effort to keep visitors informed of COVID-19 impacts on state parks, the DCR has increased safety signage throughout the state parks system, launched a new Find A Park webpage, and continues to post COVID-19 guidance on social media. Additionally, for up-to-date information on state parks during the COVID-19 public health emergency, please visit the agency’s Massachusetts State Parks COVID-19 Updates webpage.

When visiting state parks and other properties, DCR asks the public to adhere to the following guidance:

If a location is crowded, please consider leaving the area and either visiting a different location or returning at a later date or time;