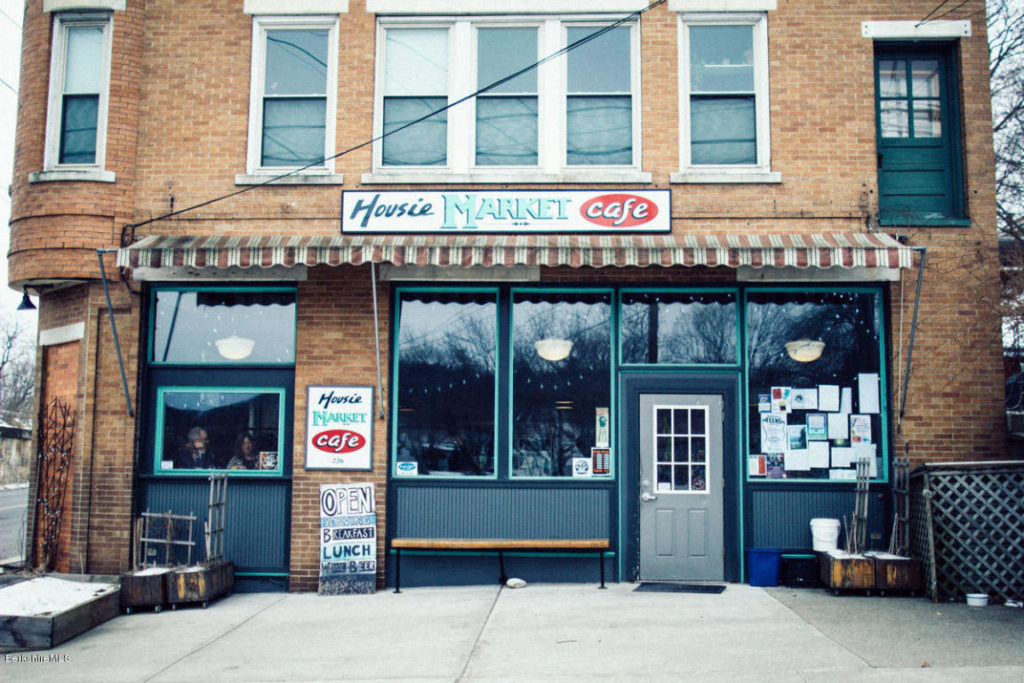 Villagers are hopeful after the now-closed Housie Market and Cafe was sold at a foreclosure auction Wednesday.

Housatonic — A popular village institution that closed last year has been purchased by a local resident. The only question that remains is what the building will be used for.

“I had not thought about this at all, but it was bothering me,” Hollenbeck said in an interview. “It was vacant and there were unknown factors in terms of what it might be.”

The night before the auction, Hollenbeck was having trouble sleeping. He knew about the auction and was concerned about the community losing the iconic location to something less palatable such as an adult-use marijuana retailer.

“I got up next morning and decided I should bid,” Hollenbeck said. “That was it.”

Amy Hagerty, who owned the Housie Market, closed it last October and moved to California to be nearer family. The building at the corner of Pleasant and Front streets was built in 1915 but has since been turned into condominiums. In addition to the cafe, there are apartments on the top floor.

The 2,800-square-foot cafe and storage space in the basement were listed last year by Stone House Properties for $300,000. But there were no takers and eventually the mortgage holder, Salisbury Bank, came calling. That’s what triggered the auction.

At the time of the closing, life in the village was significantly disrupted because of construction on the Park Street bridge. But Hagerty insisted the bridge did not factor into her decision to close—or at least not nearly as much as the difficulty she had in finding help. The closure left a gaping hole in that part of town.

Hollenbeck, who also chairs the Great Barrington Libraries board of trustees, said he’s not sure what he wants to do with the property. He plans to meet with Caiola this weekend to discuss some ideas. He anticipates closing on the deal in mid-August but has no other timeline.

At this point, Hollenbeck said he is open to many ideas. He’s not even sure whether he wants to start something himself or find a suitable tenant and be a landlord. He does want something that has “year-round sustainability.” Above all, though, he recognizes the importance the cafe had in village life and the bond many residents and workers felt to it.

“I was amazed at the public sentiment and had no idea how emotional people were,” Hollenbeck explained. “At the beginning of the auction, there were at least two or three people with tears streaming down their faces. Amy was unbelievable for that community. It’s more than a vacant corner store, that’s for sure.”

In a random sampling of opinion conducted by the Edge, the response to the Hollenbeck acquisition was overwhelmingly positive. Bettina Montano, who heads Berkshire Pulse, a dance education facility, said the cafe received heavy use by students and parents alike.

Even when the Park Street bridge was completely closed to vehicular traffic, as it was after a steel construction beam collapsed into the river in April 2017, pedestrians could still walk across it to get to the cafe.

“I’m so glad something is happening,” Montano said. “It’s a pivotal location where our little village is concerned. It’s nice to know some energy will be returning.”

The cafe was a very important space for Pulse. When it was open, students, parents and staff were at the cafe on a daily basis. Indeed Montano held many a meeting there.

“Students got off the bus and might have a wait before class,” Montano said. “They could get something to eat. My own two kids always appreciated that market. It’s really been missed.”

Montano noted the irony that the Park Street bridge only fully reopened a couple of weeks ago but, now that traffic can proceed unimpeded across the Housatonic River, the Housie Market and Cafe is empty.

“For over a year, this little village has been practically shut down,” Montano said, a note of relief in her voice.

To Montano, the Housie Market and Cafe ranked right up there with the other attractions in the village: The Ramsdell Library, the park next to the old Housatonic School, and Pleasant & Main, a cafe that is now one of only two restaurants left in the village, along with Caiola’s Brick House.

Loubert, who is also a member of the town finance committee, described Hollenbeck as “an exceptional person with incredible vision” and said she shared his concerns about what could have occupied the space if it had been vacant for too long.

“I’m so very happy that the market is in good local hands and I really hope that Mr. Hollenbeck can work out something great with Mark from the Brick House,” added Ellen Lahr, another longtime Housatonic resident who runs a public relations business in the same building as Pulse. “We really need back our Housie Market hub for the food and the community, and lots of business deals got hashed out there, as well. With the Brick, Pleasant and maybe a new market cafe, we will have a great little food triangle in the village.”

“We are thrilled that the Housie Market will have a new life,” added Fred Clark, an architect and longtime village resident who lives with his wife, Karen, on Park Street. “Housatonic is a family community and we were sad when the Housie Market closed. Patrick Hollenbeck cares deeply for Housatonic and I am sure that any project he is a part of will be a treat.”

“I, too, am concerned over what I feel is a flood of retail marijuana establishment applications in the Great Barrington community,” Loubert said, echoing Hollenbeck. “I am sure, eventually, such an establishment will want to locate in Housatonic, and I can relate to Mr. Hollenbeck’s concern.”

“I have nothing against marijuana,” Hollenbeck explained. “But we wouldn’t want five McDonald’s in the town either. We need something that’s going to help this community, not bring it down.”

Hollenbeck, a professional musician himself, said he has heard from some people who would like to turn the space into a music venue. And he is certainly open to that, as well. Hollenbeck is a classically trained percussionist and orchestrator who has worked extensively with the Boston Symphony Orchestra and the Boston Pops.

Hollenbeck said Caiola, who could not be reached for comment, has “some great ideas.” The community is surely hoping something outstanding comes out of Hollenbeck’s inspiration.

“It was great place to hang out and and also be social with other parents,” Montano said of the old market and cafe. “I hope that it can again be something. It was just a great place to be.”