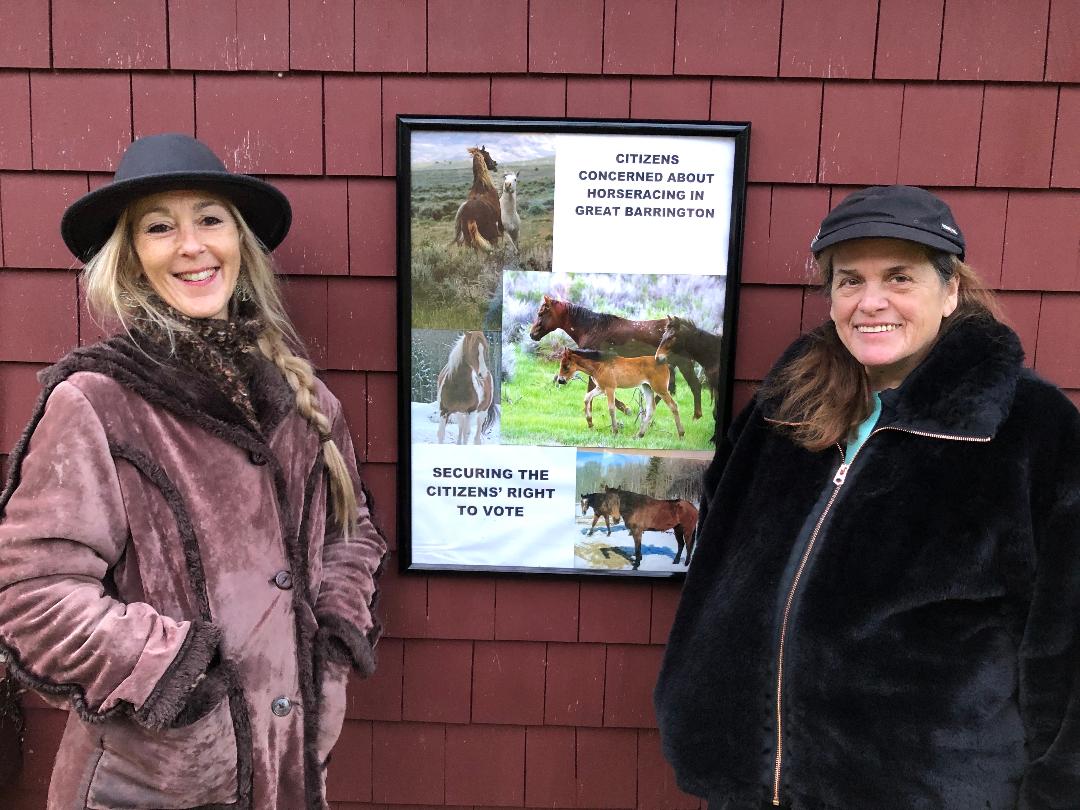 Great Barrington — Its proponents see it as democracy in action. Its detractors view it as a thinly veiled attempt to thwart the return of horse racing to the Great Barrington Fairgrounds.

At any rate, a home rule petition approved almost unanimously by Great Barrington residents at a special town meeting Dec. 11 was collected at town hall last week and filed on Beacon Hill as a bill, HD.4700, by state Rep. William “Smitty” Pignatelli, D-Lenox. The petition will also include the name of state Sen. Adam Hinds, D-Pittsfield, and will proceed as a joint petition.

“They have filed this bill on Beacon Hill,” wrote three founding members of Citizens Concerned About GB Horseracing, all of whom submitted a joint letter to the editor of The Edge this week. “Of course they must now ensure that it goes to the best committee for its passage.”

The original bill, Senate Bill 101, that sparked the current controversy was referred to the Joint Committee on Consumer Protection and Professional Licensure, where it is still pending. Pignatelli told The Edge the chances that the home-rule bill will end up in that same committee are practically zero. He anticipates that the bill will wind up on the Joint Committee on Municipalities and Regional Government and that it will likely pass in the state legislature.

“I do not not anticipate any issues whatsoever to get the home-rule bill through,” Pignatelli said in an interview. “We’re a home-rule state. Whatever the town wants, I am for.”

The move to start a petition came shortly after Hinds, who had co-sponsored the bill that would have allowed Sterling Suffolk Racecourse to restart racing in Great Barrington for a few weeks in the fall, withdrew his sponsorship of Senate Bill 101 under pressure in September.

There is no proposal currently before the town but Sterling Suffolk Racecourse, which operated the now-closed Suffolk Downs, has reached a lease agreement with fairgrounds owners Bart and Janet Elsbach to bring thoroughbred racing back to Great Barrington for up to 40 days in the months of September and October with the goal of starting in 2020, though that timeline seems unlikely at this point. The company expects to spend between $15 million and $20 million on the project.

But in order to accomplish that feat, Suffolk needs a change in state law to permit it to hold races in Great Barrington while at the same time allowing it to maintain its simulcasting and remote betting operations back in East Boston.

But even if Suffolk succeeds in getting the legislation passed and even if it did not need to win a townwide referendum, Suffolk would still need up to three special permits from the Great Barrington Selectboard, in part because much of the fairgrounds property is in a floodplain along the Housatonic River.

“In Great Barrington’s case, the selectboard has special-permit-granting authority,” Pignatelli said. “All of the authority falls into their laps. They can say no. The town has total control.”

A successful home rule petition, on the other hand, would mandate townwide approvals for horse racing, both by referendum and town meeting, in addition to the required special permits.

Selectboard member Leigh Davis first raised the issue at a board meeting July 22, not long after learning through media reports that the town was not represented at a public hearing on the bills in Boston July 1 before the Joint Committee on Consumer Protection and Professional Licensure.

After asking in advance that the item be put on the agenda, Davis raised a series of questions about the lack of local control. This week she posted news of the home rule petition on the Google group The HillGB. Click here to read it.

Citizens Concerned About GB Horseracing says the vote at last week’s town meeting sends “a clear message,” not only to Hinds, Pignatelli and the whole legislature, “but to the Massachusetts Gaming Commission,” which oversees and licenses horse racing in the state and “to every Great Barrington Selectboard member.”

Pignatelli added that he does not see Senate Bill 101 as a stand-alone bill on the floor of the legislature but he thinks it will become part of a larger more comprehensive piece of legislation that includes simulcasting, or off-track horse race betting, which is much more lucrative than on-site racing.

Not everyone was thrilled with the home rule petition. Reed Street resident Laura Keefner, who spoke in favor of horse racing at last week’s town meeting, told The Edge in an email: “This town has been taken over by people who think their ideas are the ideas that everyone should adopt. They want to dictate where and how I spend my money.”

“The fairgrounds are a dump,” Keefner said, as she did last week. “This town has the potential of seven pot shops, but they think that is okay.”

Keefner is a supporter of horse racing, in part because the town already has so many “boutique shops, expensive grocery stores and restaurants. It has become a mini NYC or Boston.” Keefner also complained of being “humiliated and booed” at the town meeting when she spoke, while those speaking in favor of the petition were cheered.

“How do you think that made me feel?” Keefner asked rhetorically. “My voice didn’t mean squat.”

Just before deadline, Davis sent The Edge the following statement:

I’ve kept in close contact with Senator Hinds and Representative Pignatelli and they have our backs. I’m confident the voices of the citizens of Great Barrington will be heard through the passage of the Home Rule Petition into law.

What still concerns me, however, is that the Town has still not been able to find evidence of a local vote on horse racing and that the language in Senate Bill 101 containing the loophole which I had flagged back in July remains.

I think there is still work for us to do to ensure that our voices are heard through lobbying the Joint Committee on Consumer Protection and Commercial Licensure to strike out this sentence. This will ensure that if S101 moves forward or is ever rolled into a bigger gaming bill, that this does not come back to bite us.