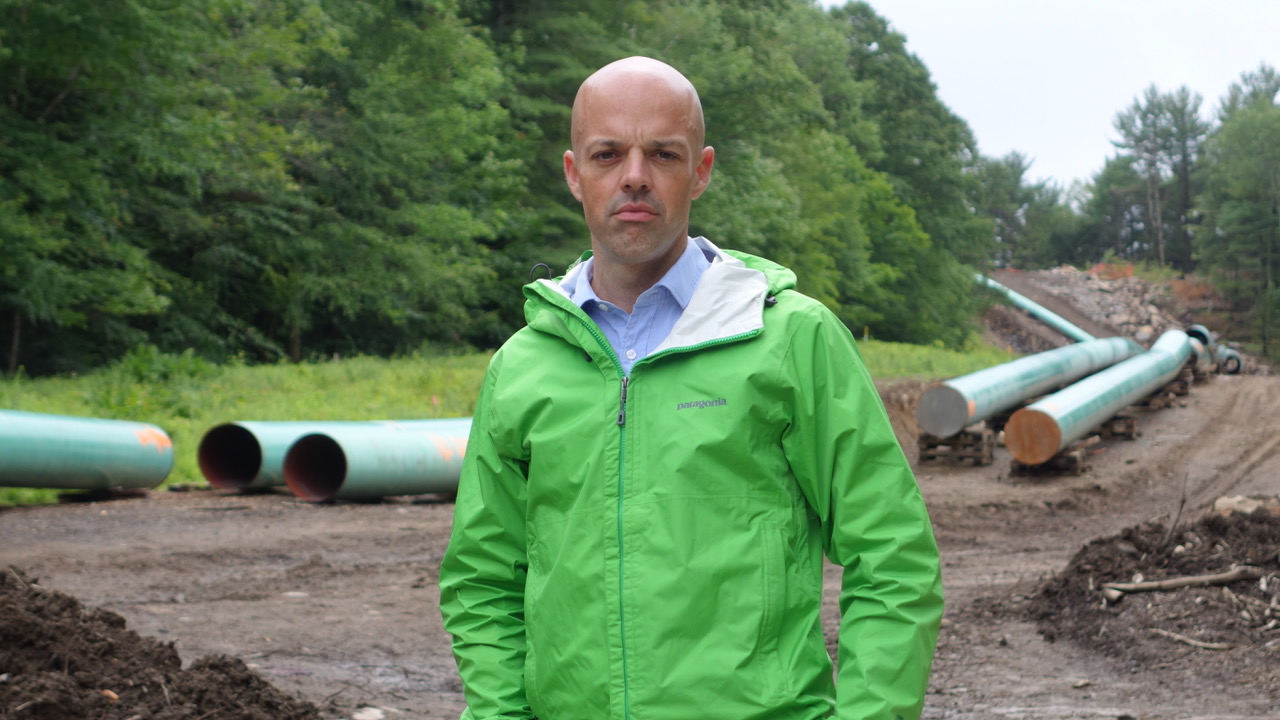 Sandisfield — As it has been periodically, the landscape at the Thoreau Cabin pipeline barricade on Sue Baxter’s property was populated with protesters, dozens of whom have been arrested and charged with trespassing over the last several weeks–even a 98-year-old woman.

Monday it was state Sen. Adam Hinds’ turn. The Pittsfield Democrat and first-term lawmaker walked down to the cabin Monday afternoon with a handful of aides and used the occasion to applaud the protesters’ efforts–unsuccessful to this point–to stop the project. And he had strong words for the Trump administration and its treatment of the federal Environmental Protection Agency.

“If anybody’s learned anything from this election, it’s that elections have consequences – serious policy consequences,” Hinds said on this unseasonably cool and overcast day. “And it’s only by getting out there and organizing and being a part of the process that we can even hope to have an impact, and so it’s always great to see folks who are choosing to come out and make their voices heard.”

Hinds also opined about the “deeply concerning actions” of the Trump administration in the area of environmental protection and in withdrawing from the Paris climate accords.

“They are absolutely gutting the EPA at a rate that even the most pessimistic person would be surprised about right now,” Hinds said.

As have many pipeline opponents, Hinds had strong words for the Federal Energy Regulatory Commission, which issued a notice to proceed in April enabling Kinder Morgan to move aggressively to complete the project, even as U.S. Rep. Richard Neal and U.S. Sen. Elizabeth Warren demanded to no avail that FERC revoke the notice.

“Clearly with FERC, they’re missing an opportunity,” Hinds said, adding that Massachusetts has a strong record for energy efficiency and in generating power from renewable sources.

In addition, he applauded Gov. Charlie Baker’s move to join a multi-state climate alliance, a coalition of states committed to fulfilling the tenets of the Paris climate accord despite Trump’s decision last month to withdraw from it.

“You look at the deliberate choice by the rest of the world to say, ‘You know what, our energy production is moving in the direction of renewable energy and the markets are dictating that,'” Hinds said to hearty applause from the 30 to 40 pipeline opponents at the site. “Talk about preaching to the converted.”

But Hinds did not limit his words for Trump. He was also sharply critical of the state in allowing the pipeline project to move through the Otis State Forest, which is state-owned land ostensibly protected from development.

Especially galling to the Sugar Shack Alliance, Hinds and other pipeline opponents is that public lands in the state are supposed to be protected by Article 97 of the Massachusetts Constitution, which says “the people shall have a right to clean air and water … and the natural scenic, historic, and esthetic qualities of their environment,” with the fulfillment of these rights to be carried out through state parkland acquisition and conservation.

After the company sued to continue, Berkshire Superior Court Judge John Agostini ruled in favor of Kinder Morgan subsidiary Tennessee Gas Company, basing his opinion on the Supremacy Clause of the United States Constitution, which gives federal laws such as the 1938 Natural Gas Act precedence over state laws when conflicts occur.

An audience member who did not identify himself said new legislation in Washington, Senate Bill 1460, would give FERC enhanced authority over pipelines and will likely be voted on this week.

“It has energy provisions in it, and just rolls over all these communities and enhances the fossil fuel industry’s death grip on our energy policy,” he said.

“Every time you hear something like this coming up in Washington, you hope the paralysis will get the better of them, right?” Hinds said with a mixture of disdain and humor.

But the senator’s words of encouragement could not mask the ongoing work on the pipeline project. Pipes have already been buried along large sections of the easement near the cabin off of Cold Spring Road, though exposed pipes that had yet to be buried could be seen to the north.

A golf cart-style vehicle carrying security workers hired by Tennessee Gas drove by the cabin before Hinds and members of the Sugar Shack Alliance spoke. Baxter asked the guards to cut their engine or drive away so that the speakers could be heard. The three men in the cart reluctantly complied.

Baxter, who owns a home and land abutting the pipeline easement, is a member of Sandisfield Taxpayers Opposing the Pipeline. She spoke for 10 minutes about various transgressions committed by Tennessee Gas during the months-long ordeal. Without elaborating, Baxter also said she was disappointed by the actions of Massachusetts State Police during the project.

Baxter held aloft a printout of Kinder Morgan’s published “values” statement, which the company says includes: “honesty, integrity and respect for people.” She laughed loudly at those assertions, given what she has had to put up with since the construction began.

Bob Barba and Will Elwell are members of Sugar Shack Alliance, an environmental advocacy group that took its name from the Clamshell Alliance, which made its own name trying to stop a nuclear power reactor from being built in Seabrook, New Hampshire, in the late 1970s.

Elwell, a retired timber framer, built the 10-foot-by-15-foot Thoreau cabin and vowed to put it right in the path of the planned Northeast Energy Direct pipeline, another Kinder Morgan project, near his home in Ashfield. As was the case with Sandisfield, the Ashfield site became the focal point for demonstrations and sit-ins.

Kinder Morgan relented and Sugar Shack moved the cabin to Sandisfield. The company, however, did not altogether abandon the NED pipeline that would convey fracked natural gas to ports along the eastern seaboard for export to Europe. Rather, Kinder Morgan “suspended” the project, leaving open the possibility it may revive the pipeline construction should circumstances change. Recently, there have been indications that the company may try again.

Both Elwell and Barba scoffed at the notion that the Connecticut Expansion Project is just a “short stretch of pipeline in western Massachusetts.”

“The goal of this industry is to build all these little sections of pipeline, link them up into one giant pipeline to get this glut of gas to the foreign market where they can make a killing at our expense,” Barba surmised. “So we can’t be fooled by the fact that this is just a short spur of a pipeline to store some gas for the Connecticut market.”

Since it’s all but impossible for Sugar Shack to achieve the same result as it got in Ashfield, one protester summed it up quite nicely. Rebecca Bradshaw was seated atop a lifeguard tower recently erected that overlooks a stretch of the now-muddy easement. It’s dubbed the “USS Baxter Lifeguard Chair” since Baxter can frequently be seen perched atop it.

Declaring herself “opposed to more fossil fuel infrastructure,” Bradshaw said she was looking to inhabit “a more tolerable planet.”

“Even more so, we object to the construction of fossil fuel infrastructure on conserved public land,” added Barba.

From the Guthrie Center in Great Barrington, the Hoping Machine singers sang the Pete Seeger song “If I Had A Hammer” and Woody Guthrie’s “This Land Is Your Land.”

With that, Hinds spoke to a few constituents, answered questions informally from the news media that had assembled at the site, said he was already late for his next appointment and left for parts unknown.

Below are videos, taken by Terry Cowgill, of the remarks by  participants in Monday’s protest: